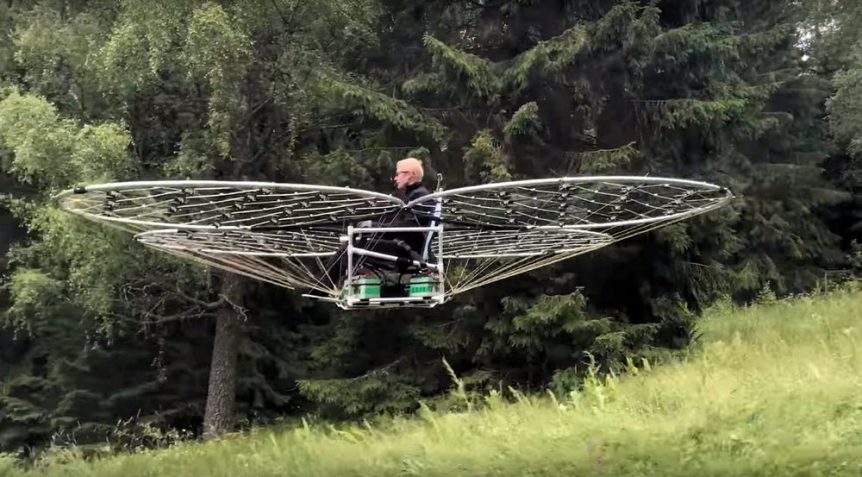 New Atlas (formerly Gizmag) alerted your editor to this web site, which in turn features over a score of YouTube videos on this fascinating project in Sweden.  Axel Borg has created, as promised by the web site, an Amazing DIY Project, flying around a hilly woodland on the power of 76 electric motors.

Undaunted by Fuel Fumes or Crashes

More amazing, perhaps, he tried this configuration a year ago with eight internal combustion engines (extremely noisy), but managed to crash that.  Resisting the fear that would instill in queasier souls (your editor, for instance), Axel made four tubular rings, within each of which is mounted a set of 19 motors.  The four rings surround the pilot’s seat, under which are mounted four battery packs – each one supplying a set of motors with power.

Axel has apparently done a good job of managing the control of the machine, showing in several videos his ability to maneuver in roll, pitch and yaw, and describing how he’s programmed proportional and integral (PI) settings in the controllers to a point where he’s pleased with the results.  All the flights so far, and for the immediate future, are purposely kept at a low level.  Axel reports, “I’m not flying higher since I do not believe in reincarnation.”

A great deal of the control comes from the FC 5x KK 2.1 running stock 1.6 firmware.  This multi-rotor control board is a compact gem that sells at commodity prices – around $13 on sale at Hobby King.  It takes in signals from the on-board gyro and uses that data to control the electronic speed controllers that in turn control each motor.  The board can be programmed at a fine level as noted above.

The 76 motors are Turnigy Multistar Elite 5010, 274 Kv units.  Hobby King, apparently a favorite of Axel’s, sells these for $60.96 each.  The 274 kV is a velocity constant indicating the motor turns at 274 rpm for every volt applied – the high speed at maximum voltage making for a buzzy flight experience.  Axel doesn’t identify the carbon-fiber propellers in his YouTube notes.  Each outrunner must produce at least 4.69 pounds of thrust to hold the chAIR in level flight, and a bit more to make it climb.

Each motor is connected to an Afro 20-Amp, HV (high voltage) electronic speed controller (ESC).  Axel fitted a 63 Volt, 330 uF low ESR capacitor to each ESC “to handle the long current path from [the] battery to the ESC.”  Batteries are split into four packs of 20 each and feed the 19 motors per ring.

Overall control flows from five Turnigy TGY-i6S Digital Proportional Radio Control Systems.  These radio control units are extremely sophisticated for their $57.65 price.  Most components for this build came from Hobby King, allowing a total cost around $10,000.

Certainly, such low costs allow experimenters to explore less-likely areas of flight.  That control can emulate industrial PID (proportional, integral, derivative) process and environmental controllers for such low prices and at such low weights allows double and triple redundancy without breaking the bank.  Such controls could make all our aircraft safer, with perhaps control limits that would prevent dangerous maneuvers or overstressing structures.  Some ready-to-fly radio control models come with a form of anti-crash technology, preventing stalls or inadvertent descent into the ground.

You can see Axel’s build in this video.  Other early videos show the construction of the IC-powered version and its eventual demise.

An unidentified South Korean flies his 12-rotor machine, much like an inverted eHang 184, with larger motors and initially in a yard overhung by threatening wires.  Later flights take place in a more bucolic setting and show good control of this compact machine in all axes.

The one plus factor on this machine is the placement of rotors above the cockpit, although the lower blades could threaten the pilot’s safety.  This is still better than the potential for bodily harm from fragmenting rotor blades on so many multi-rotors.

Regardless, the model aircraft world seems to be melding into the real airplane world, with potentially widespread experimentation and possibly successful home-made commuter machines as a result.