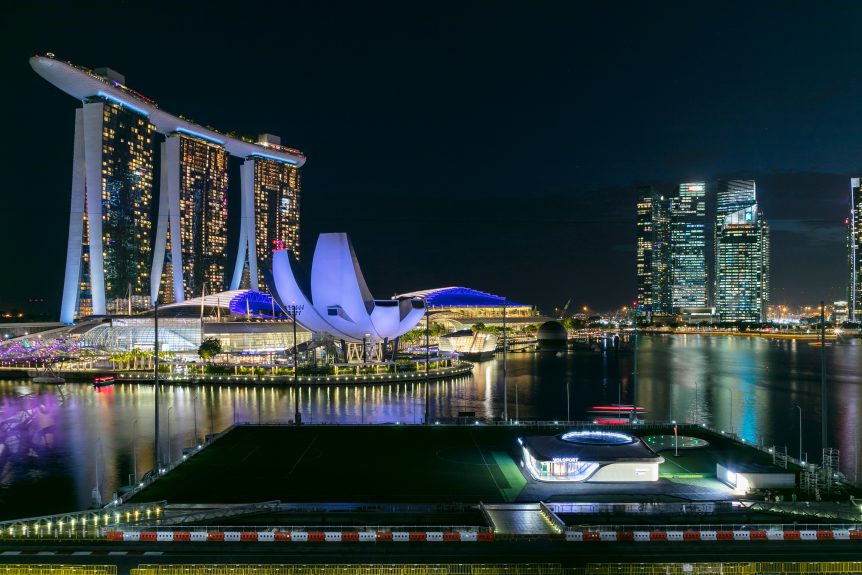 Volocopter flew the latest version of its two-seat sky taxi, the 2X, on a two-minute, 1.5-kilometer excursion around and over Singapore’s Marina Bay on October 22.  This short flight, surrounded by massive, futuristic skyscrapers, highlighted the controllability of the small machine and its ability to use minimal infrastructure, taking off from and landing on a simple grass plot.

Florian Reuter, CEO of Volocopter, applauded the flight’s verification of his vision.  “The flight today in Singapore was the most advanced Volocopter flight yet and the piloted flight was as stable as ever. At the same time, we are showcasing a prototype of our full-scale VoloPort Infrastructure, allowing for a realistic demonstration of air taxi boarding and maintenance services. Never before have people been this close to experiencing what Urban Air Mobility in the city of tomorrow will feel like.”

Perfect for commuting on the island, Volocopters would enable transit across the 50-kilometer (31-mile) width and 27-kilometer (17-mile) north-to-south span.  It would make access to the offshore islands an easy trip.  Landing atop Singapore’s tallest buildings would be more taxing than surmounting its highest geographical point, Bukit Timah Hill at 182 meters (597 feet).

The October 22 flight was the last in a series of “demanding test series to verify and validate the ability of Volocopter air taxis to flyover the area.”  Results were signed off by the Ministry of Transport (MOT), the Civil Aviation Authority of Singapore (CAAS), and the Economic Development Board (EDB), who will also oversee future efforts.

Mr. Ho Yuen Sang, Director (Aviation Industry) from CAAS validates that thought. “Since late 2018, the Civil Aviation Authority of Singapore (CAAS) has been working with Volocopter to facilitate this flight in Singapore. The Volocopter team went through a series of stringent evaluations to ensure that all the necessary safety requirements were met before the flight was allowed to take place. By working closely with companies such as Volocopter, we hope to facilitate innovations for beneficial uses whilst ensuring aviation and public safety,” 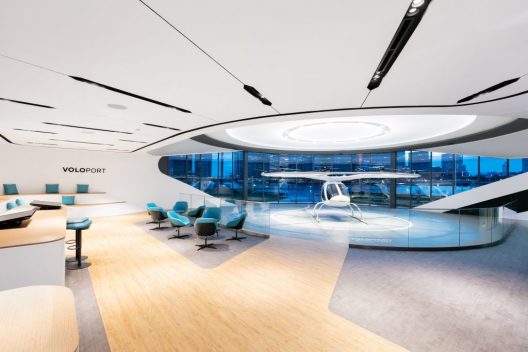 Voloports will be an integral part of developing this enterprise.  Florian Reuter, CEO of Volocopter, explains, “There are three major aspects that need to be in place for urban air mobility to become reality: the aircraft, the infrastructure, and the necessary regulation for both. Standing inside the VoloPort makes Urban Air Mobility feel extremely real and demonstrates that air taxi operations are not a faraway future, but very feasible to achieve within the next two to five years. Today marks a fantastic step forward!”

As a sign that Volocopter intends to press on with flight in Singapore, their Voloport prototype on the Float @ Marina Bay opened as part of the ITS (Intelligent Transportation Systems) World Congress this year, and will bring on a full local staff by 2020.

With Volocopter and eHang (flying its board of directors, no less) having made public flights while carrying passengers or a pilot, the impetus to reach production and develop a customer base seems to be burgeoning.  Others are announcing formerly unpublicized test flights, and seem to be edging toward more public demonstrations.  Lilium and Airbus may soon be part of the news cycle, along with Kittyhawk and the contestants in Boeing’s GoFly competition.  We are about to see a jump in public interest.