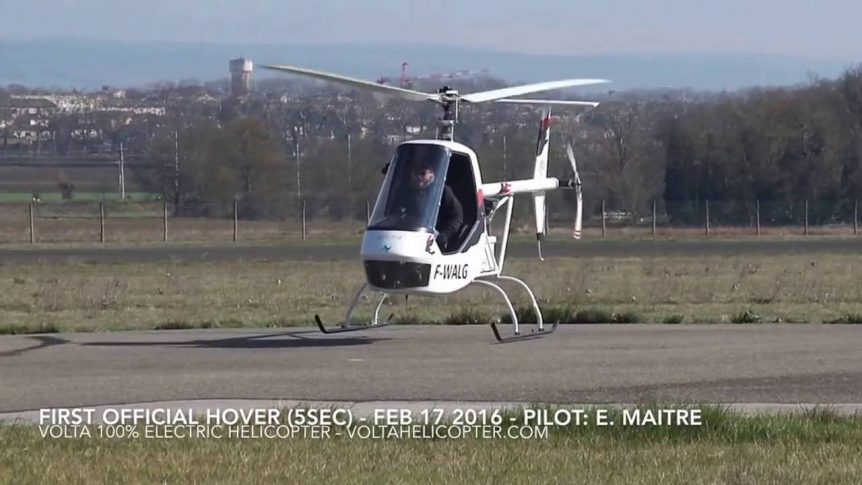 The Volta is a French electric helicopter, and has been setting endurance records with almost every flight, it seems.  From its first hovering on February 17, 2016, and a first “official” three-minute flight on October 19, Volta has risen to new heights and set new “bests” for itself. 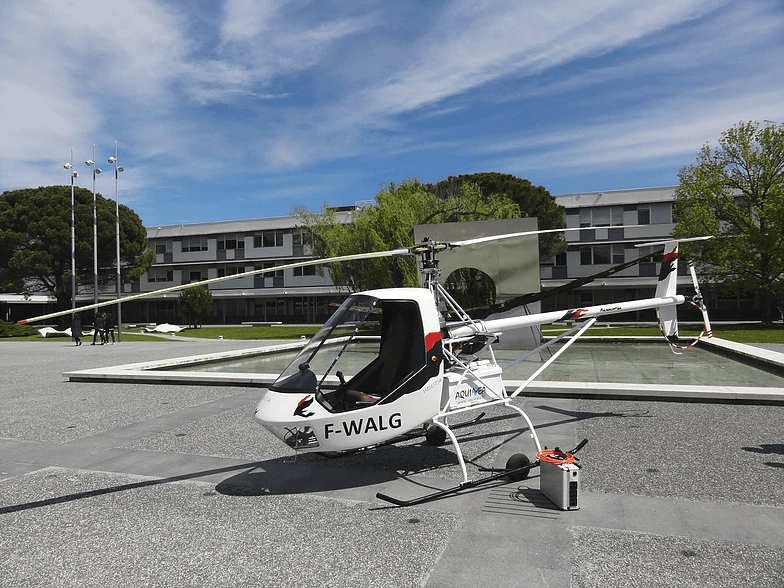 Volta awaits yet another test flight

Volta is based on Microcopter MC1, a one-of-a-kind model designed in 2004. Propelled by a Subaru engine “that was never successfully regulated,” the MC1 was an ultralight helicopter of conventional design that caused Philippe Antoine to see its possibilities as an electric machine.  Incidentally, you may still be able to get plans for the MC1 from Redback Aviation.

Antoine replaced the fossil-fuel power train with an electric one, including an Enstroj motor.  Interestingly, Aquinea, a swimming pool heating vendor, sponsors the effort and ENAC, the Ecole Nationale de l’Aviation Civile (The National School of Civil Aviation) provides technical support.  He has transformed this unassuming-looking copter to cleaner operation, noting the following advantages for an electric craft:

“The atmospheric pollution is reduced to zero locally. The noise is reduced since there is no internal combustion anymore. And the maintenance cost is highly reduced, as the power chain is much simpler. 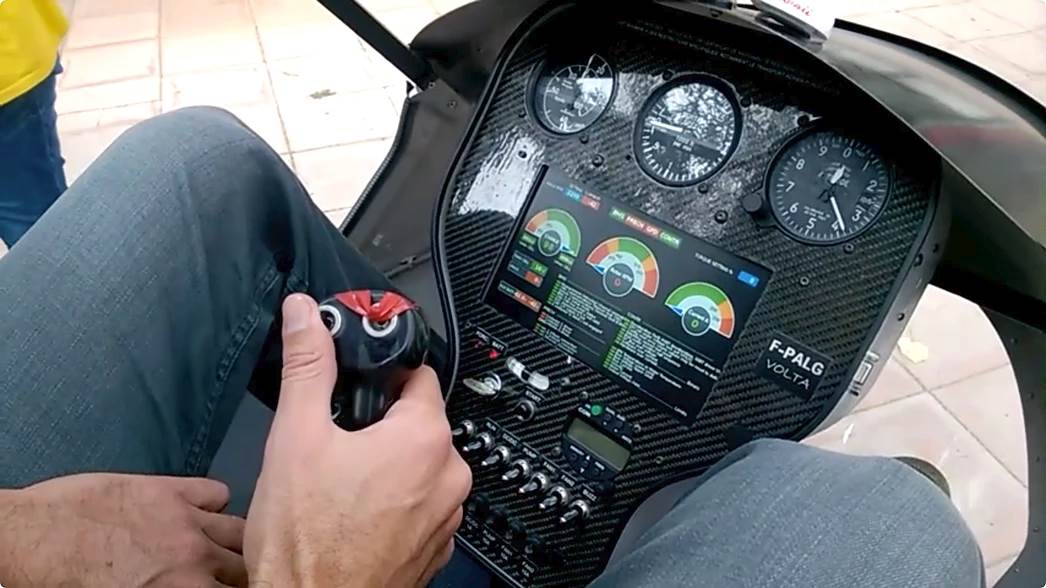 Volta’s instrument panel, looking very conventional with the exception of the glass panel

​“Volta is a conventional helicopter, with a main rotor and a variable blade pitch. Compared to drone-like helicopters with a variable spinning speed, Volta is more efficient, has auto-rotation capability, and is compatible with current airworthiness regulation. Volta builds upon decades of experience and experiments on vertical flight.”

Working with ENAC HCI researchers, he developed the avionics for the machine, while test-bedding their djnn technology.  This software development tool enables interactive responses between an operator and a machine. 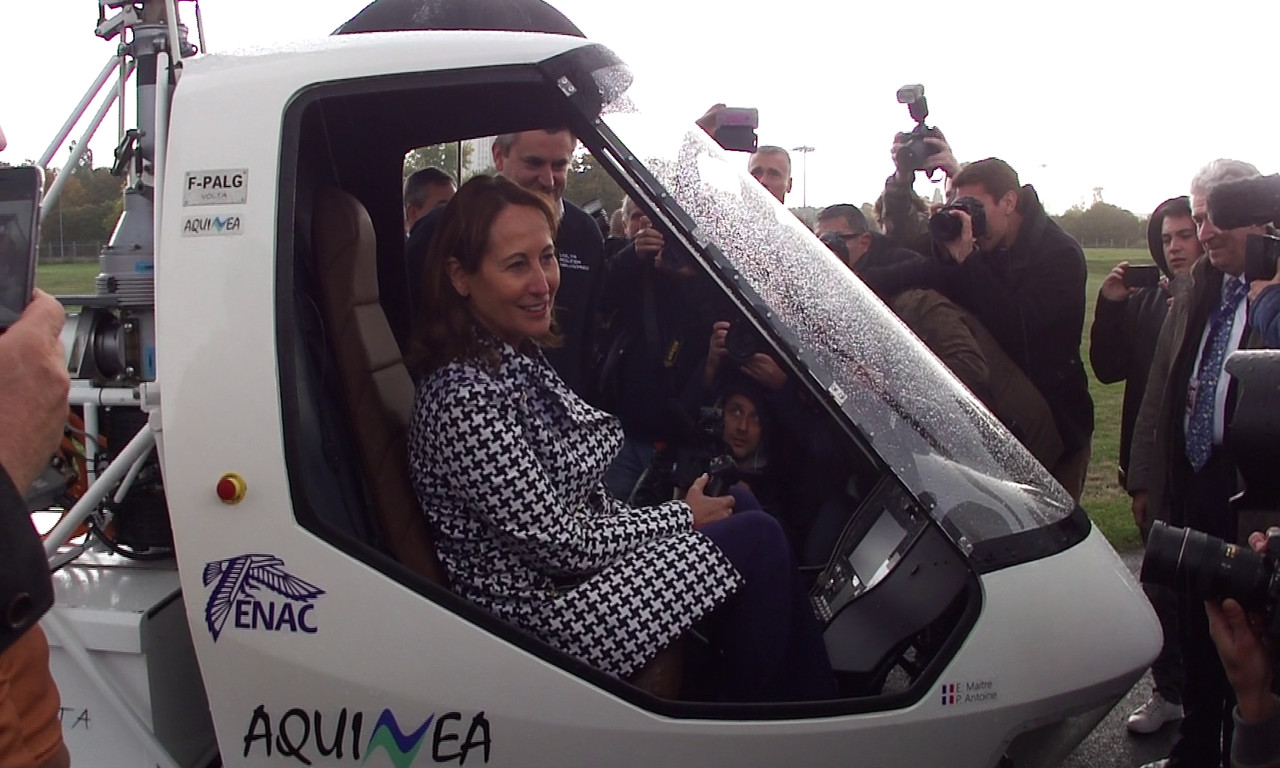 Mrs. Ségolène Royal, Minister of the Environment and Energy, tries out the Volta’s controls

Volta made its “official” public flight with the Minister of Environment and Energy Mrs. Ségolène Royal, on the Heliport of Paris-Issy-les-Moulineaux.  Other personalities included the Director General of Civil Aviation, the head of Aéroports de Paris, and the Mayor of Issy-les-Moulineaux.   The media was much in evidence.

And, with patience, you can view Volta’s later record-setting 15-minute flight here:

The single-seat Volta, flying these 15 minutes, pretty much in ground effect, has demonstrated its ability to hover for the duration of its batteries’ energy storage.  The developers hope to create a two-seater with up to forty minutes’ duration.   Its display at the 2017 E-Flight Expo has probably excited further interest in this interesting helicopter.