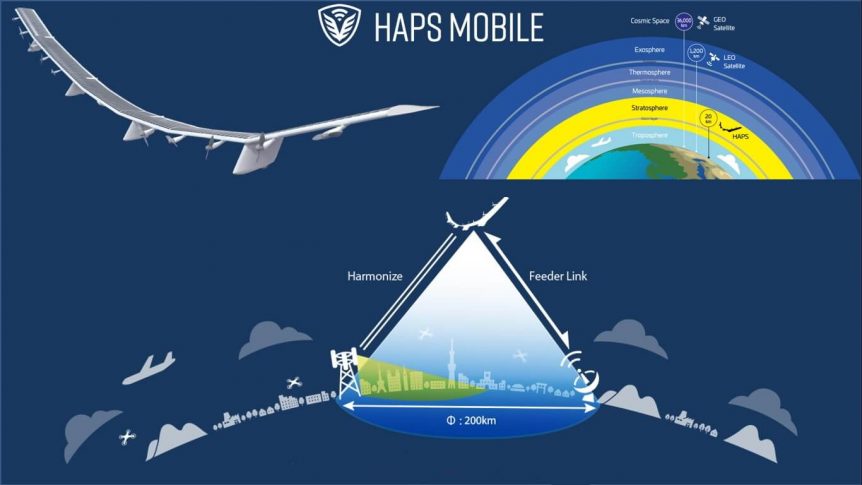 What do a Japanese investment bank, a software network, balloons and a gigantic stratospheric flying wing called HAPS have in common?   Let’s look at the players and then piece together this puzzle.

“The company is known for its leadership by founder Masayoshi Son.[15] It operates in broadband, fixed-line telecommunications, e-commerce, internet, technology services, finance, media and marketing, semiconductor design, and other areas.

The Group expands on this with a vividly-produced video promoting their idea as to how using high technology can bring about a Utopia long dreamed of by philosophers and inventors.  (Your editor is a bit skeptical, having seen large display ads in year 2000 Silicon Valley airports extolling the coming millennium because of 13-micron lines on new computer chips.  Somehow, the world did not change in a dramatic or blindingly positive way.)  The technology is wonderful, but maybe over-rated here for its effects on our collective soul.

SoftBank has a more upbeat end to the story, though.  Their investments will bring happiness to all. “The answer is simple: to bring happiness and give inspiration to people — a vision that has guided us since our founding and is encapsulated in our corporate philosophy.

At a more pragmatic level, the means by which SoftBank and its partners have managed to create a worldwide communications network are truly wondrous.  Their aspirational corporate video shows an optimism rarely found in the modern world.

SoftBank has an ambitious agenda for the new technology it is to employ in its sky-borne 5G/LTE networks.

LOON, a Google Alphabet project, uses balloons to transmit Internet communications to ground-based users.  Up until now, such signals came from ground-based stations or satellites.  LOON fills in the celestial/terrestrial gap with stratospheric balloons that can fill in electronic communications gaps for half the world’s land mass, the 3.8 million people who don’t have access to the internet, and those who lack adequate access.

Loon recently achieved an important milestone: “Our balloons have flown over 1 million hours in Earth’s stratosphere. In all of those hours aloft, Loon’s balloons have traveled nearly 40 million kilometers — enough to make 100 trips to the moon or circle the Earth 1,000 times.” 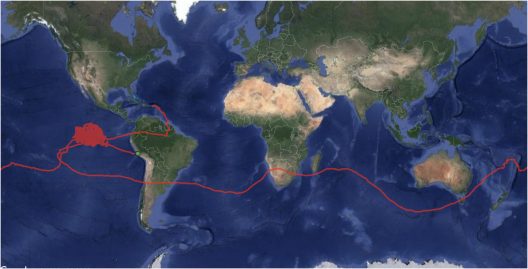 Flight of the LOON: 312 days around the world from Puerto Rico to Mexico

One LOON managed to take a world tour lasting 312 days, a meandering journey that took it from its launch site in Puerto Rico to a landing in Mexico.  TechCrunch.com reports, “The balloon in question took off from Puerto Rico in May 2019, and then made its way to Peru, where it took part in a service test for three months. It then headed south over the Pacific Ocean, and finally ended up in Baja, Mexico for a landing in March this year. Loon’s CTO Sal Candido said in a blog post that the record-setting flight is the result of the company’s continued work on advancing its technology and pushing both hardware and software forward in new and innovative ways.”

Like traditional balloons, LOONs drift on wind currents, but at stratospheric altitudes between 50,000 and 70,000 feet.  The folks at LOON explain, “We’ve created what is essentially a stratospheric submarine that utilizes the sun, the air, some pretty cool machines, and a collection of smart algorithms. A solar-powered pump* adds or subtracts air from the balloon. That air makes the balloon heavier or lighter, allowing it to ascend or descend in altitude. Rather than fight against the wind at one altitude, the balloon moves up or down until it finds a favorable wind current. By repeating this thousands of times over the lifespan of a balloon, we can drift on the winds to get to locations around the world.” 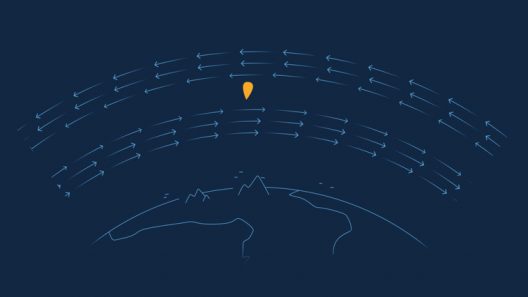 This artificial intelligence approach would probably exhaust a human aeronaut, and the people at LOON have a bit of fun with a Saturday Night Live reference to their AI version.  “We’ve called various versions Hans and Franz because, of course, they’ll pump you up.”

HAPS, High Altitude Pseudo Satellite (or High Altitude Platform Station in HAPSMobile terminology) comes from AeroVironment, and is an improved version of its earlier segmented flying wings that achieved altitude records.  Like a satellite, it flies in a regular pattern – unlike a LOON, which is subject to winds aloft.  It fits in the altitudes between geosynchronous near-space satellites and ground-based transmission towers.  That means it can cover a broader area than terrestrial antennas.  HAPSMobile estimates it would take tens of thousands of existing terrestrial base stations to cover the entire Japanese archipelago.   The same area could be covered by just 40 HAWK30s.

Think, too about satellite radio, which overcomes signal blanking from tall buildings and hilly or mountainous areas that interfere with high-frequency signals.  Placing transmissions towers, usually on the tallest promontories in a region, is a dangerous enterprise: launching and retrieving large HAPS a much less hazardous business.

Even better, airborne or satellite transmitters are impervious to disasters on the ground.  Transmission towers can be brought down by fires, earthquakes and other catastrophes.  Maintenance of terrestrial towers is itself a dodgy thing, and fatalities are common.

HAPSMobile explains that, “The ‘30’ in the HAWK30 name refers to the fact that, at a latitude of plus or minus thirty degrees from the equator, the HAWK30 can fly 365 days a year. In fact, the HAWK30 can fly even in high-latitude areas like Japan, which lies between the 24th and 46th northern parallels, most of the year, with the exception of winter months when daylight hours are few. A ‘HAWK50’ model, which can fly plus or minus fifty degrees from the equator, is now in development with the goal of enabling stable service regardless of the season.”

HAPSMobile makes another interesting point.  Light and radio waves travel at the same speed – about 300 million meters per second (3.0 x 108 m/s) or 186,300 miles per second.  With earth orbit satellites about 36,000 kilometers (22,369 miles) above the earth and low-orbit satellites at about 1,200 kilometers (746 miles), times for transmission and reply (RTT) vary greatly.  The high-orbit satellite takes 400 milliseconds for an RTT, while the low-orbit can perform an RTT in 18 milliseconds.  A HAPS base station in the stratosphere reduces RTT to 0.6 milliseconds.

*RTT (Round Trip Time): The time it takes to transmit a signal or data and receive a reply. RTT is affected by distance, the number of relay/transfer devices on the route, and the processing time.

Above the clouds in the stratosphere, HAPS receives all the sunlight possible, enabling it to stay up as endlessly as an operator desires.  Being able to “loiter” at altitude enables long-term transmission.  Its solar panels and ten propellers are able to keep the 78-meter (256-feet) wing cruising at an average 110 kilometers per hour (68.4 mph).

The HAWK30 supports an atmospheric communications platform, “Capable of providing coverage for a radius of about 124 miles while staying aloft continuously for six months, SoftBank said. The longest solar-powered flight with a previous-generation AeroVironment HAPS drone was for 18 hours in 2001.”

HAPSMobile makes the point that, “There are still many countries and regions around the world where the development of the Internet has been delayed due to insufficient power supply, security issues and other barriers. Some of these areas have access to satellite-based Internet, but satellite technologies have their own barriers, such as hardware failures, speed and bandwidth issues, and pricing. With stratosphere-based technology, however, it will be possible to provide high-quality Internet services that are fast, affordable and with high bandwidth across all areas. For that reason, HAPSMobile is strongly committed to this new technology.”

We can hope that the convergence of ground-based, stratospheric, and extra-terrestrial signals will bring the opportunities inherent in the Internet and other communications links to the entire world.