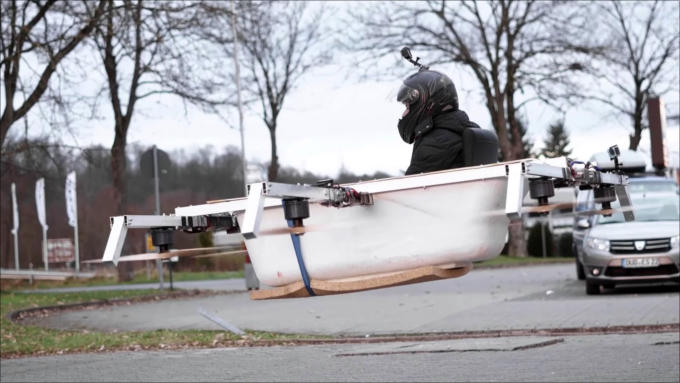 Electric-Flight.eu reports on three Germans who made a bathtub fly – and used it to fetch pastries.  As the website reports, “The Real Life Guys” are two Darmstadt students and one DB train attendant who shook up the media last week . They connected a bathtub with an aluminum scaffolding and six 9.6 [kilowatt] motors (€1 065 or about $1,191[each]) from the model building sector to 42-Volt batteries and blew it up.”  “Blew it up” means lifting it skyward on the power of what look like six Hacker model airplane motors, capable of putting out 15 kilowatts (20.1 hp) each for 15 seconds.  The 9.6 kW (12.9 hp) output cited in the Electric-Flight article seems realistic for sustained output, and the €1,050 price on Hacker’s website seems to confirm that this is the motor used. 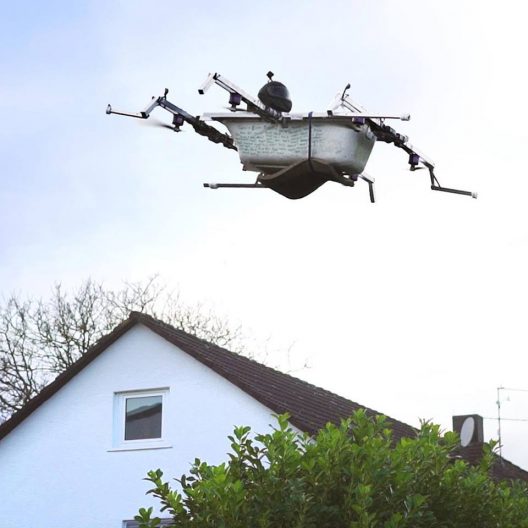 That such a device and the idea of actually hopping in and going for a dry run in the sky is daunting gives proof to one of the Guys’ slogans, “Life begins at the end of your comfort zone.”

After a disastrous first attempt with a quadcopter type of device, the lads partnered with Exabotix, a German drone manufacturer which normally makes multirotors capable of lifting payloads from 0.5 kilograms (1.1 pounds) to 5.0 kilograms (11 pounds).   Their expertise in keeping their camera platforms upright enabled the “Guys” to stabilize a bathtub that, as one friend jibes, will be great in the event of a water landing.

Tub, aluminum framing, six motors, controllers, and batteries raised the price to about €17,000, or $20,845.  Phillip Mickenbecker, one of the students, flies it in a short cross-country hop to visit the local bakery, easily passing over hedges and wetlands.

Exabotix reported, “At their latest idea, however, they reached their limits and needed some help.  After their first attempts with the aircraft were not quite successful, the boys contacted us and asked for support.

“At Exabotix we deal with future technologies, that’s our world.  Therefore, the Real Life Guys, after the integration and programming of our own control, could dare the first flight.  (Your editor guesses some tuning of proportional/integral/derivative control loops was involved.) Our flight hall is designed to test prototypes.  So we were gladly available for this project and also gladly supported the later flight for bread rolls.

We like the courage of the Real Life Guys and have been able to test our own abilities in a cool way. Let’s see how far we can get on!”

Like Peter Sripol with his rapid-fire mind and even quicker videos, the Real Life Guys seem to have boundless energy and great amounts of self-confidence.  At the same time, they know when to call in the professionals for advice.