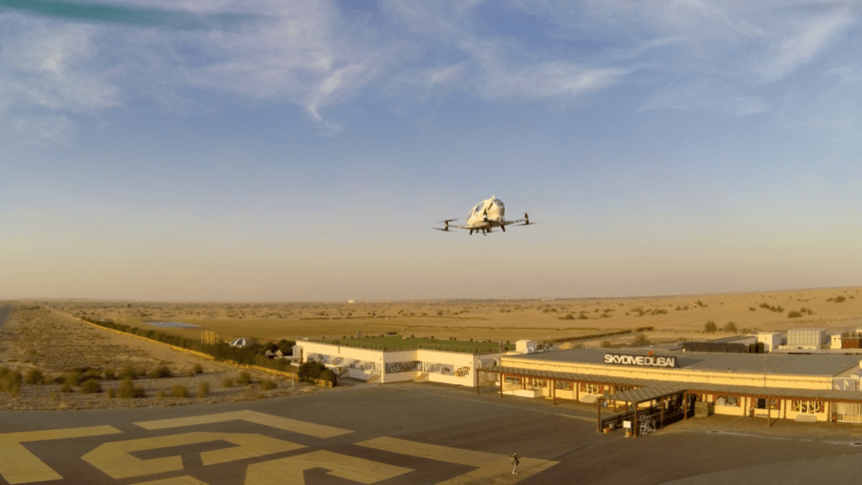 What do you give the country that has everything?  Perhaps the world’s first aerial taxi service.

An Excess of Riches

Dubai is a fabulously rich country, with an air conditioned beach, the world’s largest shopping mall and an indoor ski center complete with a good base and a layer of powder.  Disappointingly, it’s only the third largest indoor skiing area in the world.  The largest is in the Netherlands, with the second largest in Germany.  At least those countries don’t have to overcome the desert’s heat to drop the temperature below freezing.

Visitors to Dubai can be excused for wanting to commute between these tourist attractions in an equally extravagant way.  Buzzing down on them in an eHang 184 passenger-carrying drone will ensure a grand entrance.  An Associated Press report says the Dubai officials are already pushing forward on test flights.

“Mattar al-Tayer, the head of Dubai’s Roads & Transportation Agency (RTA), announced plans to have the craft regularly flying at the World Government Summit. Before his remarks on Monday, most treated the four-legged, eight-propeller craft as just another curiosity at an event that views itself as a desert Davos.

“’This is not only a model,’ al-Tayer said. ‘We have actually experimented with this vehicle flying in Dubai’s skies.’”

Enthusiasm seems high, with publications such as Conde’ Nast Traveler touting the possibility that tourists might hop flights around the Burj Dubai or other popular sites this summer.  Others are less enthusiastic, exhibiting touches of dubiety about Dubai’s aerial adventures.  Futurism.com takes the promise that Dubai will be lofting these pods skyward by July seriously. 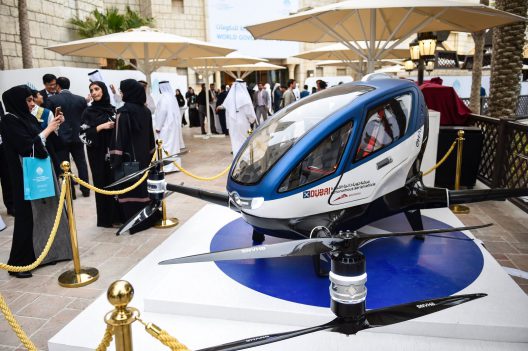 eHang 184 on display in Dubai

Wired showed its skeptical side last year, doubting the eHang 184 would get past the testing stage.  “Wherever there are rich people with somewhere to go and maybe a little bit of a danger streak, EHang will be there. Maybe.”  DroneLife expanded on that skepticism with a late December report noting that although Nevada had granted permission for flight testing in June, no tests have taken place to date.  Ehang co-founder and CMO Derrick Xiong has assured the press that the vehicle seen on display at the Consumer Electronics Show last year was the real deal and not just a stage prop.  This comes despite the loss of 70 workers and apparent financial problems for the Chinese firm.

DroneLife reports, “However, Xiong is reassuring the public that the Ehang 184 has performed over 200 test flights in China, and that the drone has proved its stability and accuracy.  The company continues to develop the drone: improving the propeller, motor, motor driver, and battery.”

With China and Dubai allowing test flights, the Emirate seems to be ready to start passenger service in July.  Engadget reported on the eHang Flight Command Center – or at least the imposing-looking artist’s renditions of the proposed Center.  Engadget adds that the 200 test flights are not enumerated by the number of passenger-carrying flights, or how many were fully autonomous.  In the meantime, the company reports having flown several flights from the Center with the Ghost drone, the small consumer item one might have registered with the FAA. 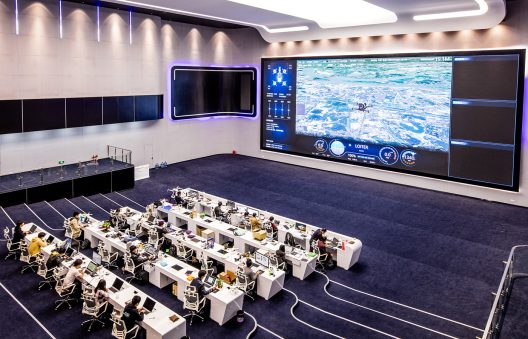 The Center can monitor, “Speeds, altitude, individual propeller power, location, drone camera feed and video feed of the passenger — plus communicate with passengers and schedule air traffic.”  Engadget says they received press photos that show place-holders in place of actual data input on control center screens, indicating not all functions are yet up and running.

The Verge, verging on disbelief, reports the possible use of eHangs to fly pig lungs to human patients.  Their subhead, “A wild vision of the future that should be taken with a grain of salt,” shows an editorial slant Derrick Xiong might not appreciate.  The client, Lung Biotechnology, is a subsidiary of United Therapeutics, a multi-billion dollar biopharmaceutical firm.

The firms’ press announcement explains the approach.  “Lung Biotechnology specializes in manufacturing lungs and other organs for transplant using a variety of technologies, including pig-to-human xenotransplantation, as well as regenerating them from stem cells. It plans to station the MOTH (Manufactured Organ Transport Helicopter) rotorcrafts outside of its organ manufacturing facilities, and use preprogrammed flight plans to hospitals and re-charging pads within the MOTH radius so that the manufactured organs can be delivered within their post-production window of viability.”

With a potential patient base of 200,000 people who would die every year without a lung transplant, the approach could save lives and be highly profitable for those making the organs and the deliveries.  Between shuttling wealthy tourists in Dubai and making timely deliveries to hospitals, eHang certainly has incentive to step up its game.