Volkswagen just bought a five-percent stake in a startup company called QuantumScape, a commercial spinoff of work done at Stanford University’s Nanoscale Prototyping Laboratory for Energy Conversion and Storage.  The Labroratory’s head, Fritz B. Prinz, Finmeccanica Professor of Engineering and Robert Bosch Chairman of Mechanical Engineering, explains: “Our team creates, models, and prototypes nanoscale structures to understand the physics of electrical energy conversion and storage. We are exploring the relation between size, composition, and the kinetics of charge transfer. We are also interested in learning from nature, in particular by studying the electron transport chain in plant cells.”

(Note that the QuantumScape web site is curiously without detail, showing only four pretty pictures and making three or four non-controversial statements.  The most information comes on the Contact link.) 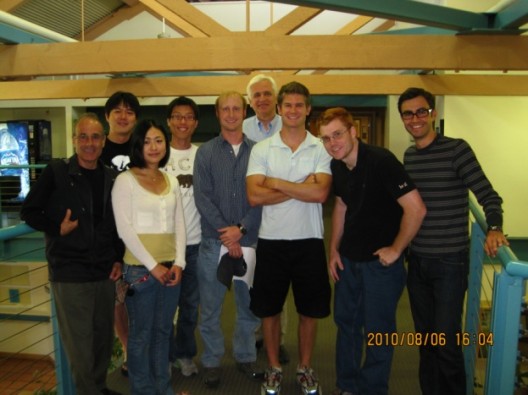 Whatever they are doing, the Lab has caught the interest of not only Volkswagen’s CEO Martin Winterkorn, but produced a flood of often speculative articles from Bloomberg, EV World and other sources, an indication that people in the know seem to think something’s coming.  That something may be what QuantumScape calls, “A fundamental disruption in the field of energy storage.”  This type of provocative statement is a hallmark of Elon Musk, CEO of Tesla, and hearing similar ideas from other sources might be a prelude to a more serious contest.

This disruptive element may refer to the “All-Electron Battery” developed by the Lab.  The Lab’s description of the battery is also provocative, and despite its scholarly tone makes pretty impressive claims.  “The All-Electron Battery stores energy by moving electrons, rather than ions, and uses electron/hole redox instead of capacitive polarization of a double-layer. This technology uses a novel architecture that has potential for very high energy density because it decouples the two functions of capacitors: charge separation and breakdown strength. If successful, this project will develop a completely new paradigm in energy storage for electrified vehicles that could revolutionize the electric vehicle industry and establish U.S. leadership in advanced energy storage technology for electric vehicles.” 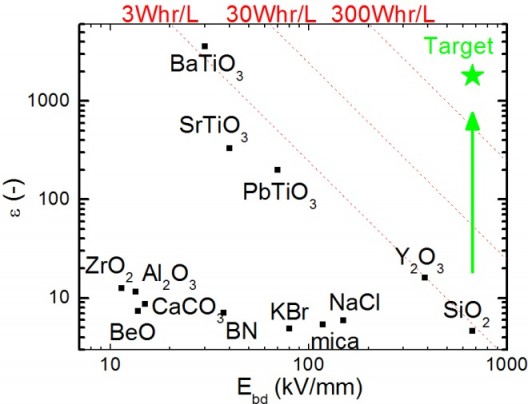 The promise of the green arrow to the right shows why VW would be enthusiastic about this development, with both Watt-hours per kilogram and Watt-hours per liter topping anything currently available

VW would be a formidable competitor for Tesla, spending over $13 billion a year on research and development to Tesla’s $250 million through the first nine months of 2014.

Ecomento.com reports VW’s Wintercorn as telling a Stanford audience in November, “I see great potential in this new technology, possibly boosting the range to as much as 700 kilometers (430 miles).” He went on to say. “Electro-chemistry is a field of the greatest importance internationally and across industries…..[and is]…..a field where we can and must achieve progress.”

Green Car Congress breaks the history and technology down a bit more.

“In 2010 (also the year QuantumScape was founded), ARPA-E awarded Stanford, with Honda and Applied Materials as project partners, $1,498,681 for a two-year project to further the AEB.

“In patents awarded to Stanford, the Stanford researchers explained that the improved energy storage is provided by exploiting two physical effects in combination.”

One patent describes the all-electron battery as a capacitor with embedded inclusions in the dielectric structure between two electrodes.  “Electrons can tunnel through the dielectric between the electrodes and the inclusions, thereby increasing the charge storage density relative to a conventional capacitor.”

By carefully nano-structuring one or both electrodes, the researchers found ways “to provide an enhanced interface area relative to the electrode geometrical area.”  Such “area enhancement” can also reduce the self-discharge rate of the battery.

The patent explains that “charge and discharge rates and storage capacities of the devices can be selected by appropriate geometrical design and material choice.”  Changing internal geometry allows a wide variety of battery characteristics.

Green Car Congress takes a tentative approach to potential developments.  “If Volkswagen has invested in QuantumScape (and if QuantumScape is basing its technology on the Stanford AEB), then we may see relatively soon what types of design and optimization decisions the startup has made on top of the basic technology with an eye toward vehicle applications.”

In any case, VW and Audi have set goals of leading in battery-powered and other alternative energy vehicles.  The company’s size and willingness to spend on R&D could lead to some exciting developments.