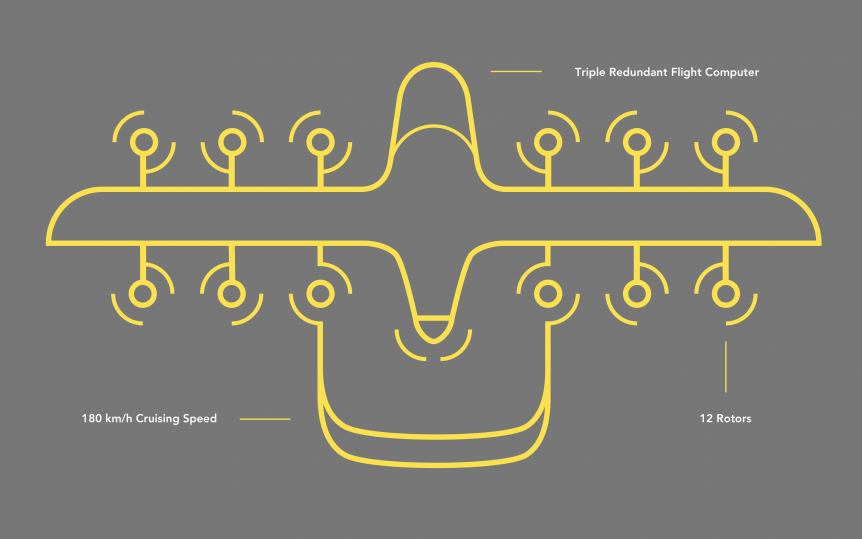 Recently renamed Wisk (formerly KittyHawk) has resumed flight testing of its Cora eVTOL (electric Vertical Take Off and Landing) machines following a cautionary corona virus shutdown.  It’s already got a fleet, with several prototypes in the U. S. and at least four in New Zealand. 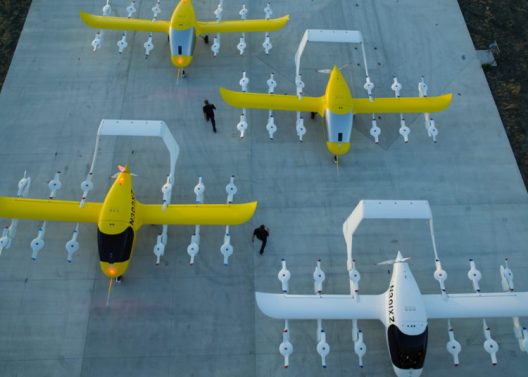 Four Cora’s on the ramp

New Zealand seems to have a lock on flight testing for unpiloted aircraft, with Pyka and Cora both finding amenable administrators willing to allow flight tests.  Boeing and Wisk are collaborating on achieving urban air mobility with the two-seat machine, and getting a lot of positive vibes from the locals.  Partly from the NZ government, partly from local businesses, and partly from indigenous Maori tribes’ people, Wisk and Cora have found wide-spread acceptance down under.

Research, Science and Innovation Minister Megan Woods announced last October that, “The Government is establishing an Airspace Integration Trials Program to support the safe testing and development of advanced unmanned aircraft and accelerate their integration into the aviation system.”

The Ministry of Business, Innovation and Employment (MBIE), “Is committed to supporting the growth of an innovative unmanned aircraft sector in New Zealand. We’re creating opportunities to test and develop these emerging technologies to help make this happen.”

Working Zephyr Airworks, the New Zealand affiliate of Wisk, the MBIE has transferred $2.1 million to the Civil Aviation Authority to “build capability” and hire technical experts.  The Ministry gave an additional $900,000 to the Ministry of Transport to “support policy development related to regulatory settings.”

The government will also partially reimburse 4,000 aircraft owners for the costs of installing ADS-B (Automatic dependent surveillance–broadcast) transponders in their airplanes.  Such units will become essential as the number of autonomous craft grows.

Wisk reports (as of October, 2018), “Our time in New Zealand has also empowered many other important milestones. We have achieved seven hundred flight tests globally (now well over 1,000)–– a major step forward toward ensuring Cora is one of the most reliable and advanced aircraft ever to take to the sky.

“We have built lasting bonds with the community. The young leaders of Ngai Tahu Iwi (a Maori tribe in New Zealand’s South Island) recently visited our headquarters in sunny California. And we have benefited from hiring incredible local talent as the Kiwi cohort on the Cora team grows. 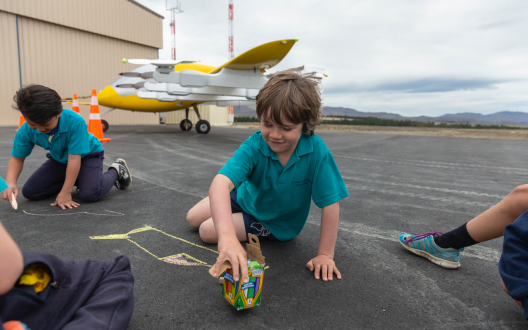 Kids, chalk, and Cora – a great outing for the family

Recently, we also celebrated the opening of our hangar in New Zealand. It was an exciting moment. The hangar will serve as our first base of operations as we grow our fleet of Coras and build toward the world’s first electric, autonomous air taxi service.”

In a hangar opening ceremony attended by Minister Woods, local school children, and Maori tribes people, “We were privileged enough to have Ngai Tahu bless our hangar. They led us on a procession in a timeless ceremony for invoking wellbeing and prosperity. It was one of the many priceless opportunities we have had to engage with the rich tikanga of the Māori culture… Together, we are building a world where the freedom and power of the sky connects all our lives.”

An outcome of a decade’s development, Cora takes off vertically with no less than 12 propellers, apparently on pivoting mounts, paired on six under-wing booms.  Wisk describes the safety factor inherent in the design: “Rotor Safety System: Our vertical lift system features 12 independent rotors. Each direct drive motor combination has only one moving part: the fan. Flight tests have shown that an issue with one rotor is automatically handled with no discernible change in the flight path.”

Autoblog has a somewhat unique take on the “flying taxi.”  The Kittyhawk offerings are no longer available.

To keep things on a planned course, triply redundant flight controllers process navigation.  If any one encounters a problem, the other two maintain the plan.

Finally, in the Hail Mary type of safety measure all UAMs seem to choose, a total failure of all power plants on Cora would enable use of a ballistic parachute that would lower Cora and its occupants safely to the ground.  Your editor has a nit to pick with this, even though most UAM makers extol its virtues. It may be great for the craft and its passengers, but what about the unsuspecting groundlings who may have even the lightest of craft land on them – however slowly?

Cora has one saving grace in this, with its aerodynamics enabling controlled forward flight even with all power off.  A pilot (or an autoland system) could still maneuver Cora to a relatively safe landing.

Wisk lists Cora’s range at, “Initially about 25 miles (40 kilometers) plus reserves.  This is less than eVTOL News’ endurance listing of a flight time of 19 minutes with a 10-minute reserve.  At 110 mph cruising speed, 19 minutes would take the craft 34.8 miles (not counting power required to gain cruising altitude and set back down).  Let’s guess that cruising on the one pusher motor takes much less power than that required for vertical lift.  Just for fun, let’s add two minutes of total power lift and two minutes of total power descent.  (All these assumptions and calculations are open to scrutiny, of course.)

Four minutes of full power and 25 miles of 70-percent power would require 16 kilowatt hours for lift and descent and about one kilowatt-hour per minute in level flight or 29 kWh (with reserve).  16 + 29 = 45 kWh for the 19-minute flight.   We’re basing the power required for level flight on that for a Cessna 152, a roughly equivalent but radically different craft.   To lift the 400-pound payload, aircraft structure and motors, and batteries keeps the range short, and the total weight probably close to that of a 152 – 1,670 pounds. 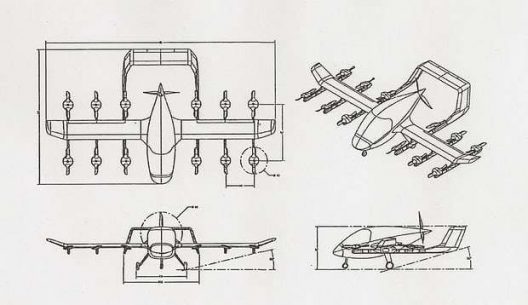 George Bye of Bye Aerospace has what are probably the highest power battery packs (as of now) on his eFlyer aircraft.  They are rated at 260 Watt-hours per kilogram.  If equally efficient packs were installed in Cora, it would take 981 pounds of batteries to maintain 29 minutes of full-power lift.  This would be inconceivable – if not impractical.

For the 19-minute flight noted above, batteries to obtain the 45 kWh would weigh around 173 kilograms, or 380 pounds.  That’s close to the one-third total weight that would make this a viable flying machine.

Wisk is doing a great job in promoting its aircraft, involving talent in both hemispheres, and being a good corporate citizen.  Its examples now flying are showing their merit and we may see the skies filled with their machines sooner than later.