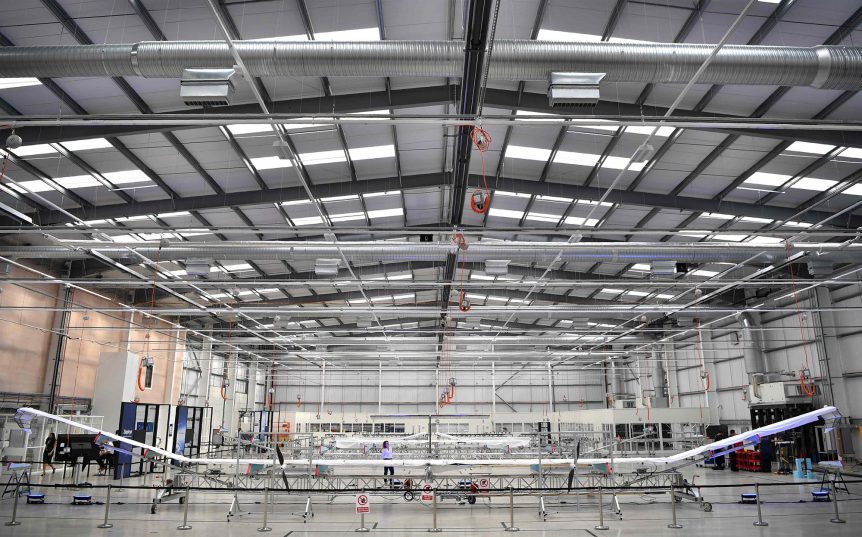 The Royal Aeronautical Society, official record keeper for such things, announced in an August 8 press release, “Taking off from Arizona, US on 11 July, Airbus Defense’s solar-powered UAV (unpiloted aerial vehicle), the British-built Zephyr S, has smashed the existing endurance record for unrefueled, unmanned flight by staying aloft for 25 days, 23 hours and 57 minutes. This, the maiden flight of the production Zephyr S HAPS (high altitude pseudo satellite) for the UK MoD (United Kingdom Ministry of Defense), once verified, almost doubles the existing endurance flight record of 14 days, 22 minutes for UAVs, set by a previous Zephyr prototype in 2010. The solar-powered Zephyr UAV, which weighs less than 75 [kilograms – 165 pounds], flies at 70,000ft, above air traffic and weather, to provide a new class of platform for persistent surveillance, observation, communications relay or connectivity for military or commercial customers. Airbus said that the maiden flight saw test objectives met with further flights planned in the second half of 2018.”

Airbus reports, “Zephyr is a High Altitude Pseudo-Satellite (HAPS) UAS/UAV which runs on solar power. This unmanned aircraft provides local satellite-like services. It endures like a satellite, focuses like an aircraft and is cheaper than either of them.”

The previous longest flight duration record was also logged by a Zephyr prototype aircraft at over 14 days in 2010, ten times longer than any other aircraft in the world at that time.  The record flights were made with Sion Power lithium-sulfur batteries. 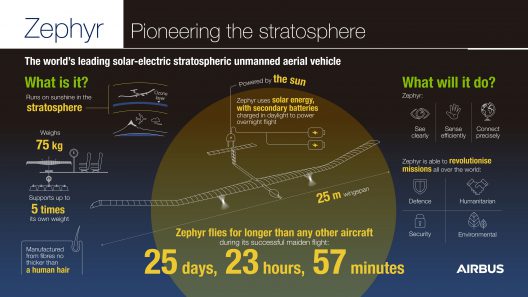 Craig Wilson, Managing Director of Williams Advanced Engineering said: “Airbus is a name synonymous with innovation and technology in the industry. As such, we are delighted to be working with them on this project, and hope to share some of our expertise in electrification, battery systems and advanced lightweight materials, as well as learn from their vast experience in aerospace. We are very much looking forward to working together on this project and hope the learnings from one another may continue in the future.”

Built one-at-a-time for the first three units, Zephyr’s success has prompted Airbus to create a construction facility at Farnborough in England and an operations site in Australia, where the Outback will doubtless beckon new long-distance, high-endurance records.

Jana Rosenmann, Head of Unmanned Aerial Systems at Airbus. Follows up on the new record. “This very successful maiden flight represents a new significant milestone in the Zephyr program, adding a new stratospheric flight endurance record which we hope will be formalized very shortly. We will in the coming days check all engineering data and outputs and start the preparation of additional flights planned for the second half of this year from our new operating site at the Wyndham airfield in Western Australia.”

Zephyr UAVs provide “local (as opposed to satellite worldviews) persistence at an affordable price with a re-usable solar-powered aircraft.” Limiting its surveillance to areas hundreds of miles wide, Zephyrs will enable high-resolution visual observation over extended periods.  As Airbus notes, the only civil aircraft that flew at Zephyr’s altitude were the Concorde and NASA’s U2s.  The military had the SR-71 Blackbird.  None of these had the duration to allow day and night observations. 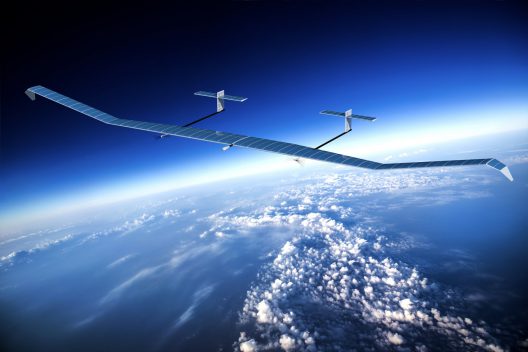 Airbus has two variants of the Zephyr, designed to accommodate a variety of payloads.

The production model Zephyr S is able to carry see, sense and connect payloads.  In development now, the larger, two-tailed Zephyr T spans 33 meters (108.27 feet).  It weighs 140 kilograms (308 pounds) and can carry a 20 kilogram (44 pound) payload with an even greater range of capabilities.

An interview with Steve Whitby, head of Business Development and Sales explains the current state of Zephyr, its strengths, and the future including that for the larger Zephyr T.  He notes that working with Williams Engineering and its expertise in structures and batteries will enable flights of 30 days with available batteries, and up to 120 days with newer batteries and no changes to the structure.

He foresees building up to 60 Zephyrs in the next year, indicating a growing demand.