Robert Adam writes to let the CAFE Foundation know that the 2015 Green Speed Cup is underway, just now finishing its second of three days of competition.  Think of a Green Flight Challenge with a need for green speed balanced against a need for economical use of energy.  Taking place out of Strausberg Airport in Germany, the event consists of three days of tasks which always bring the competitors back home ever day.

“Every task comes with a minimum energy consumption. It will be derived from the energy used by a reference airplane on 10% of the tasks length at MCP. Combustion and electric aircraft use different reference airplanes. Class definitions All aircraft capable of taking off under own power, are allowed in the following classes: 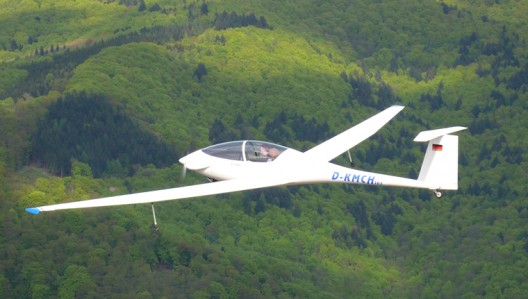 Darmstadt Akaflieg D39b leads the pack so far. Think of it as a cleaner version of Carat or RF-4

The usual list of competitors includes a lot of Stemme products, that group being a founder and major supporter of the contest.  Robert tells us this year is unique.  “We have a quite interesting and completely different field compared to the last years. It looks like a race of the Taifun vs. Scheibe Falke ;). Also on board we have a 2 stroke Piccolo (placed third yesterday on a 240 nautical mile – 276 statute miles task), an RF5, D39 (Akafalieg Darmstadt Protoype) and of course, a Stemme S10 and S6.  Today an Aquila will join the field as the 12th competitor.” 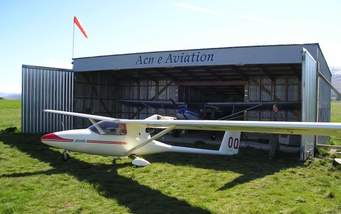 Piccolo is ultralight sailplane based on a design by the late Swiss sailplane builder, Albert Neukom, best known for his Elfe series

The Piccolo is a single-seat, tricycle-geared motorglider designed by Neukom and built in Switzerland.  It is motivated by a two-stroke engine, usually a Solo.  The Aquila is a relatively new Light Sport Aircraft (ULM in Europe) with a Rotax engine and longer than usual wings (33 feet).

Day One saw two outlandings, the first in this event.  “The 240Nm task was a little over the top for the Scheibe B-Falke with only 30 liters of fuel capacity. The team tried to extend their range by using thermals and actually did it suceesfully. However they had to land on an airfield some 10 minutes before the finish line. They even walked to a gas station as the field had no fuel and borrowed a leaking gas can to refuel for the last 15Nm. Our rules allow landings in between, as a Penalty the time counter will continue running until they arrive back at the finish line. Another C-Falke did a less spectacular refueling stop halfway in the race to ensure a safe landing.”

We’ll look forward to the third day’s results and learning more about how the little two-stroke Piccolo has managed to maintain a solid third-place standing so far.  It reinforces the need to design clean, light airframes for best performance and economy.  Fuel use for the leaders is great so far and we’ll report tomorrow on the ultimate outcomes.  It’s too bad there are no electric aircraft in the event this year, but there are several, such as the D-39 and Piccolo that would do well with the right batteries.