Electric motorcycles are a recent addition to a historic race on a tiny island neatly centered in the Irish Sea between Scotland, Northern Ireland, the United Kingdom and Wales.  Its 75,000 inhabitants cluster in villages that look like movie sets of rustic, pre-war England.

Bonus fact: Maurice, Robin and Barry Gibb (the Bee Gees) were all born on the Isle of Man.

Having so few people to share the 688 miles of roads could make speeding a huge temptation.  The two-lane roads are twisty and narrow, though, and even without an official speed limit on many thoroughfares, speeds rarely average over 50 mph.  Drivers are limited to that speed for the first two years after they get their license, and it’s the qualifying minimum speed for motorcyclists wanting to compete in the annual race.  That means a run around the Snaefell Mountain course (37.73 miles) in 45 minutes. 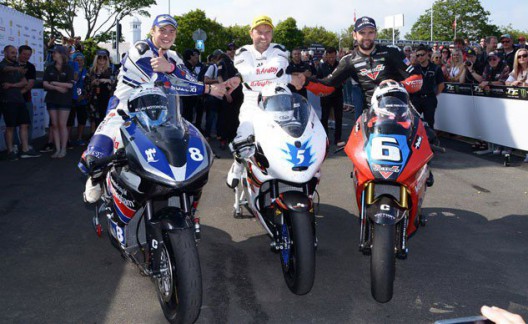 Anstey, McGuinness and Dunlop enjoy the moment of victory

The original rules for the 2010 TT (Tourist Trophy) Zero race included this line: “The technical concept is for motorcycles (two wheeled) to be powered without the use of carbon based fuels and have zero toxic/noxious emissions.”  In the seven races, no fossil fuels have stained a pit in the TT Zero, and the bikes are approaching records held by fire-breathing super bikes.  One big difference: petrol-powered motorcycles take six laps around the course.  Battery development limits the electrics to one lap. 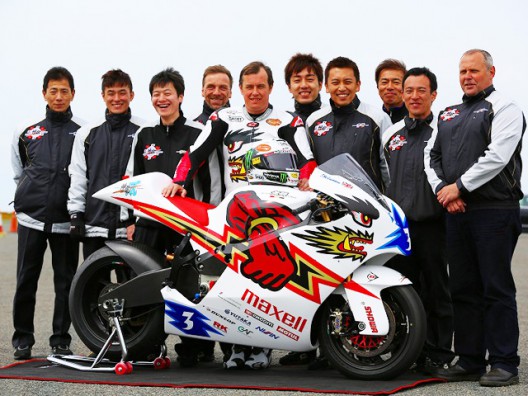 Still, the first four TT Zeros were won by Motoczysz, a team lead by Michael Czysz that broke the ton (a 100-mph lap) in their second outing.  Since then, the 2015 time of 18′ 58.743 (119.279 mph) has been the fastest green run around the island, with this year’s winner taking about seven seconds longer.  Mugen has won the last three races.

The video is from last year, when John McGuinness set a record for the fastest electric lap so far.  The best electric bike speeds are now within 15 mph of the record-holding superbikes, and catching up quickly.  Future races may not segregate these classes, and better batteries may give true parity in the sense that TT Zero machines will go the full distance alongside (and maybe beating) their internal-combustion cousins.