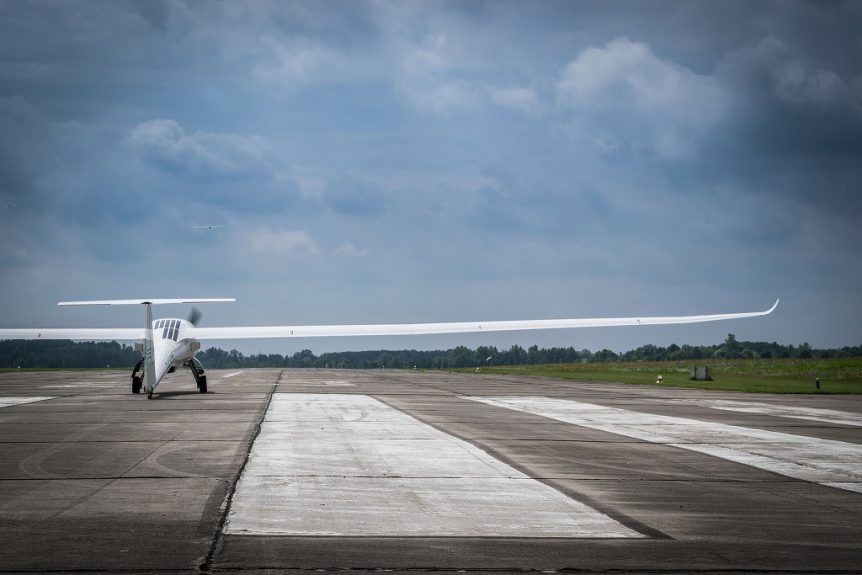 The Green Speed Cup, held every year except for 2016 since 2011, is measure of an airplane’s efficiency, using a formula from the competition’s web site.  “The scoring will be very simple. The aircraft that flew with the best ratio of fuel-consumption per distance and speed will win the competition. The scoring of each competitor will be related to the winner. The winner gets 1000 points for one day.”

According to Robert Adam, one of the organizers of the Cup, “We had a fantastic Green Speed Cup (and rightfully but reasonably prods your editor for not covering the results sooner.)  Luka Znidarsic from LZ Design won with his “front electric sustainer” Ventus glider. He had to close the gap between battery range and the given task range, but he managed with great success.  In our overall statistics of the last 6 cups, he put the e-Genius quite far behind him.” 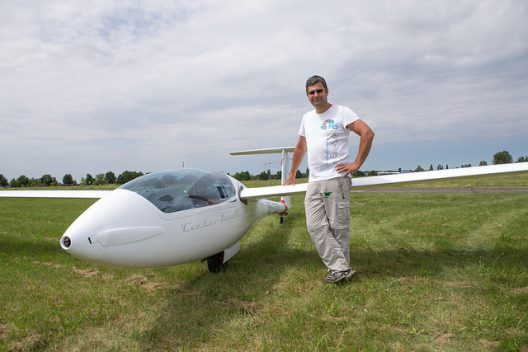 Winning against e-Genius is a formidable accomplishment, since that and Pipistrel’s HY-4 (formerly G4) are acknowledged Green Flight Challenge winners, and both have gone on to stretch the boundaries of economic performance since their 2011 wins.

He marvels at the FES system.  “That little folding propeller system is just fantastic, revolutionary.  With the electric motor, you can within seconds just add a little power to the aircraft and be a glider again seconds later. It apparently enable[s use of] much more energy of the atmosphere in combination with an efficient propulsion, which must finally result in the statistics above.”

Green Speed Cup rules allow soaring when possible to achieve greater “fuel” economy.  A high-performance sailplane such as Ventus can take advantage of that, and use its small motor to speed between thermals or other lift sources. 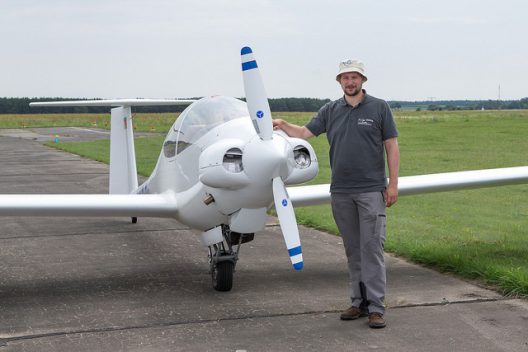 The winning combustion class entry saw Holger Massow from the Akaflieg Darmstadt defend his championship from the last cup (2015) in the school’s D-39, a low-wing motorglider.  A Stemme S12 crew, flying for the first time in the event, “improved a lot throughout the competition.”

Scoring showed each craft’s performance relative to a Prius, the common measure of efficiency these days, saw the winning Ventus as 26 times more fuel efficient than the Prius.  Even though hobbled by technical issues, the e-Genius outdid the reference Prius by 6.28 times.  Since it’s a two-seat airplane, it might have counted as being 12.56 times more efficient by Green Flight Challenge rules.  All competitors averaged 2.55 times the fuel efficiency of a Prius, most making better speed in the process. 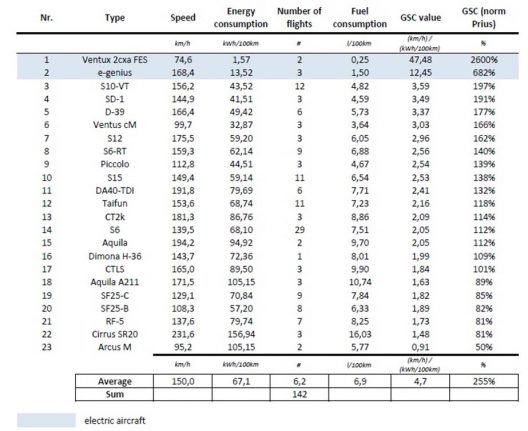 Total scores for all competitors in the 2017 Green Speed Cup.  See the Green Speed Cup’s web site for details about scoring and the theories that help achieve high scores

It would have been exciting to see more electric craft competing.  Robert reports, “Unfortunately we’ve lost some quite interesting competitors, most of them due to technical issues / permits. Greenelis was unable to compete, the e-Genius had a genset failure some 70 percent down the way to the competition and returned home on batteries on a two-day trip. The Risen ultralight was unable [to compete] due to paperwork.

“We are motivated to see all of them, and even more electric aircraft in the upcoming Cup 2018.  There is time for many potential entrants to get motivated.  The seventh Green Speed Cup will be held June 8th through 10th, 2018 in Strausberg, just east of Berlin.

See all photos from this year’s event here, and pictures from all Cups here.