The 24 Hours of LeMans is the quintessential motorsports event every year, pitting the top automobile racing teams in the world against the endurance trial of completing a full day’s run at “full chat,” as the British used to say, overcoming weather, wear and tear, and competing drivers. 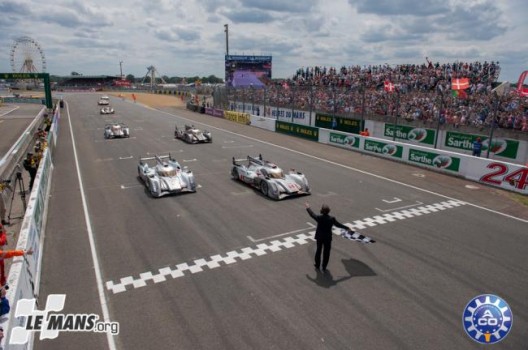 Traditionally populated with internal-combustion gasoline engine powered racers in many sizes and classifications, the race has seen inroads with turbo-diesels, hybrids, and hints there may be soon full electric competitors.  The most advanced class this year comprised a collection of formerly exotic technologies, with a variety of approaches to going fast.

The race’s official web site explains, “The LM P1 class (Le Mans Prototype 1) welcomes machines at the leading edge of progress. All ideas are welcome: front or rear engines, petrol or diesel, turbocharged or atmospheric … But the big trend right now is the emergence of systems for kinetic energy recovery (KERS). Storage batteries or flywheel, returns energy to front or rear wheels.

“To be considered as a hybrid, an LM P1 must be able to move the entire length of pit lane at 60 km/h (about 37 mph) using only its KERS. When the car is running on the circuit, the amount of energy delivered between two braking zones should not be greater than 500 kilojoules (approximately 100 horsepower for 6 seconds).”

Of the 22 cars in this class, four were hybrids – two from Audi and two from Toyota.  Many others included KERS in their power systems.

The LMP2 class is for lighter, lower-powered cars, with “Characteristics similar to LM P1 (carbon fibre monocoque chassis) while adhering to strict cost criteria: chassis price capped at €355,000; engine price capped at €75,000. In 2012, six chassis and three engines are available, so in theory, eighteen different combination possibilities!”  LMP2 also allows drivers without the world-class standing of the top competitors an entry level into more professional levels of the sport.

Oddly, the LMP1 cars have smaller engines, 2 liters for turbocharged units and 3.4 liters for atmospherically charged powerplants.  Car must weigh at least 900 kilograms.    LMP2 cars can have a normally aspirated V-8 of 5 liters or a turbocharged six-cylinder engine of 3.2 liters.  The price restrictions (LMP1 cars can have unlimited budgets) keeps speeds at a lower level.  The traditional saying in motor racing holds true, “Speed costs money.  How fast do you want to go?”

The GTE Pro category allows production model sports cars to compete.  “Production” means that at least 100 examples of the car must have been built in the last year.  Professional drivers take the helm and the cars are often entered by the manufacturers.  A GTE Am category allows “amateur” drivers to race production cars that must be at least one year old, relegating them to a gentlemanly drive around the course, although some of the amateurs have included serious racers such as Paul Newman, Steve McQueen and Steve Fossett. 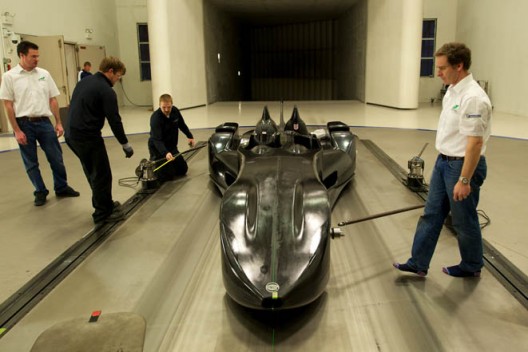 A final addition this year allowed Nissan, in exhibition class Garage 56, to race its 1.6 liter, four-cylinder Delta Wing, only 1,300 pounds and with a Batmobile look that comes from its narrowly-placed front wheels and wedge shape that purportedly helps offset its low power.  Despite its 300 horsepower it ran well, then had transmission trouble and was running toward the end of the pack when it was bumped off the course by one of the Toyota hybrids.

Following a strong start, with third and fourth places in hand after the first hour,  both Toyotas retired during the race, one after a spectacular airborne departure from the track.  The driver was not so lucky in this case, suffering a back injury, but surviving nonetheless.

Yoshiaki Kinoshita, Team President was quoted as saying, “This is a consistent and satisfying start for us. The crew performed well in their first competitive pit stops and it was very satisfying to see the TS030 HYBRIDs pulling away under electric power in a race for the first time.”

Audi, as in previous years, had a winning strategy, with all three LMP1 winners coming from that stable.  No.1 Audi R18 e-tron quattro of Andre Lotterer-Marcel Fassler-Benoit Treluyer took first place, a first for a hybrid vehicle.  The Number 2 Audi took second place (also a hybrid) and the more traditional diesel-powered Audi R-18 Ultra came in third.  Both Audi leaders had a turbo-diesel hybrid system with a flywheel-based KERS.  The first place winner had all-wheel drive as an added traction booster.

With major automakers making strides in alternative powerplants, we can anticipate much of this technology being applied to future aircraft.