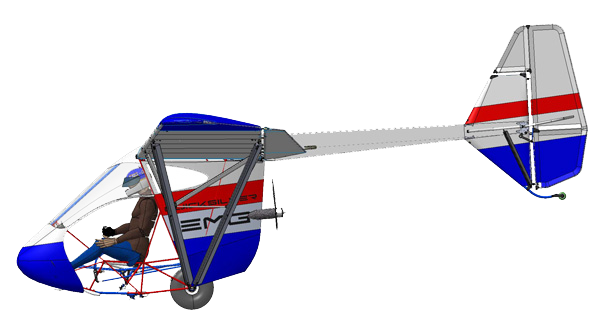 One of the big surprises in last month’s webinar hosted by the EAA and presented by Brian Carpenter of Rainbow Aviation Services/Adventure Aviation was the 24-Volt motor being developed for the EMG-6 ultralight motorglider. 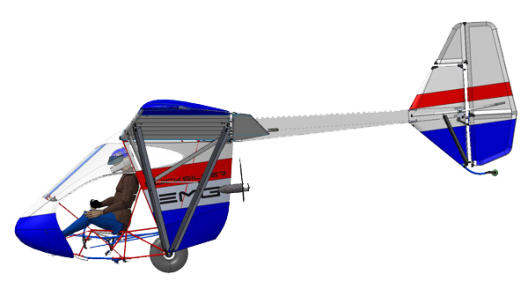 EMG-6 side view with motor – still within Part 103 limitations, according to Brian Carpenter

Many, if not most of the electric motors flying on existing craft are higher voltage units.  For sake of an off-handed definition, we’ll divide low and high at below and above 50 Volts, something OSHA delineates in its regulation 29 CFR 1910.303(g)(2)(i), which “generally requires “’live parts of electric equipment operating at 50 volts or more’ to be ‘guarded against accidental contact by use of approved cabinets or other forms of approved enclosures’ or by other specified means.”  In its explanation, the Occupational Safety and Health Administration “considers all voltages of 50 volts or above to be hazardous. Electric current, not voltage, passing through the human body causes injury….”

And it really doesn’t take much amperage to take a person to the next realm.  Electric chairs, for instance, pass voltages from 500 to 20,000 Volts through the condemned’s body, but at currents of only five to 20 Amperes.  Shockingly, “A current of 0.070 ampere causes heart problems and may be fatal.”  The lesson is that all electric devices need to be treated with caution and respect.

While high power in aircraft electric motors comes from a combination of high voltages and high amperages (multiply the two to get the kilowatt output of the motor), Roman Susnik and EMRAX provide three voltage levels with correspondingly varied amperages to suit motors to different applications.

The Emrax 228, for instance, can be ordered in high, medium and low voltage configurations.  The high-voltage version can handle up to 600 Volts at a maximum current of 240 Amps.  The low-voltage model can run on 24 to 150 Volts, but at 900 maximum Amps.  Because the resulting torque is so great from especially the low-voltage motors, they can swing large propellers at low RPMs while providing significant thrust.  Certainly the early demonstration of low-speed torque shows low noise and an undocumented level of thrust at 450 RPM.  Most Emrax motors don’t exceed 2,200 RPM at full power.

This 48-Volt car ran 14 hours on a very level, smooth floor and still had 78-percent of the energy stored in its two 159-liter (84 gallons) tanks available, according to the company.  This demonstration, while impressive, is somewhat like Sanyo’s battery-powered six-year-old, 1,000 kilometer run without a recharge.  Run at 25 mph, Sanyo’s record was not a big challenge for even the draggiest vehicle.  It’s unlikely the Quantino went much faster, considering the confined quarters.

Salt water weighs about 8.5 pounds per gallon, so the Quantino is lugging around 714 pounds of motive power.  It has the same issue that batteries have, not diminishing in weight as the energy burns off.  Any car or airplane using either energy storage medium ends its journey as heavy as when it started.

48-Volt systems are becoming common in so-called “mild” hybrids with stop-start capabilities, but coming into their own as full-time powerplants for electric vehicles.  Beyond that NanoFlowCell warns of the “spectre” high-voltage dangers.

Brian Carpenter has tried several electric motors on his EMG-6 motorglider, and is planning the first runs for the R&D motor developed in collaboration with that company.  The 24-Volt motor would turn a big propeller slowly, just as the Polini two-stroke also tested on the airplane manages.  A large, slow propeller is great for quick climbs to gliding altitude, and a battery pack can then be used intermittently to search for thermals or assure a return to the field. 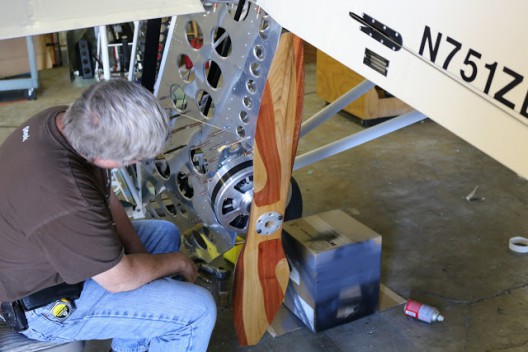 Brian Carpenter mounting R&D motor on EMG-6.  Large wood propeller may be one alternative, since Carpenter is also testing a three-blade unit from Sterna with thinner cross-section.

Collaborating with Ed Donovan at R&D Cable, Brian describes the prototype motor as a good alternative to two-strokes, even borrowing small parts from them.  “The bolt pattern is the standard two-stroke Rotax engine bolt pattern. the bearing is the same as the front bearing on the Rotax E gearbox. The total motor weight will be in the neighborhood of 25 pounds when completed. There are 6 mounting locations on the rear of the motor housing. During testing at full power the outer housing gets slightly warm but the windings and the magnets remain cool even at full power operation. They are still undergoing some operational tests on the motor and perfecting the final design before going into the mass production phase and developing the tooling for the stamping dies for the winding core. The expectations are that the efficiency of the motor will exceed 95%. And reliability and durability are key components in the development of the motor. I would expect that this motor will have a TBO in excess of 10,000 hours. And overhaul cost will be the replacement of 2 bearings. We have been told that we should expect to have an operational motor available for installation before we depart for the Oshkosh airshow.”

If the high-torque ability to swing a propeller slowly in a high-thrust way turns out to combine the (relative) safety of low voltage with the ability to scramble for altitude, this may move more designers to opt for the low-voltage option.