Anne Lavrand, founder and head of Electravia in Sisteron, France, emailed to tell of her latest creation before packing up to attend the Basse-Ham, France powered paraglider meet and airshow, the Mondial de Paramoteurs.  She wrote, “I hope this new realization will have some success there!” 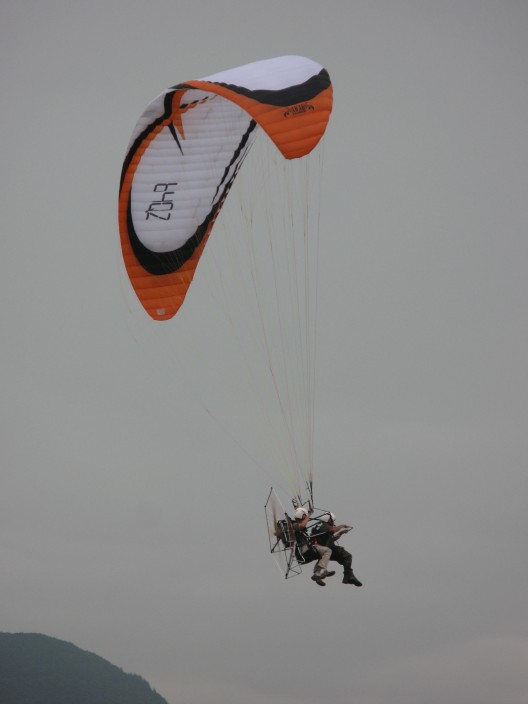 She announced “first flights of the E-SPIDER, the first 2-seater electric powered paraglider in the world.”  The 32nd aircraft flown with her power system attached, it reflects what this hard-working woman has been able to accomplish since 2007, with customers in Europe, Australia, Brazil, China, Taiwan, the USA and Canada.  It joins an array of single and twin motor ultralight aircraft, motorgliders, trikes, hang gliders, and paramotors electrified by Electravia.  Anne’s team has even crafted a 2/3 scale LeMans racer that was part of this year’s opening ceremonies at the famed track.

E-Spider uses a Flytec HP-13.5 brushless motor, different from the brushed-type Lynch motors used on most of Electravia’s aircraft.  The little pancake-like unit puts out 79 kilograms (174 pounds) of thrust, and can run on its 3.9 kilowatt-hour Kokam battery pack for one hour solo or 40 minutes hauling two into the air.  The pack weighs 23.8 kilograms (52.4 pounds), constituting the majority of the power system’s weight of 42 kg (92.4 pounds), including motor, controller and aluminum hexagonal cage.  Flytec’s powerhouse weights a mere 4.7 kg (10.34 pounds) and its controller adds only 0.8 kg (1.76 pounds) to the total.

Electravia’s unique 1.5 meter (4.9 feet) QD2 concept propeller is claimed to cut noise because of the irregular placement of its four blades.  The video explains the theory and demonstrates results of this innovative thinking.

Electravia uses its organic light emitting diode (OLED) e-Screen to monitor motor and battery functions.   The screen is visible even in bright sunlight.

We eagerly await Anne’s and Electravia’s next promised creation, the KiloWatt, a two-seat electric motorglider along the lines of Electrolight 2, their Fauconnet sailplane with a Lynch motor in its nose.