100 years ago, the idea of flying an 800-mile cross-country anywhere was a grand and dangerous adventure.  With aerodynamics not yet a science and aircraft powered by the self-destructive engines of that day, it took a brave pilot to even make the attempt.  The Paris-Madrid race of 1911 was a disaster from the start, and yet one man managed to achieve triumph despite the tragedy. 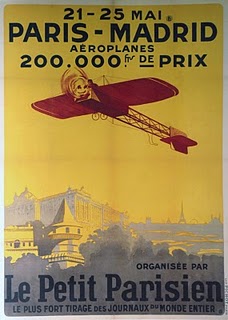 According to Transpress, a New Zealand blog, “After a full year of airshows, advertisers had become bored with seeing flying machines going in circles on a racetrack: they wanted city to city races, as was happening with automobiles. Funded and supported by the newspaper Le Petit Parisien, the international aviation race Paris-Madrid, despite the risks, attracted twenty-one competitors. The announcement of a 200,000 francs prize on the poster was actually the total prize pool: the first three airmen sharing 50,000 francs, the rest going to the teams.

“The race included three lengthy stages: Issy-les-Moulineaux to Angoulême (Charente), on 21 May, starting at daybreak, 400 kilometers that competitors should be able to cover in seven hours; Angoulême-San Sebastian (Spain) on 23 May, starting at daybreak, a stage of 335 km designed to circumvent the Pyrénées mountains in a six-hour flight; and San Sebastian-Madrid, on 25 May, starting 6 am, a long stage of 620 km and a real challenge, it traversed a pass that the best had to travel over in less than eleven hours. In all a total estimated 24 hours of actual flight for the whole race. “

“The race began with tragedy. The airplanes were overloaded with fuel.  The French War Minister, Maurice Berteaux, only in office since 2 March 1911, had come to Issy-les-Moulineaux to salute the French pilots’ performance. He was struck by the airplane that Emile Train, weighed down by a passenger, Marc Bonnier, was struggling to lift off the ground. The Minister of War was killed instantly. The
Interior Minister, Monis, Deutsch de la Meurthe and several other people including a child were seriously injured. The crowd broke through the barrier and flooded onto the field. Marshalls charged from sides to try to contain it.

“The race was stopped: only six pilots had been able to start before the abandonment of the race.”

“Only Jules Védrines finished. He covered the 1,360 km between Paris and Madrid in fifteen hours of flight at an average speed of 80 km/h. His monoplane, which peaked at 125 kilometers per hour, was only powered by a 50 horsepower Gnome Omega engine.”

Craig Peyton flew this year’s Paris-Madrid Green Race, sponsored by Morane-Saulnier (winner of the original event) and honoring the pioneer aviators 100 years ago who first flew that route.

Craig says of his vocation, “With my production name, EarthFlight, I’ve been producing aviation videos and shooting stills for 20 years now. I work from a Mooney M20-J. Clients are Socata, Bahamas, JPI, etc. Many videos are here.”  Craig is also a musician, and has provided background music for TV and films.

Several electric teams had initially indicated they would compete, but all withdrew before the start of the race.  In response to this editor’s comments about some of the terrain over which the race was flown, “I was sad that the Paris/Madrid had no electrics, but agree it would have been a very tough race over the mountains for any electric.  I made this video to help pilots see there are ‘real world’ machines out there right now, that are efficient and safe.”

Pipistrel won first and third places in the event, with pilots of a Sinus (seen us) and a Virus (vee rus) sharing the winner’s podium.  One impressive performer was the Jodel D-119, a 60-year-old design that managed seventh place, and may have been the only airplane not flying with a Rotax engine.

Thank you, Craig, for a great video of the event.