Reduced weight and component volumes are important for both cars and aircraft, allowing lighter overall construction and greater flexibility in fitting those components into compact spaces.  The U. S. Department of Energy has set 2020 targets for things like batteries and power inverters – the device that turns direct current from batteries into alternating current to run electric motors. 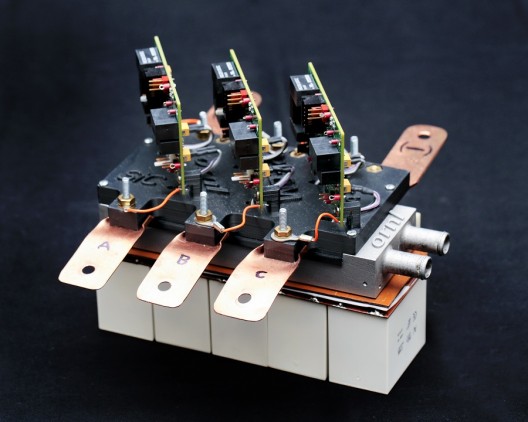 Heading this effort, ORNL’s Madhu Chinthavali led the Power Electronics and Electric Machinery Group on this project.  His ongoing efforts can be reviewed in this PowerPoint presentation.

ORNL’s design and its advantages were augmented by the use of additive manufacturing (3D printing) to produce the actual hardware.  According to Chinthavali, “With additive manufacturing, complexity is basically free, so any shape or grouping of shapes can be imagined and modeled for performance. We’re very excited about where we see this research headed.”

The ORNL reports that, “Using additive manufacturing, researchers optimized the inverter’s heat sink, allowing for better heat transfer throughout the unit. This construction technique allowed them to place lower-temperature components close to the high-temperature devices, further reducing the electrical losses and reducing the volume and mass of the package.

“Another key to the success is a design that incorporates several small capacitors connected in parallel to ensure better cooling and lower cost compared to fewer, larger and more expensive ‘brick type’ capacitors.”  3D printing also enables rapid changes within one production run, enabling improvements to be incorporated in the next prototype as quickly as computer drawings can be downloaded to the computer.

The prototype 30-kilowatt inverter is liquid-cooled and features 50 percent printed parts.  Future efforts will have up to 3D printing and strive for even lighter, more compact structures – half the size of currently available commercial vehicle units.  Chinthavali projects an inverter with four times the power density of their prototype.

Others involved in this work include Curt Ayers, Steven Campbell, Randy Wiles and Burak Ozpineci.

Research for this project was conducted at ORNL’s National Transportation Research Center and Manufacturing Demonstration Facility, DOE user facilities, with funding from DOE’s Office of Energy Efficiency and Renewable Energy.