Plastic threatens to choke the world’s oceans, five gyres or “garbage patches” of plastic debris twirling around in toxic profusion.  These plastic bits and pieces, slowly photodegrading into smaller and smaller pieces, also choke the fish and birds that feed on or in the water.  It’s a huge problem that invites grand visions for solutions

In what may at first glance seem a very small attempt to help,”Campaigning Pilot Jeremy Rowsell has made history by flying a light aircraft more than 500 miles from Sydney to Melbourne, Australia, using conventional fuel blended with 10% fuel manufactured by the UK’s Plastic Energy, from plastic waste.”

Jeremy flies a Vans Aircraft RV-9A, which uses a blend of “end-of-life” plastic waste, transformed from a pollutant into a viable jet A1 fuel by a process developed by Cynar PLC, an Irish firm.  That process has been picked up by Plastic Energy SL, a Spanish company. 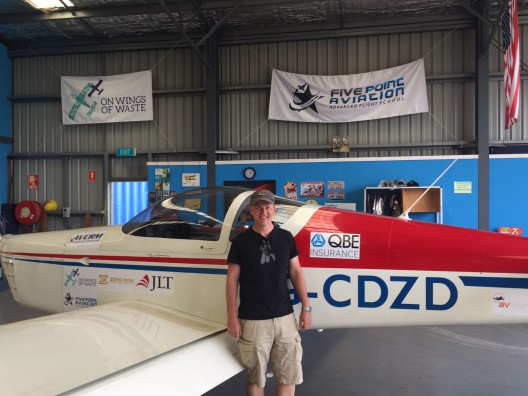 “On Wings of Waste” (OWOW) uses a “’10 per cent solution’ the ‘On Wings of Waste’ team’s campaign to inspire people to recycle plastic waste has taken four years to get off the ground,” according to OWOW’s press release.  We’ve reported on the effort since 2012.

The team promotes a four-stage proposition:

Jeremy points up the stalwart nature of his effort.  “After years of preparation and many ups and downs we’ve finally shown that the eight million tonnes of plastic dumped into the oceans each year can be put to good use.  We blended 10 per cent of fuel manufactured by Plastic Energy with conventional fuel and the flight was a dream.”

Team mate Jo Ruxton, one of the producers of the film, “A Plastic Ocean,” adds, “Plastic breaks up into small particles, mixing with the plankton at the ocean surface. Plankton is at the heart of the food chain and provides us with more than half the oxygen we breathe – our oceans keep us alive  We can’t yet safely remove plastic particles from plankton that lives in the ocean, so we must stop dumping plastic waste in the ocean. There are estimated to be 5.25 trillion particles of plastic floating – mainly at the bottom – of the world’s seas.”

OWOW shows that although an RV-9A might not consume that much fuel, the long-term effects of a 10-percent solustion could be enormous. 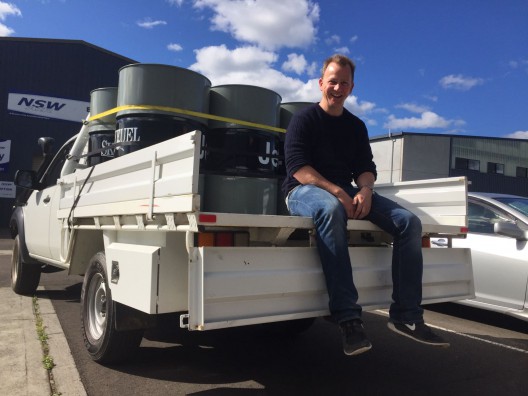 Jeremy with fuel drums. 10-percent plastic fuel could be supported by existing infrastructure

“Jeremy’s flight could have a profound effect on the aviation industry. A 747 aircraft on a 10,000 mile flight burns 36,000 gallons of fuel and 33% per cent of airlines’ operating costs are spent on fuel. If 3,600 (UK) gallons of that fuel was sourced from plastic waste it would be the equivalent of 18 tonnes of waste plastic that might otherwise be dumped in the ocean. Factor in the 1200 flights a day that are made from Heathrow, and approximately 21,600 tons of waste plastic would be transformed from pollutant to fuel – every day.”

Plastic Energy converts end-of-life plastic to fuel, getting a 95-percent useable output, with the remaining five-percent “char” used in fuel additives and pigments.  There are no toxic emissions released into the environment, according to Plastic Energy.  Its President and CEO, Carlos Monreal, is happy with the exposure the 500-mile flight has provided for his company’s efforts.  “Jeremy’s flight is a tremendous opportunity to showcase how plastic waste can be put to productive use instead of thrown away to pollute the oceans or despoil the land. We are delighted to be supporting this adventure.”

World renowned Naturalist Sir David Attenborough has backed the OWOW project saying: “The Wings of Waste flight, I hope, will bring the attention of the world to this great solution that is there waiting to be taken if only we can get the support of people to do so.”

Do us and the planet a favor.  Pick up the next discarded plastic water bottle you see.  Recycle it.  Millions of us doing that might contribute to a solution, rather than a problem.

Thank you to Richard Peel, in charge of media for the UK, EU, and USA for OWOW, for the press release and photos.