A man identified only as JetTurbine101 on his YouTube channel has been test flying a 54-propeller multi-rotor craft for the last year.  We see it evolving from back-yard flying to more open-air, higher moments in the videos below.

His August 29, 2015 video includes the most detailed description of the Swarm man-carrying device so far.  JetTurbine man groups its counter-rotating propellers into six control channels with KK2.15 stabilization, the KK2 unit being a miniature autopilot normally used on model hobby craft.  The aircraft has a takeoff weight of 148 kilograms (325.6 pounds) and a claimed maximum lift of 164 kilograms (360.8 pounds).  Its combined motor power of approximately 22 kilowatts (29.5 horsepower) runs the battery pack down in 10 minutes.

He says the machine is, “Just a bit of fun for myself, never intended for making a significant journey or flying much above head height.”  The Swarm’s approximate cost is £6000 ($9,180).

He explains the Swarm’s layout, partly as a matter of component availability.  “Props at 18 in were the largest I could find with contra rotating pitches and so defines much of the layout. Also the fine pitch allows them to turn at high speed which reduces motor weight for a given power.

He chose motor kV (the rpm for each Volt of input) “to work with 4-cell batteries with 20% or so control margin. This low margin maximizes the ESC (electronic speed controller) efficiency,” where a higher margin would result in higher circulating current losses in the ESC and motor, and reduce the craft’s endurance.

JetTurbine101 chose 54 propellers as this fits the hexagonal closely-packed layout, and could add six in the center. He admits that 18-inch props at 5,000 rpm are hazardous, but still much less so than 6.5 foot ones.   He questions where one could get low-power 5-foot props that weigh less than one kilogram (2.2 pounds and have opposite pitches?

54 props give “good redundancy as mechanical and power electronic systems are the main failure areas. I have had one ESC randomly fail already. Controls could be made fully redundant (9 x KK2.15s) so only the control sticks (and pilot) are single failure points. Redundancy increases the likelihood of failure but reduces the consequences.”  The last is an interesting point of the design philosophy for the machine.
The standard RC model propellers are in line with the pilot’s head and “the polycarbonate dome is for protection. The polythene bubble balloons up catching some ground effect pressure rise contributing to lift. It also doubles as a rain shelter…”

Closely mounted batteries, ESC and motors minimize wiring weight, “which is significant because of the high current (30 Amps).  Front and rear groups of batteries power pitching, more common that rolling so far.

JetTurbine man reflects on a problem the e-Volo designers faced and solved with a similar “fix.”  “No one has spotted the biggest flaw! That is the large number of props running at high speed means the net torque reactions are relatively low, so the craft has little yaw authority. So it probably needs a tail rotor for spot turns.”

The local Hobby King dealer must  have been delighted to sell 54 motors, controllers and propellers in one order, along with nine multi-rotor controllers. Hobby King’s description for the board indicates how far miniature electronics have come. 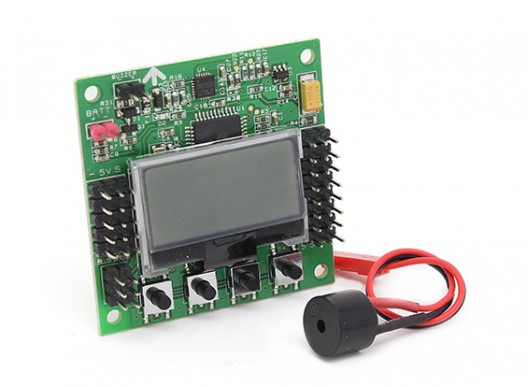 Nine Hobby King KK2.1.5 autopilots help keep the Swarm from divergent situations.  With each weighing 21 grams (0.74 ounces), all nine add only 6.66 ounces to the 54-prop machine

“The HobbyKing KK2.1.5 Multi-Rotor controller is a flight control board for multi-rotor aircraft (Tricopters, Quadcopters, Hexcopters etc). Its purpose is to stabilize the aircraft during flight. To do this it takes the signal from the 6050MPU gyro/acc (roll, pitch and yaw) then passes the signal to the Atmega644PA IC. The Atmega644PA IC unit then processes these signals according the users selected firmware and passes control signals to the installed Electronic Speed Controllers (ESCs). These signals instruct the ESCs to make fine adjustments to the motors rotational speed which in turn stabilizes your multi-rotor craft.

“The HobbyKing KK2.1.5 Multi-Rotor control board also uses signals from your radio systems receiver (Rx) and passes these signals to the Atmega644PA IC via the aileron, elevator, throttle and rudder inputs. Once this information has been processed the IC will send varying signals to the ESCs which in turn adjust the rotational speed of each motor to induce controlled flight (up, down, backwards, forwards, left, right, yaw).”

To show how mass-produced model aircraft devices might be applied to experimental aircraft, this unit, with all its capabilities, retails for $19.95.

We wish JetTurbine101 further aerial adventures and continued safe passage for the camera person, who seems to get awfully close to those blades.