Action at the sixth annual Electric Aircraft Symposium did not stop at the end of each day’s presentations, but carried into the evening hours on Friday, April 27.  Three theme dinners allowed additional speakers to present materials on motors, aerodynamics, or energy.

Paul Peterson, the founder and CEO of Volta Volare’, introduced the dinner crowd to his Volta Volare’ GT4 high-performance, hybrid aircraft, which joins Pipistrel’s Pantera and John McGinnis’ Synergy in the realm of fast, roomy airplanes that will have operating costs far below those of similar traditional airplanes.

When your editor saw news about Peterson’s creation in Popular Science, he asked Dr. Seeley if CAFE could invite him to the EAS, which received an immediate, positive response, and Peterson unveiled his airplane to an appreciative and knowledgeable audience. 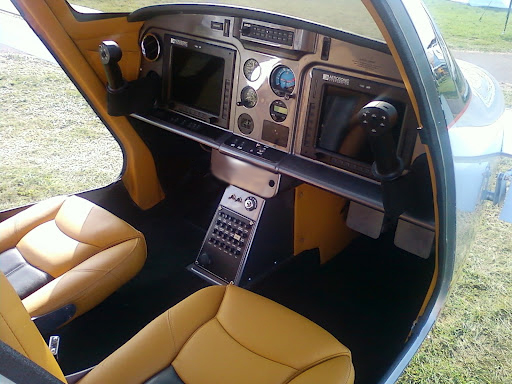 Room to spare for people and instruments

The GT4 is a four/five seat canard, currently flying and originally designed with a Continental TSIO550 engine in mind, but re-engineered from the firewall aft to house the hybrid EViation Drive system developed at Volta Volare’s Hillsboro, Oregon “skunk works.”

The hybrid system will use two electric motors to rotate the propeller, and these in turn will be powered by batteries charged by a turbocharged ICE spinning a generator.  The hybrid system, since it uses the optimum operating speed for the engine, burns just over seven gallons per hour and gives over 34 miles per gallon at a cruising speed of 240 mph (210 knots).  With a possible five people on board (with the optional rear bench seat), this could give Volta Volare’ an economical 170 passenger miles per gallon.

Peterson’s specifications for the airplane show a 2,600 pound empty weight machine capable of carrying 1,200 pounds useful load.  Subtract the 23 gallons (138 pounds) fuel load and you have 1,062 for carry people and luggage.  The airplane is claimed to have a takeoff distance of 1,400 feet, rate of climb of 1,800 feet per minute, and landing distance of 1,500 feet – qualifying it to launch and land at most paved airports in America.  The normal fuel load could carry the GT4 788 miles without a reserve.  Peterson projects 1,000 nautical miles (1,150 statute miles) at a more moderate cruising speed using 55-percent power with generator.

The airplane’s strakes provide ample room for the battery load, and when the full-electric version becomes available the Range Extender Generator (REX) and its auxiliary fuel tank will be replaced with more (and more powerful) batteries.  The aircraft was originally designed to hold over 120 gallons of avgas in the wing strakes, close to the airplane’s center of gravity, and a 23 gallon belly tank currently used to fuel the REX.

With an ambitious development plan, multiple flight modes like those of the Pantera, and projected economies of operation approaching those of Synergy, the GT4 looks like a worthy competitor and a sign of resurgence in the general aviation inventory.