Matt Shipman of North Carolina State University News Services reports on a connector that could allow stacking solar cells without losing voltage.  This stacking could allow cells to operate at solar concentrations of “70,000 suns worth of energy without losing much voltage as ‘wasted energy’ or heat.”  This could have tremendous implications improving the overall efficiency of solar energy devices and reducing the cost of solar energy production.

Stacked solar cells live up to their name, simply being several cells stacked on one another, with their layering leading to up to 45-percent efficiency in converting solar energy into electricity.  So far, the big drawback has been the junctions between cells, which tend to waste the energy from the connected cells as heat. 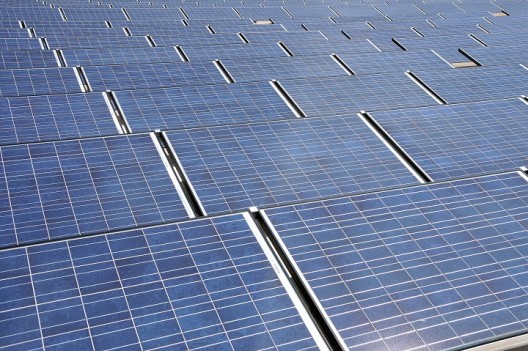 Dr. Salah Bedair, a professor of electrical engineering at NC State and senior author of a paper describing the work says, “We have discovered that by inserting a very thin film of gallium arsenide into the connecting junction of stacked cells we can virtually eliminate voltage loss without blocking any of the solar energy.”

Some manufacturers use concentrating lenses to focus solar beams on cells with the hope of extracting more energy, up to the equivalent of 4,000 suns or more.  Unfortunately, when concentrators increase solar rays to 700 suns or more, the connecting junctions in stacked cells lose this energy, bleeding off more as voltage is increased.

Bedair explains the benefit of his discovery.  “Now we have created a connecting junction that loses almost no voltage, even when the stacked solar cell is exposed to 70,000 suns of solar energy, and that is more than sufficient for practical purposes, since concentrating lenses are unlikely to create more than 4,000 or 5,000 suns worth of energy. This discovery means that solar cell manufacturers can now create stacked cells that can handle these high-intensity solar energies without losing voltage at the connecting junctions, thus potentially improving conversion efficiency.

“This should reduce overall costs for the energy industry because, rather than creating large, expensive solar cells, you can use much smaller cells that produce just as much electricity by absorbing intensified solar energy from concentrating lenses. And concentrating lenses are relatively inexpensive.”

Whether such technology can be applied to electric vehicles remains to be seen, but the best we can hope for at this time in conventional single-unit solar cells is around 20 to 25-percent efficiency.  The 100 Watts per square foot that fall on a solar panel on a good day might yield 25 Watts, with 100 square feet of solar cells on an example wing producing 2,500 Watts.  This is not enough for sustained flight in any but the most feathery of aircraft, and accounts for the use of batteries in the Solar Impulse (although that’s partly to enable overnight flights) and Sunseekers.  Batteries in these cases allow short bursts of power to enable takeoff and climb.

Whether 4,000 suns worth of energy will convert to 4,000X outputs remains to be seen, and the concentrating mechanisms necessary might not work aerodynamically, but even the partial realization of such a breakthrough would allow almost any craft to be solar powered.

According to the University, “The paper, ‘Effect of GaAs interfacial layer on the performance of high bandgap tunnel junctions for multijunction solar cells,’ was published online Sept. 5 in Applied Physics Letters. Lead author of the paper is Joshua Samberg, a Ph.D. student at NC State. Co-authors include NC State Ph.D. students Zachary Carlin, Geoff Bradshaw and Jeff Harmon; Dr. Peter Colter, a research assistant professor of electrical engineering at NC State; J.B. Allen, a master’s student at NC State; and Dr. John Hauser, an emeritus professor of electrical engineering at NC State. The research was funded by the U.S. Department of Energy and the National Science Foundation.”