The blog has looked at several recent attempts to pull electricity from solar cells that have the ability to capture a broad range of light wavelengths.  These are based on everything from layers of graphene and zinc nano-wires, to an exotic subwavelength  plasmonic cavity, to straining solar cells to form wide bandgap funnels which capture light’s energy. 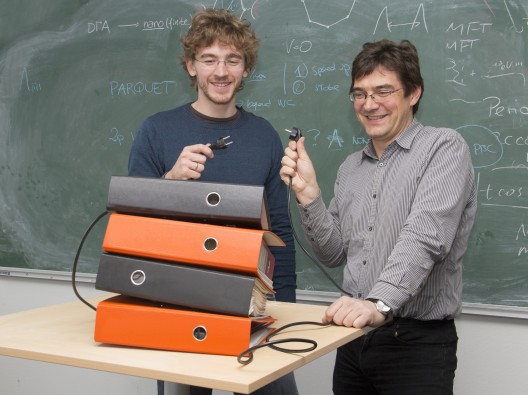 Joining these efforts along with those of researchers in America and Germany, colleagues at the Vienna University of Technology are testing single atomic layers of oxide heterostructures, a new class of materials, to “create a new kind of extremely efficient ultra-thin solar cells.”

Professor Karsten Held from the Institute for Solid State Physics at the University, explains, “Single atomic layers of different oxides are stacked, creating a material with electronic properties which are vastly different from the properties the individual oxides have on their own.”  Researchers used large-scale computer simulations to discover that these layered structures “hold great potential for building solar cells.”

The photoelectric effect which makes solar cells possible was explained by Albert Einstein in 1905.  VUT explains, “When a photon is absorbed, it can cause an electron to leave its place and electric current starts to flow. When an electron is removed, a positively charged region stays behind – a so called “hole”. Both the negatively charged electrons as well as the holes contribute to the electrical current.

A fuller rendition of this effect comes from the Nobel Prize web site.  “The photoelectric effect is a phenomenon in which electrons are emitted from the surface of matter (usually metals) when light shines upon it. Einstein explained the effect by proposing that light consists of small particles, or quanta, called photons, which carry energy that is proportional to the frequency of light. The electrons in the matter that absorb the energy of the photon get ejected. These findings were published in 1905 in the paper ‘On a Heuristic Viewpoint Concerning the Production and Transformation of Light’. Einstein’s observation that the photoelectric effect could only be explained if light behaves like a particle, not a wave, was instrumental in establishing the hypothesis that light can behave both like a wave and a particle.”

Elias Assman, who performed many of the computer simulations, says, “If these electrons and holes in the solar cell recombine instead of being transported away, nothing happens and the energy cannot be used. The crucial advantage of the new material is that on a microscopic scale, there is an electric field inside the material, which separates electrons and holes,” increasing the efficiency of the solar cell.

Oxides used to create the material are actually isolators (think of this as a kind of circuit breaker that prevents the flow of electrons).  In a seeming bit of alchemy, stacking two “appropriate” types of isolators causes the surfaces of the material to become metallic and conduct electrical current. “For us, this is very important. This effect allows us to conveniently extract the charge carriers and create an electrical circuit”, says Karsten Held.

Such metallic, all-conducting surfaces give more area to collect light and produce current.  Silicon solar cells have metal wires on their surface to collect the charge, but the wires act to block light from entering the cells, lowering output.

As with other recent efforts to expand the bandgap of solar cells, VUT experimenters are attempting to bring a wider range of light’s wavelengths into play by tuning the layers with “exactly the right chemical elements.”  This includes oxides of Lanthanium and Vanadium, which respond well to natural light.  Elias notes that, “It is even possible to combine different kinds of materials, so that different colors of light can be absorbed in different layers of the solar cell at maximum efficiency.”

Karsten Held thinks that the layered cells should be able to replace silicon units where extremely high efficiency or minimum thickness is required.

The team’s findings have been published in Physical Review Letters, with the following abstract.

Oxides of transition metals (elements of the d- and f-blocks of the periodic table) exhibit a remarkable variety of electrical, optical, and magnetic properties. Thanks to recent advances in fabrication technologies, these oxides can now be combined in layered thin-film structures (heterostructures), providing materials scientists with a wide array of options for assembling devices with tailored functionalities. Writing in Physical Review Letters, Elias Assmann at the Vienna University of Technology, Austria, and colleagues report calculations that show heterostructures of transition-metal oxides may be used to build a new class of highly efficient solar cells.

The authors consider a structure consisting of alternating layers of lanthanum vanadate (LaVO3) and strontium titanate (SrTiO3) and apply density-functional theory to describe its photovoltaic behavior; namely, how electron-hole pairs are photogenerated, swept away by an electric field, and transferred via contacts to an external circuit. They predict several features that would make these structures potentially more efficient than existing photovoltaic materials. First, these oxides have a direct band gap, so light is absorbed more strongly than in conventional silicon cells, requiring a much thinner layer of active material. Second, the materials combination can be used to engineer a so-called graded band gap, yielding an absorption spectrum that fully matches the solar spectrum. But the most innovative aspect of their scheme derives from the fact that LaVO3 and SrTiO3 have different electrical polarities: at the interface between the two, an internal electric field arises that can quickly separate and extract the photogenerated electron-hole pairs before they recombine.

Practical challenges, such as demonstrating a commercially viable fabrication scheme, would have to be overcome, but Assmann et al.’s design may offer more versatility than other emerging alternatives to silicon. – Matteo Rini