The Blog has looked at several algae-to-fuel manufacturers in its postings, and the U. S. Energy Department’s National Renewable Energy Laboratory (NREL) in Golden, Colorado adds its name to that growing list, but not in the usual commercial way.

NREL claims to have developed a “unique bioreactor,” otherwise known as their Simulated Algal Growth Environment (SAGE) reactor, which controls light and temperature to test different strains of algae and simulates various locations in the United States where particular spores would be most prolific. 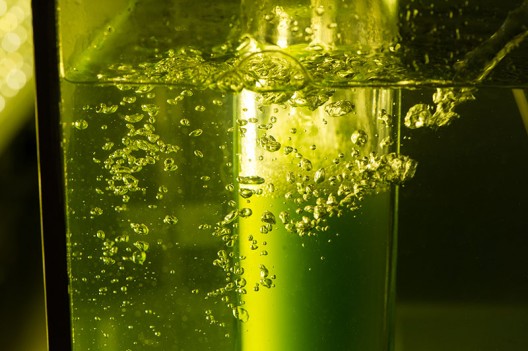 “Bubbling crude” takes on a new and cleaner meaning at NREL

NREL’s hope is to use SAGE to “produce algae that could someday compete with renewable diesel, cellulosic ethanol, and other petroleum alternatives as transportation fuel.”

“It does so by revealing the intricate biochemical rearrangements that algae undergo when grown in different locations in the United States. The bioreactor has also demonstrated that algae grown in ideal climates and given the optimal amount of nutrients can produce not just lipids, but proteins and carbohydrates that can be turned into diesel, butanol, ethanol, and other fuels useful to industry.

“’We’ve almost doubled the fuel we can get out of the same amount of biomass by using these additional components,’ said NREL Senior Scientist Lieve Laurens.” 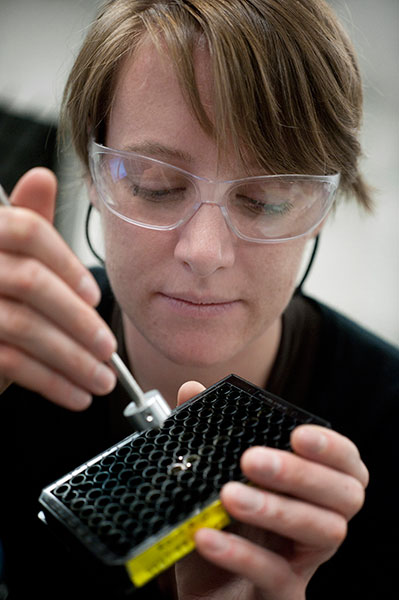 Senior Scientist Lieve Laurens is part of the team working on a unique bioreactor that can help find the ideal locations for algae farms. Algae-based fuels could someday compete with renewable diesel and cellulosic ethanol as transportation fuel.
Photo by Dennis Schroeder, NREL

This ability to grow different products that lead to different fuels gives SAGE a versatility that other, more focused algae-to-fuel systems may lack, and allows for  optimizing “champion” strains of algae to produce high volumes of biofuels in the right place and clime.  These hard-working strains produce particularly high levels of the desired lipids used to produce Diesel fuel, proteins for butanol or methane, and carbs that can lead to a “third fuel” such as ethanol.

NREL and Arizona State University are working to identify and optimize the various processes and outputs, since industry wants all possible biofuels now, as opposed to an earlier insistence on getting single outcomes.

This broadened interest repays NREL’s efforts from 1978 to 1996 to catalog algae.   “It’s fun to think it’s all coming back,” said Bioconversion Engineer Nick Nagle. “We’re now working with industry partners and other universities, collaborating and really moving this forward.” 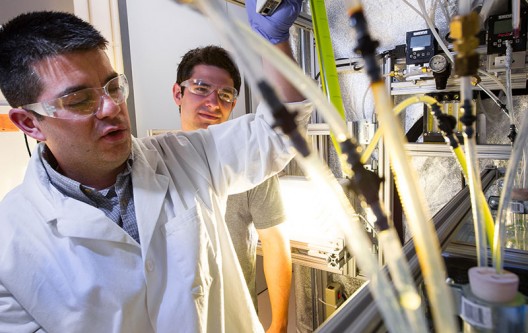 After a short-lived love affair with algae fuel production in the 1980s, industry is coming back, still intrigued with the promise of such clean fuels, but wiser in its assessment of what it can expect.

With three champion strains of algae bubbling away in the reactor, productivity is high, allowing about “five times the culture volume of other similar commercially available controlled-environment reactors.”  Things are more quickly grown, owing to “Optimal conditions—nutrients, carbon dioxide, and sunlight—lead[ing] to the extra energy capable of doubling the algae’s productivity,” and allowing harvests every other day.

Laurens and Nagle “trick” the algae into different desired behaviors, enabling creation of different fuels as end products.  Cutting back on the nitrogen supply, for instance, causes the algae to go into storage, rather than growth mode.

Nagle explains, “Once the algae run out of nitrogen, they turn into couch potatoes.  The cells start eating a lot of carbon and sitting around, putting on weight. That weight is literally in the form of carbohydrates and oils—just what the biofuels industry needs from the little critters,” according to NREL.

The “feed and starve” rotation is one useful pathway to getting more oils out of the algae.

With energy companies willing to be patient and await new findings, the NREL team can develop new strains of algae while enjoying new investments and receiving “consistent” funding from the Energy Department’s Bioenergy Technologies Office.

“Cost is falling steadily, and ‘you’re not going to run out of algae’ as production increases, Nagle said.”

As their report concludes, “NREL will remain a key player, ‘a good neutral third party in the game, doing our own great research but also keeping our finger on the pulse of industry,’ Laurens said. ‘It allows us to gauge who is where. And we see that that there’s a lot going on, that they’re starting to take this very seriously. We’re seeing companies that are serious, that have significant plans for the commercialization of algae.’”