Reported widely late last year as a “Junkyard Wars” contraption, University of Toronto researcher Illan Kramer’s spray rig for coating just about anything with a thin film of colloidal quantum dots (QCDs) offers the potential for making Kramer’s hopes come true.  “My dream is that one day you’ll have two technicians with Ghostbusters backpacks come to your house and spray your roof.” 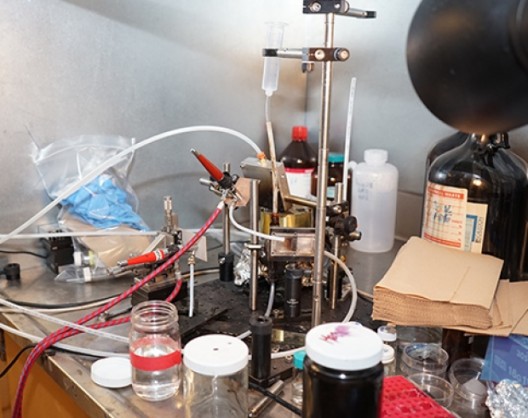 Kramer is a post-doctoral fellow with The Edward S. Rogers Sr. Department of Electrical & Computer Engineering at the University of Toronto and IBM Canada’s Research and Development Centre.  His spray equipment, composed of a “spray nozzle used in steel mills to cool steel with a fine mist of water, and a few regular air brushes from an art store,” manages to spread colloidal quantum dots with the precision usually found in atomic layer deposition managed in laboratory or carefully-controlled manufacturing conditions.

His sprayLD ” blasts a liquid containing CQDs directly onto flexible surfaces, such as film or plastic, like printing a newspaper by applying ink onto a roll of paper. “    The solar-collecting QCDs “could be used to coat all kinds of weirdly shaped surfaces, from patio furniture to an airplane’s wing. A surface the size of your car’s roof wrapped with CQD-coated film would produce enough energy to power three 100-Watt light bulbs—or 24 compact fluorescents.”  The implications for an airplane, with its large wetted area covered with the film include range extension for an electrically-powered aircraft, or all-day soaring for a motorglider.

Kramer has reported his progress in papers in the journals Advanced Materials and Applied Physics Letters, showing “that the sprayLD method can be used on flexible materials without any major loss in solar-cell efficiency.”

CBC reports,  “’As quantum dot solar technology advances rapidly in performance, it’s important to determine how to scale them and make this new class of solar technologies manufacturable,’ said Professor Ted Sargent (ECE), vice dean, research in the Faculty of Applied Science & Engineering at University of Toronto and Kramer’s supervisor. ‘We were thrilled when this attractively manufacturable spray-coating process also led to superior performance devices showing improved control and purity.’”

The University reports, “In a third paper in the journal ACS Nano Letters, Kramer and his colleagues used IBM’s BlueGeneQ supercomputer to model how and why the sprayed CQDs perform just as well as—and in some cases better than—their batch-processed counterparts.”

The Canadian Broadcasting Company (CBC) reports that the spray-on’s efficiency is not quite the 10 percent needed to become commercially viable.

“’We’re close,” Kramer says. Their best measured efficiency is 8.1 per cent.  So, we’re getting there.’”