At an airshow in Gergy-Pontoise, France this year, according to Anne Lavrand, head of Electravia and motor supplier to the little electric speedster, “Spectators were able to admire the return of the famous Shuttle Bretonne,” a Broussard liaison aircraft carrying the Cristalline Cri-Cri aloft.

Anne Lavrand explains, “At the end of the 90s, Yves Duval, Hughes’ father, presented in airshows the “Breton Shuttle”: a Broussard with a small Cri-Cri on its top for the take-off, then… during flight, Cri-Cri takes off from the Broussard and flies by its side. At that time, both aircraft were sponsored by the company Brittany Ferries. The installation of Cri-Cri on the Broussard required some means of lifting:” 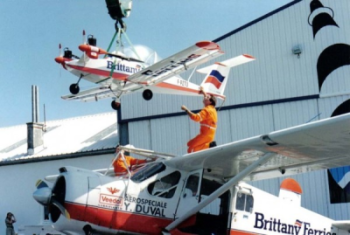 Setting the 90's two-stroke Cri-Cri on the Broussard

“In 2000, the Cri-Cri was equipped with single-cylinder gasoline-fueled, two-stroke engines; 12 years later, it is electric, with two engine Electravia E-Motors of 35 HP each and two E-Props counter-rotating propellers.”

Comparisons between the 985 cubic inch radial engine on the nose of the Broussard and the relatively tiny and quiet electric motors on the Cri-Cri could not be more amazing. Old technology and new contrast the past and the future in a very exciting way. 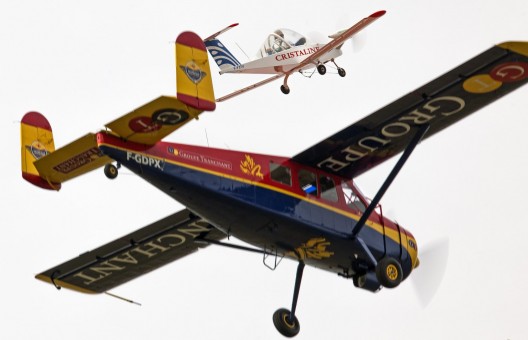 Anne notes that the Cri-Cri was scheduled to attempt a new speed record at this meeting, beating the 283 kilometers per hour (175 mph) set last year, “But the Commissioner of the expected France Aero Club was unfortunately absent. This attempt will take place at a later date.”