With Boeing facing financial doldrums because of its ongoing grounding and resulting slump in sales of the 787 Dreamliner, the stakes are high for the company.  That makes today’s Reuters’ report that the manufacturing giant may have found a “way to fix battery problems on its grounded 787 Dreamliner jets” good news for not only Boeing, but for electric aircraft in general.  Readers should read these findings with some caution, though, since another report from Japan gives a different possible cause for the problems.  That said, the two reports might not be mutually exclusive. 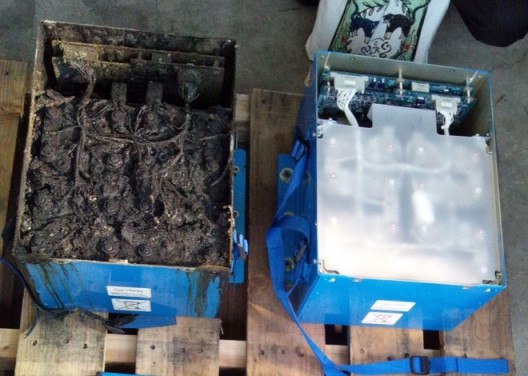 Many electric light aircraft developers use spacing between cells and some method to circulate cooling air over them.  In Boeing’s two 787 lithium battery packs, eight large cells fill a fairly tight housing.  Reuters quotes an anonymous source, “’The gaps between cells will be bigger. I think that’s why there was overheating,’ said the source, who declined to be identified because the plans are private.

“A spokeswoman from the U.S. National Transportation Board declined comment on the report or any Boeing plan to return the 787s to the air.

“’The decisions to return the airplane to flight will be made by the FAA and only after Boeing has demonstrated to them that the solution is adequate,’ Nantel said. (“Nantel” is probably Kelly Nantel of the NTSB – although the article did not include additional identification.) ‘We continue to investigate the cause of the short circuiting.’

“A spokeswoman from the U.S. Federal Aviation Administration declined to comment….

“The logical solution for Boeing would be to install ceramic plates between each cell and add a vent to the battery box, Kiyoshi Kanamura, a professor at Tokyo Metropolitan University who has conducted research with several Japanese battery makers, told Reuters on Tuesday.” 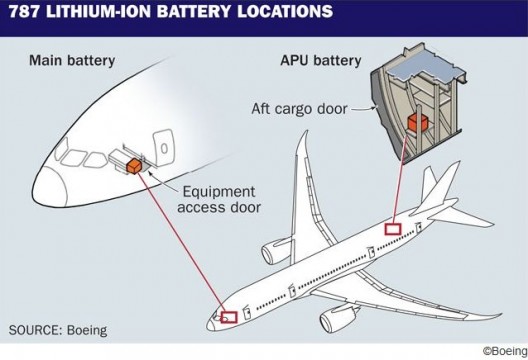 King 5 Television in Boeing’s Seattle home gives another possibility, as it reports on findings by Japan’s Transport Ministry.

“Meanwhile, a probe into the overheating of a lithium ion battery in an All Nippon Airways 787 found it was improperly wired, Japan’s Transport Ministry said Wednesday.

“The Transport Safety Board said in a report that the battery of the aircraft’s auxiliary power unit was incorrectly connected to the main battery that overheated, although a protective valve would have prevented power from the APU from doing damage.  (Your editor is a bit perplexed by a “valve” in an electrical circuit.  Explanations gladly accepted.)

NOTE: Thomas Boyle, a well-informed reader, sends the following explanation: “‘Valve’ is a now-antiquated term in electrical engineering. In modern terminology it would be a ‘diode’. A diode is a device that allows electrical current to flow through it in one direction, but blocks current from flowing in the opposite direction. The translator appears to have used the older term.”  Our thanks to Mr. Boyle.

“Flickering of the plane’s tail and wing lights after it landed and the fact the main battery was switched off led the investigators to conclude there was an abnormal current traveling from the APU due to miswiring.

“The agency said that more analysis was needed to determine what caused the main battery to overheat and emit the smoke that prompted the Jan. 16 emergency landing of the ANA domestic flight and the worldwide grounding of Boeing 787 jets. They said they are consulting Boeing about the issue.”

As noted above, either or both explanations could be true.

Boeing uses two identical lithium ion battery packs, with cells made by the Japanese manufacturer Yusas and using a lithium cobalt chemistry. These packs replace or augment engine starting or other hydraulic systems.

Electravia in France, with over 35 different electric aircraft flying, and others in the U. S. and Slovenia use similar chemistries. Randall Fishman uses lithium polymer cells in his ElectraFlyer craft, but with flow-through cooling which moderates temperatures and vents any products of overheating – an unlikely event because of the low-discharge way Randall pulls current from his battery packs.  None of these manufacturers have reported battery problems that would lead to an emergency landing.

Anne Lavrand of Electravia follows somewhat the same approach, explaining   “Our customer applications up to now lead to low discharge rates and discharge time lower than 1 hour.  In such conditions, we note around 20 °C battery temperature increasing during discharge. So it is not useful to implement a specific air cooling between cells.”

She said there have been no issues with the Kokam cells her firm uses, and that PCM (circuit protection modules) and BMS (battery management systems) help ensure safe running.

It is critical for Boeing to resolve this issue, since it has 50 Dreamliners cooling their wheel wells and no incoming cash flow even though it is producing aircraft daily.  Maybe they’ll find ideas from  small electric aircraft.