A technique used by jungle aviation missionaries over 50 years ago may provide an answer to aerial delivery problems such as dropping water on the current radioactive fires in Japan, according to Gaylord Olson, a Princeton, New Jersey reader of the CAFE Blog.

Nate Saint was a Mission Aviation Fellowship pilot and missionary to the Auca Indians in the Ecuadorian jungle when he and four others were killed in 1956 by members of the tribe.  Life Magazine published a 10-page article on the group’s martyrdom, and two movies depicted their lives and last hours.  Saint was also an inventive soul, who may have know about early patents for a system he called the “bucket drop,” a method for delivering equipment and supplies to the floor below a rain forest canopy.  In the video, Saint’s son Steve demonstrates the technique.

Multiple aircraft would start by flying initially in the same direction, then start turning around one another to provide a focus for the lines going to the payload.  This “orbit” procedure would allow pickup and lifting of the payload to a safe altitude, at which point the airplanes would “de-orbit” and gradually assume the same path to the drop-off point.  A  “re-orbit” maneuver would allow delivery and placement of the payload at a precise location.

Wilson and Bennett seemingly had no limits to their idea, positing the idea of applying such lifts to a Lockheed C-130.  Imagine multiple Hercules living up to their name in the heavy-lift category.

Paul Williams and Wubbo Ockels of the Delft University of Technology, who credit Saint with demonstrating the technique, caution that such maneuvers put the aircraft at an extreme for stall speed and high bank angles, requiring great care in piloting.  They also suggest a dual cable arrangement to the payload to ensure the load will be placed within the center of gravity of the lifting aircraft and to damp oscillations that might cause any imbalance.

Olson notes that even Williams and Ockels show that the use of long lines would reduce the angle of bank for each aircraft circling the payload, and not lead to the stall/bank angle problem noted earlier in their own paper.   Shallow bank angles could be maintained by the lifting aircraft if the lines were over 1,500 meters long – depending on the mass of the payload, and would also allow the aircraft to remain at coefficients of lift far removed from the stall.

Williams and Ockels further list Francois Alabrune’s patent, labeled as “The Art of Aerial Transportation (United States Patent 2,298,912) as the source of using more than one aircraft.

Obviously, this is not a simple task, even for one airplane.  Alabrune’s diagrams of the orbit and re-orbit processes show the challenges involved. 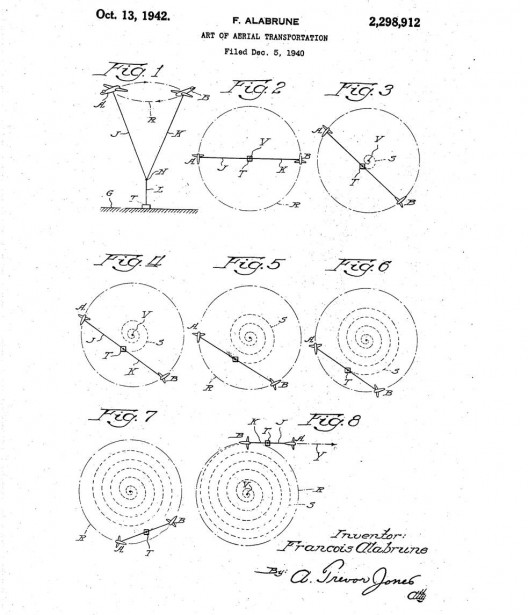 Gaylord suggests that using electrically-powered craft with precision GPS systems could allow a two, or even three-aircraft flight, with the ganged aircraft able to lift two or three times the amount for a single airplane.  He notes that two lines would allow the load to be moved sideways by winds, while a third line would maintain tension regardless of wind direction, and thus allow the formation to hold the load in a tightly-controlled location.  Unmanned electric aircraft would also have the possibility of highly precise throttle control, which coupled with GPS guidance and similarly precise control inputs though fuzzy logic programming would permit pin-point delivery or pick-up of payloads.

Considering the scenes of helicopters forced to dump water from high altitudes above the stricken Fukushima nuclear plant, more precise delivery might make the difference between successful cooling of the radioactive waste and catastrophic meltdown.

Gaylord Olson, EAA 795970, would like to communicate with people interested in this neglected area of aerial science.  He notes five reasons for considering his dual-aircraft method of payload delivery:

1.  For a given heavy load (10,000 pounds or more),  two fixed wing planes are a factor of 10 lower in base price compared to a single helicopter.

3.  With the propulsion units always far away from the passengers, the noise is much lower with the fixed wing planes.

4.  Perhaps a factor of two or three higher speed with fixed wing planes instead of a helicopter.

5.  Greatly reduced chance of any bird strike accident and elimination of the helicopter brownout problem [a situation in which dust or sand blown up by the    helicopter’s rotors obscures visibility].

Gaylord also feels that if people going to airports for travel of 500 miles or less could be dispersed to multiple small heliport-type locations, the ground and air congestion around major airports would be greatly reduced.  This should be better from both a safety and convenience standpoint.  Gaylord can be reached by email at gg_olson@yahoo.com.

The Saint family exercised the precepts of their faith, not only forgiving the tribesmen who killed their loved ones, but starting a school in Shell, Ecuador to fulfill Nate’s idea of providing education to the local indigenous people.

Nate’s son Steve now heads a non-profit organization called I-Tec (Indigenous People’s Technology and Education Center). His design for a flying car, the Maverick, is an attempt to solve transportation issues in hard-to-reach areas throughout the world.  It has been shown at Oshkosh and won a Popular Science “Best New Idea” award.  The Christian Daily News concluded,“Saint notes that he and his team have solved the problem of what to do when you come to the end of a road – you fly.”

The Saint family has helped redeem a sad turn in their lives 55 years ago.  Perhaps refinement of the bucket drop technique that Steve Saint developed will help to redeem broader crises in the future.