EV World announced a new electric para-motor, complete with a new motor, composite mounts, and a series of battery pack setups.  Made in France, a complete setup with parasail, motor, controller, batteries and controls costs 14,210 euros ($16,057).  This may seem pricey, but consider that a paramotor can be carried in a pickup or SUV, needs no airport, and is truly “free flight,” avoiding a lot of the rules that encumber much of general aviation. 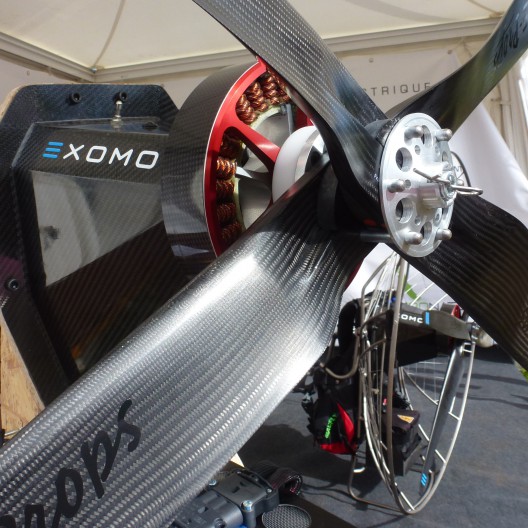 Exomo’s motor is made at ACS, also the site where Airbus makes the e-Fan

George Blottin, the founder of Aeronature, a parasail and paramotor training site in southern France, wanted something that would avoid the noise and occasional failure of two-and-four-stroke engines.  Electric motors fit that bill, and he worked with a participant on the Airbus e-Fan project to create one that met the specialized needs of paramotoring.

His firm, Exomo, can provide the 15 kilowatt motor with a variety of battery packs, ranging from a 15-minute, 25 Amp-hour unit, through a 30- to 45-minute, 45 Amp-hour pack to a 60-minute pack of unspecified capacity.

Such flying needs a low-rpm, high-torque motor to provide thrust at low speeds, and the Exomo’s direct-drive configuration would seem to fit that requirement.  With an e-Props propeller, the motor can produce over 60 kilograms (132 pounds) of thrust.

Exomo’s web site explains, “The EXOMO engines are developed and assembled to aircraft specifications at ACS, the aeronautical specialist of electrical propulsion” that makes the E-Fan for the Airbus Innovations Group.

This experience with Airbus projects, including the electric Cri-Cri, has produced a clean system that can replace a good many noisy two-stroke setups on parasails.  To show the electric powerplant’s advantage here, sound levels at a very low fly-by are pleasant and low-pitched.

At 200 meters, any motor or propeller sound is barely perceptible.

Exomo reports their motors helped their team pilots win a world championship in the slalom competition held in Legnica, Poland last year.  Looking like a low-speed Red Bull Air Race, the slalom requires a cool level of piloting and power to make the incredibly tight turns around the pylons.

To enable future training plans, Blottin indicates a two-place version of his paramotor may be in the works.