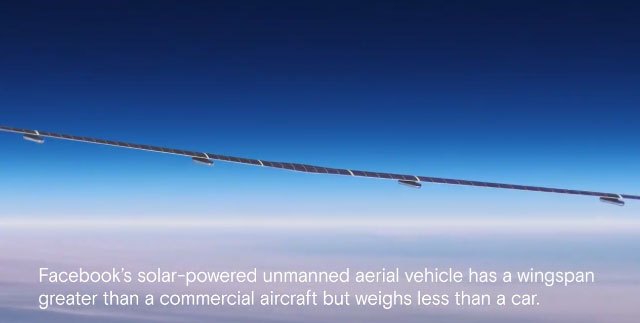 Two years ago, Mark Zuckerberg, the head of Facebook, promised a far-reaching goal for his firm.

”Today, we’re sharing some details of the work Facebook’s Connectivity Lab is doing to build drones, satellites and lasers to deliver the internet to everyone. 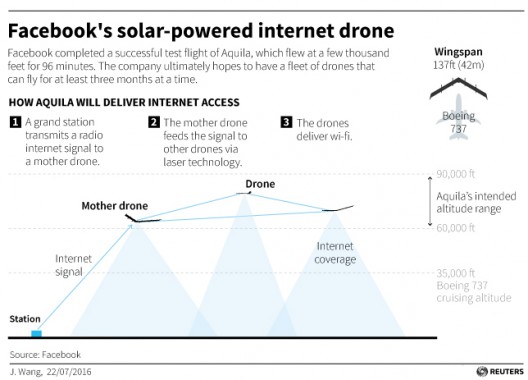 ”Our goal with Internet.org is to make affordable access to basic internet services available to every person in the world.”

We reported on this activity almost a year ago, and provided technical details that are coming to fruition with the first flight of the Aquila drone, a large flying wing that looks a great deal like the Prandtl-D research vehicle designed by Al Bowers and a group of graduate students.  A primary difference – Facebook’s machine has winglets or tip rudders to assist in directional control.

The Facebook video shows the highlights, but the following video from the BBC gives more detail and insights from Jay Parikh, head of global engineering for Facebook.

Note that the launch vehicle has additional motors and propellers to assist acceleration on takeoff.   As a side note, the motors on the aircraft appear to be Joby types.

If Zuckerberg’s dream for the future comes true, a virtually-interconnected world becomes a real possibility.  Such stratospheric persistence will be a good deal less expensive to launch and maintain than traditional space satellites.  As noted before, the introduction of cell phones in the developing world allowed remote villages to find useful news, weather reports, and even markets for their products.  For those areas of the world without an electric grid, the possibilities of local solar power coupled with communications links from the skies could make all the difference between poverty and prosperity.

Zuckerberg and the leaders at Google (with their competing balloon approach to such connectivity) could expand the reach of shared knowledge and commerce in new and exciting ways.