The Federation Aeronautique Internationale (FAI), standards setter and record keeper for the aviation world, recently added new classes of records, including those for solar-powered airplanes (CS).  Such classes can be broken down by sub-class and category as necessary. 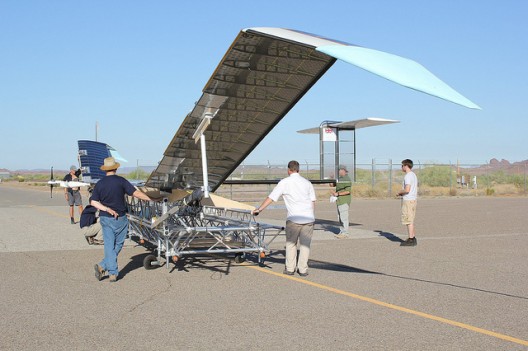 Qinetiq’s Zephyr unmanned aerial vehicle (UAV) achieved several records in the UAV category in July, and these were made official December 23 by the FAI – a neat Christmas gift to the team.  As noted in Qinetiq’s press release:

In the manned aircraft category, at least for now, Klaus Ohlmann holds all the solar-powered records for a series of flights in the Icare 2, a 1996 photon-propelled aircraft from the Institut für Flugzeugbau (IFB) at Stuttgart University.  Two were set on September 5, one for a 367.8 kilometer (228 mile) distance using up to three turn points, and the second for a free distance of 375.7 kilometers (232.9 miles) using three turn points.  Ohlmann’s third record involved a free out-and-return distance of 155.8 kilometers (96.6 miles) on September 22, and the fourth was for a free distance flight of 200.4 kilometers (124.2 miles) on October 3.

Since most internal-combustion motorglider records require some proof of restricting use of the engine for anything other than launching during a record attempt, it seems a bit curious that Ohlmann included at least occasional use of the tail-mounted motor during his flights, although the CS category is for solar-powered airplanes, and not specifically for motor gliders.

As noted by YouTube, “Klaus Ohlmann set a World Record for solar-powered aircraft when he flew a “three turn points” task of 367.8km in the Hautes-Alpes in Southern France. German Klaus Ohlmann holds the highest number of FAI-sanctioned records flying sailplanes. Icare 2, built by the IFB of Stuttgart University, carried the livery of Japanese watch manufacturer SEIKO, which is preparing to launch a range of solar powered watches.”

It will be interesting to see these records fall if the Solar Impulse team decides to declare official record attempts, although even these pale in comparison to Ohlmann’s pure sailplane records, including his 3,008 kilometer distance flight   (1,865 miles) in Argentina in 2003.