A Seraph is a six-winged angel in the first sphere of the celestial hierarchy, and while the earthly form in Richard Ike and Ira Munn’s vision may have fewer wings, it is no less inspired. 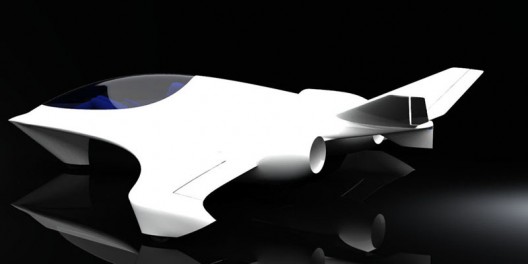 The Seraph, looking very otherworldly and pristine in its form

In part, it’s inspired by biomimicry, imitating nature in its forms and even its structure.  The  airfoil-shaped profile of the fuselage “reduce[s] drag and optimize[s] aerodynamic efficiency, the blended-wing-body and lifting body (flying fuselage) maximize lift and produce minimum drag, according to Seraph’s web site.

Seraph explains, “Flight with the Seraph will be made possible by two factors, lift generated by airfoil and lift generated by vortex.  The later factor is a return to a principle originally explored by Leonardo Da Vinci.”  Their site further explains that, “This new field of study is called ORGANIC AERONAUTICS, or ‘Green Aviation’ (Aerospace inspired by nature). It is also a discipline of the science called Biomimicry: using nature as Model, Mentor, and Measure.”

Its exo-skeletal structure emulates insect construction, one of the highest strength-to-weight approaches in the world, and one applied by Burt Rutan in his designs.  Composite materials, lighter and stronger than steel, allow the composite shell of the craft to double as the main support structure.  An interwoven fabric forms the upper shapes, while carbon forms the lower, with the upper surfaces vacuum bagged for lowest resin weight and the lower surfaces being formed in a vacuum infusion process.  Al Timmons, Seraph’s composites specialist, can be credited with this innovative approach.

The approximately 200-pound airframe would encapsulate a power system that weighs about 200 pounds and a more-or-less 200-pound pilot for its target 600 pound total.  Its 15-foot span would guarantee that it would “not have the greatest glide ratio,” according to Ira Munn, but would still be capable of traveling the Green Flight Challenge’s 200 miles on less than three liters of biofuel.

To accomplish its fuel-burn goals, Seraph has a core Diesel generator, which generates high-torque horsepower and feeds electricity to 60 ultracapacitors, which store 3,000 farads each, and in turn feed a pair of high-output motors based on wind turbine technology.  Each motor turns a nine-bladed fan housed in a wing-mounted duct which incorporates noise mitigation technology “to all but eliminate both prop and engine noise.”  A pair of mini-12-Volt batteries will start the Diesel generator.   Andre’ Williams, Co-founder of Regenerative Electrical Power Systems, Inc. developed this unique hybrid configuration.

The pilot will sit in a roomy cockpit which can accommodate a 6-foot occupant and employs an“XTreme Avionics display from Matt Liknaitzky of MGL Avionics, based in Torrance, California.”  Displays will include “GPS positioning, altitude, attitude, fuel, airspeed and more.”  Control will be executed from “non-intrusive joystick control interface and systems architecture.”

Seraph, which did make it into the Green Flight Challenge because proper FAA inspections could not be completed in time, will be on display at the Green Flight Expo at the NASA Ames Research Center at Moffett Field on October 3, 2011.  Get tickets for this free exhibit sponsored by Google on the CAFE Foundation web site.

Ira Munn has been invited, also, to be a keynote speaker at the Reactor Cafe Speaker Series (no relation to CAFE) on September 22nd at the Irvine Valley College Performing Arts Center in Irvine, California that will draw business leaders, community officials, parents, children and more to engage on roles in scientific fields.  His presentation will be part of three representing, “Super Cars, Super Trains, and Super Planes.

We look forward to seeing Seraph at the Green Flight Expo, and will bring our readers further details on this exciting aircraft in October.