Strategies for doing more with less may include aerial refueling for extended range flight with larger payloads, and formation flights on common routes like those of migrating birds to reduce induced drag.  New sources of power may include hydrogen fuel cells and podded or integral batteries.

Although the last option filled most of the talk, it came with the caveat that given current levels of battery development, it would take 5.5 million pounds of cells to produce the same energy derived from 60,200 pounds of Jet A.   That fuel figure is based on Hoisington’s example airliner with 154 passengers and a range of 3,500 miles.  The airliner’s takeoff weight is185,000 pounds – about a third of that in fuel.  Converting that substantial fuel load to batteries will test the best engineer.

An interview with Hoisington in TechNews Daily shows the implications inherent in this scenario.

“This is because jet fuel supplies a lot of energy for its weight — technically, some 11,900 watt-hours per kilogram — while those batteries offer about 200 times less.

“However, in light of rising fuel prices and concerns about the environmental impact of fossil fuel use, researchers are taking the concept more seriously. 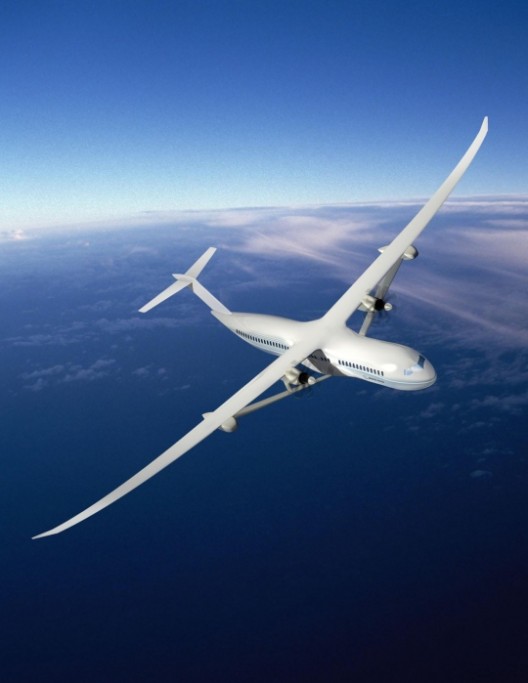 As with George Bye’s electric Cessna, there are some factors in the plus column for electric airliners.  Jet engines make Jet A into thrust with about 40-percent efficiency.  Electric motors can extract kilowatts at efficiencies in the high 90-percent range.  Even with those advantages and high-efficiency batteries possible in the future, the electric airliner will have to pull out all the stops in becoming a reality.

Hoisington made reference in his talk to the “N+3” program initiated by NASA as a challenge to industry and academic research groups.  Taking “N” as today’s airliner and “+3” as the third generation from current practice, NASA desired several goals.  These include a 70-percent reduction in fuel burn performance, 75 percent lower nitrous oxide emissions, a 71-decibel reduction in noise, and reduced congestion around airports.

Investigators from Boeing and its partner Georgia Institute of Technology, and three teams comprising Grumman, Cessna, MIT, and others devised concept vehicles.

According to Aviation Week, “NASA says that the concepts from the four teams were able to meet either the fuel burn or the noise goal, but not both, so it will be reassessing the overall goals to determine which need more time to get from the lab to operational use.”

Hoisington shared the amusing range of acronyms that came with the SUGAR project.  An early turbofan effort was dubbed Refined SUGAR, but fell short of NASA goals.  Subsequent efforts produced SUGAR High, a long-winged, strut-braced airplane with advanced turbofans that should become available in a few generations.  The final design is SUGAR Volt, a turbine-electric hybrid which would use electric power for short-range flights and turbines for long range trips.  Some payload would be displaced by almost 21,000 pounds of batteries.

In a final thought to TechNews Daily, Hoisington explained this research “is the most far out piece of work at Boeing Research & Technology. It’s definitely not near-term. If it does happen, it probably won’t happen for 20 or more years.”