For analyzing the greatest economy from an aircraft’s design, Howard Handelman, a highly-engaged reader of this blog, provides a link to his web site, which includes a downloadable spreadsheet he has devised that will give the inquiring reader hours of enjoyment.

Handelman, self-described as, “just a retired IT guy,” with “weak math skills,” but a “compulsively curious” nature, has devised a tool for analyzing any airplane’s performance based on a few known variables, and which he has applied to many of the Green Flight Challenge’s aircraft.

The basis for his analyses is his “triangle tool,” a wedge that can be used to help design propellers, “test [the] truth” of claimed aircraft performance, and estimate brake horsepower in real life circumstances (at least within the parameters of the triangle tool).  Handelman notes that some aircraft, including those with laminar flow, will “not fit the model very well because they don’t fit the V-squared curve.  Synergy won’t look anything like the model.” 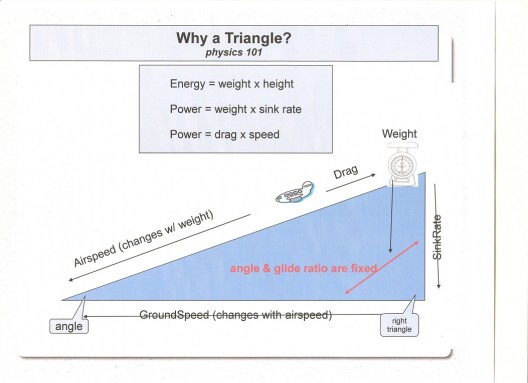 His findings are bound to be controversial, and certainly provide a basis for an ongoing discussion.  Based on an analysis of several GFC challengers – individually evaluated on his site, Handelman reaches several conclusions he will elucidate in his presentation at Oshkosh’s AirVenture 2011.

Greenelis, for instance, may reach the GFC minimums, but its numbers conflict – and he thinks it is unlikely that the existing figures can be reconciled.  He calculates that the Embry-Riddle Eagle can reach the GFC minimums – just barely.  Looking at the four-passenger Pipistrel Taurus G4, he concludes that it can do more than double the required economy and still manage better than 150 mph at greater than 200 passenger miles per gallon energy equivalent (PMPGe).  Hopeful for John McGinnis, but subject to limitations of the spreadsheet, according to Handelman, Synergy may do even better on its total score than the Pipistrel because of Synergy’s higher speeds.  He notes that Elektra One, and by inference the Feuling Green Flight Challenger, is at a severe disadvantage being a single place aircraft.

His spreadsheet allow calculations of fuel use, including energy equivalents for electric aircraft.  For readers who want to do their own handicapping, he provides a generic spreadsheet that can accept tweaks to existing numbers, or incorporate a whole new design.

His home page includes his Sport Aviation article, “Power and Drag for the Common Man,” and an overview of his own well-turned RV-7A.  His interest in aircraft performance measurement, and correspondence with CAFE Foundation luminaries such as Jack Norris, have informed his insights on performance calculation.  He notes, for instance, that modern aircraft engines, not having the thrust movement older engines exhibit cannot use Norris’ zero-thrust measurement that was crucial to CAFE’s highly accurate flight measurements.  He suggests a torque meter for helping measure newer aircraft’s actual performance.

Handelman will speak at this year’s AirVenture at 10:oo a. m. on Friday, July 29 in the HomeBuilder’s Hangar, and hopes there to continue the ongoing discourse.

He also carries on a lively discussion on the Homebuilt Airplanes forum, which sometimes generates a spirited debate, but always searches for verifiable numbers.  Howard adds, “Alas, it is worth saying that the ‘truth’ of the calculations is no better than the input.  Such things as battery energy density and best glide speed are just educated guess work intended to narrow the range of possible true answers.  I don’t want to be or be seen as a know-it-all so much as a good analyst with lots of questions.”