John Carpinelli has a lofty vision, borne on gossamer threads that would pull giant cargo planes into the heights. We’re familiar with the rapid ascent of a sailplane on a winch tow, pitching up into a fighter-like climb and dropping off the towline at some predetermined altitude. What if the tow ropes were attached to a large, electrically-propelled airplane, pulling a heavy jet transport to a point several kilometers above its launch?

It’s not as wild-eyed as it sounds – at least according to the CleanTech Open organizers. The Cleantech Open is an organization looking to find, fund and foster startup companies in green industries, and chose Electric Takeoff, Carpinelli’s firm, as a semifinalist in the Transportation category in their recent competition.

Basing his work at least partially on the “bucket drop” technique created by missionary pilot and martyr Nate Saint, Carpinelli has the advantage of a degree in electrical engineering and the historical work of others who took the bucket drop to new levels, so to speak, even suggesting that aircraft as large as C-130 Hercules cargo aircraft could even be paired to lift extremely large objects. 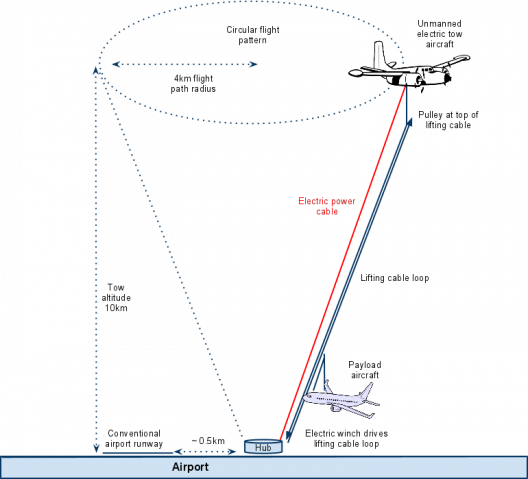 What if the C-130 was electric, taking its power from the electricity grid using a tether/cable system that allowed the airplane to reach 30,000 feet? High molecular weight polyethylene (HMPE) fibers such as Dyneema have extreme strength-to-weight ratios, are already being used in aviation and can be made in streamlined form for aerodynamic cleanness, much like the flying wires that once held biplanes together. Carpinelli’s analysis of weight and aerodynamics says it’s possible to use such materials in his high-rise launch method.

The tow airplane or airplanes in the sky are connected to the ground through an HMPE cable loop, attached to a ground-based hub that rotates very slowly, one turn every two minutes – or a standard rate turn in IFR (instrument flight rules) maneuvers. A second cable loop provides lifting force to a payload airplane hooked to it in a three-point sling arrangement. The force comes from a winch on the rotating hub, which takes its power from the local electrical grid. Carpinelli explains that using available electric power is not only cheaper than using jet fuel, but provides a more stable base for airline planning.   Many air carriers today bet on future fuel prices to determine their operations. Such fluctuations are not normally associated with electric utilities. 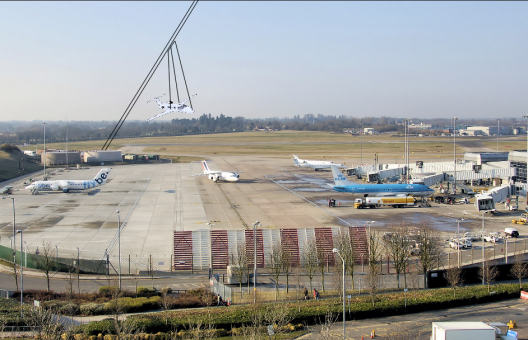 Takeoffs would begin with a slow-speed start, the launch airplane following a circular path as it is pulled up the lifting cable toward the tow plane. The circle becomes larger and faster as the airplane rises, eventually reaching 10 kilometers (6.2 miles or 32,000 feet) altitude and flying a shallow turn with a 5 -kilometer (3.11 mile) radius under the tow plane. When the launch plane is pointing in the right direction, it disengages from the lifting cable and begins its journey. Where a normal climb to altitude might take 20 minutes and consume 5,000 pounds of expensive jet fuel, with the example based on a typical 737 flight profile, Carpinelli projects that his system can get the same airplane to 41,000 feet in three minutes for about $650, with a much lower carbon footprint.

The launch airplane could carry less fuel, not needing power for the first part of the flight, could use smaller engines or electric motors to propel it towards its destination, and would be a great deal like a sailplane with a sustainer motor. The environmental benefits could be significant.

He also thinks his system could be safer than a normal takeoff, the “most dangerous part of a flight,” and that it will be quieter (the towplane being out of audible range) than normal airport operations. Batteries or reserve fuel in the towplane could bring it down safely if the grid failed, and parachutes on towlines would deploy to prevent large bundles of rope from landing on adjacent neighborhoods. The five-km circle around the hub would limit the effects of any major catastrophe with the system, unlike the random and unlimited circle that surrounds all current aerial operations.

His economic calculations show such a method would compare favorably with trucking and rail freight in moving large quantities of material.

He reports that his recent presentation before the VC (Venture Capital) Task Force was met with polite interest, but that the panel of investors said “it requires too much capital for VC funding”. They suggested I start with government grants, the military or strategic partners like Fedex. My revenue model was based on an electric air freight service for shipping commodities in remote areas. The system could deliver minerals, grains, timber or other bulk commodities cheaper than trucks. Remote areas have less crowded airspace and potentially large payloads. I used to work in the mining industry so that is one initial market that interests me. Air freight is a $200 billion industry and trucking is even larger, so there’s a big potential market for a more efficient system.”

An alternative business model may be, “to focus on tourism and suborbital transport as the initial markets. This requires even more capital to get started, but it is a unique product offering and might generate some more excitement than the air freight business. We could build a system for scenic tourist flights relatively cheaply. A chairlift to 8000 feet is a potentially cheap and profitable tourist attraction.” The latter would be an exciting start to a long downhill ski run.

Carpinelli will be attending the New Space Conference 2011 in Mountain View, California on July 30 to discuss the suborbital potential of his project.

For suborbital flight, he proposes a three-tier towing program that stacks several airplanes in orbit, each towing a segment of a much longer towline and that would be capable of pulling a craft to 100,000 feet. Launching spacecraft from this point would be an inexpensive alternative to other space tourism approaches such as Spaceship Two. It could also launch other “Hypersoar” craft that could take advantage of extreme altitudes and speeds for long haul supersonic transport.

Here, electrically-powered, unmanned craft would excel, with no atmospheric limitations that would reduce their climbing or loitering capabilities. As Carpinelli follows leads in funding for his ambitions, we will continue to follow his progress.

Thanks to Gaylord Olson for alerting your editor to this and the story of Nate Saint’s early use of the technique at a much smaller scale.