Calin Gologan had a gala week at AirVenture, speaking at the Electric Aircraft World Symposium to detail his Elektra One Green Flight Challenge entrant and to introduce his Elektra Two and Four two-seat and four-seat, respectively, electric aircraft.  He was awarded the Lindbergh Electric Aircraft Prize (LEAP) for the quietest electric aircraft by Erik Lindbergh, Charles’ grandson.

Saturday, July 30 saw Norbert Lorenzen, test pilot for PC-Aero and owner of a flight school near Landshut, Germany, take Elektra One for a spin around the Oshkosh airspace.  Note Molt Taylor’s Aerocar zipping by between the 15 and 18 second marks on the video.

On the ground, the airplane was dollied out for takeoff,“overseen” by the capable Howard Handelman, who also noted something that Gologan had confirmed to Brien Seeley, President of the CAFE Foundation.  The SolarWorld solar cells on the wings and flying tail were real, but they weren’t connected.  There is some concern that, as mounted, they did not enhance the airflow.  Whether they will be on the airplane and providing power will be a source of much interest for the Green Flight Challenge. 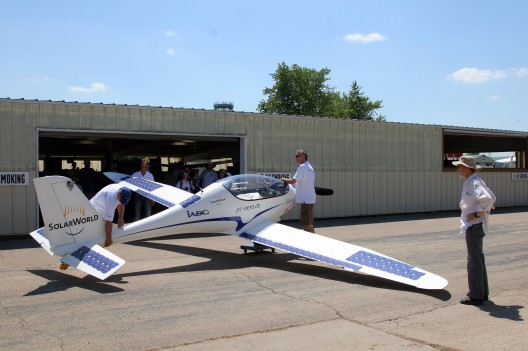 Elektra One being dollied out of non-solar hangar at AirVenture. Howard Handelman picked up starboard (right) wing tip after shot was taken. Photo courtesy PC-Aero and copyright by Shahn Sederberg

A new embellishment showed up on the side of Elektra One at Oshkosh – IABG, a central analysis and testing organization for the aeronautics industry and Ministry of Defense in Germany.  One would expect this level of monitoring and evaluation for such an advanced product.  This is the kind of detail Jane’s All the World’s Aircraft reporters look for on MIGs and Chinese prototypes – and you get it here free.  (Insert equivalent of smiley.)

PC-Aero’s solar hangar now has a new name – SunAirport, and its SolarWorld sponsor assists in Gologan’s goals of flying with zero CO2 emissions, using less energy and producing low noise at low operating costs.  According to Gologan, Elektra One flies on only six kilowatts per hour – equal to about 100 light bulbs.

In the meantime, in either the great minds running along the same paths truism, or the imitation is the sincerest form of flattery vein, Ford and SunPower announced a solar garage to complement the new Focus Electric.  The 2.5 kilowatt rooftop panels would offset the electricity needed to charge the car daily, adding up to about 3,000 kilowatt hours per year. 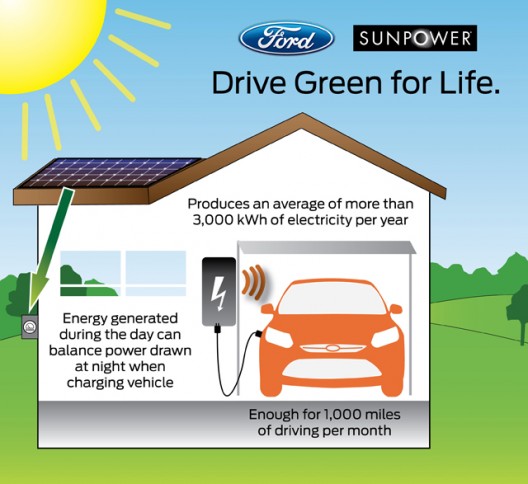 Ford and SunPower's promo for their "Drive Green for Life" program

Offered at a base price of “under $10,000” after federal tax credits, the garage solar panels should be a popular introduction to green energy for many car-driving households.  Ford and SunPower Corp. are promoting their “Drive Green for Life” program to incentivize sales of cars and panels.  According to SunPower President and CEO Tom Werner, “SunPower’s innovative partnership with Ford is a win-win for customers, providing a comprehensive sustainability program.”   Drivers can check up on their cars though the included residential monitoring system, “which includes the ability to track the performance of their solar system on the web or through an iPhone application,” according to the joint press release.

Couple that with Best Buy announcing sales of 240-volt home charging stations for the new Focus, and we see the advent of consumer-based expansion of off-grid solutions for future energy needs.  The fact that aircraft designers and their associates have been in the forefront of this adds the hope that other creative approaches will engender even more useful trends.

Thank you to Howard Handelman, who also spoke at AirVenture and to Dr. Birgit Weissenbach, the cordial and extremely helpful press liaison for PC-Aero, for their assistance with this entry.