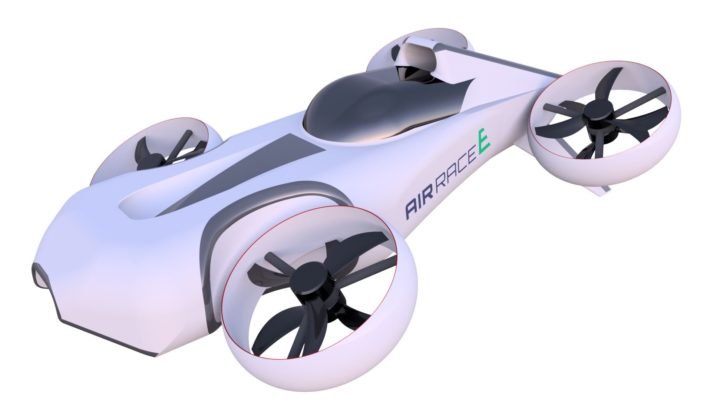 “The electric VTOL class is an entirely different category of aircraft altogether. Often referred as “flying cars”, this type or aircraft is at the forefront of electric technology in aerospace. Brace yourself for The World’s First Vertical Motorsport! This race format and its rules will be somewhat different than the airplane classes and will be revealed soon.”  Air Race E promotion.

Two possible contenders (mostly) ready to race come to our attention.  The first is the Alauda Airspeeder, shown here in its Mk. 3 version.

And by dint of the International Dateline, the craft’s most recent flight came to us the same day it was recorded.

One may question how open-rotor racing at high speed can be made safe.  Alauda alludes to Acronis Cloud Protection.  “The racing series, created by performance electric flying car manufacturer Alauda, will receive technical and commercial support from Acronis, with some of the services delivered by a global provider of cybersecurity solutions, Teknov8.”  (When your editor tried that link, it was shut down.)

In the meantime, Acronis will “ensure data security” for the revolutionary LiDAR and Machine Vision technology that will deliver close but safe racing through the creation of virtual force-fields around each racing craft.”  Pilots will receive real-time data analyzing battery and key systems performance.

Jan-Jaap Jager, the Board Advisor and Senior Vice President at Acronis, says, “Our proven, integrated approach to providing easy, efficient, reliable, and secure cyber protection for all data, applications, and systems, will help Airspeeder to enhance their performance on the air track and in the back office.

Alauda sees robot “Aviators’ taking the place of pilots.  These avatar aviators will “digitally receive remote inputs and mimic the movements of the human pilot on the ground.”  A step toward future crewed racing, digital virtual competition will at least keep the body count low.

For vehicles twitchy in all three axes and possessing a power-to-weight ratio than an F-15, according to Alauda, such safety considerations must remain paramount, especially for Vertical Class racing.

Another Vertical Class racer, Carcopter’s most unique feature is its hydrogen fuel cell power.  It drives six 35 kilowatt (47 horsepower) motors that can carry its single occupant at speeds up to 246 kilometers per hour (152 mph).  Because, according to the company, H2’s energy density is three times that of lithium batteries, the Carcopter can travel for 35 minutes on a “charge,” or over 80 miles.

Carcopter’s zero-emission platform and aerial environment mean it is good for the environment.  Compared to a “classic” formula one car which emits 256,000 tons of CO2 per season, there are emissions.  A Formula 1 car goes through 1,600 tires per car per season!

Alauda and Carcopter each have seemingly viable machines, but neither has an integrated plan to enable head-to-head racing in your editor’s opinion.  There needs to be an overseeing group such as Air Race E to put together rules and schedules before a truly meaningful series of events can take place.  Air Race E already has a designated class for vehicles like these, but with few competitors yet.

If races are as short as for the fixed-wing racers, Carcopter’s hydrogen range might not present an advantage, but would be of consequence in longer competitions.  Formula 1 cars have fuel tanks restricted to 100 kilograms (26 gallons) and may not refuel during a race.  Such restrictions in battery capacity would limit all participants equally in an air race.

Although Alauda and Carcopter have ambitious schedules and plans for racing, much remains to be sorted out.  In the meantime, other craft with similar configurations may provide fun and excitement at lower speeds.

Because the press seems to invariably evoke the memory of the Jetsons of Hanna-Barbera cartoon fame, the creator of this machine couldn’t resist assuming the name for his “flying car.”  The first video is of the first prototype

While the first outing saw the pilot controlling things by a radio control setup, the most recent version has a more robust carbon fiber and aluminum frame, automatic hover and recovery for pilot safety, and a ballistic parachute if all else fails.  Lidar sensors and triply redundant controls help avoid obstacles and ensure safety.  Jetson claims the loss of any one of the eight powerplants will not interfere with continued safe flight.

Fairly light for an eVTOL multi-rotor, the Jetson weighs only 90 kilograms (198 pounds) and can carry an 85-kilogram (187-pound) pilot.  Flight speed is limited to ultralight levels at a top of 63 mph and flight time is limited to 20 minutes.  The eight motors can put out a maximum of 88 kilowatts.

One oddity with similar performance might be the CycloRotor, what in boats would be a side-wheeler.

As noted, the 1923 patent did not work out until now because of material limitations.  The current version has elicited over a million views on YouTube since its introductory video a few days ago.  We will go into further exploration of this concept in the near future.  Its German designers seem to have grand ambitions for the concept.

Whether rotary-wing eRacers will be able to compete with their fixed-wing counterparts remains to be seen.  In the meantime, they and their sporting variants can offer some advantages for those looking for a unique entrée to flight.