106 years after Louis Bleriot took off into a foggy morning and pointed the nose of his Model XI toward the Dover coast, Airbus celebrates the event with an anniversary flight of their e-Fan prototype,  now sporting a bigger, more powerful battery pack, lightened airframe and lighter electrical components. 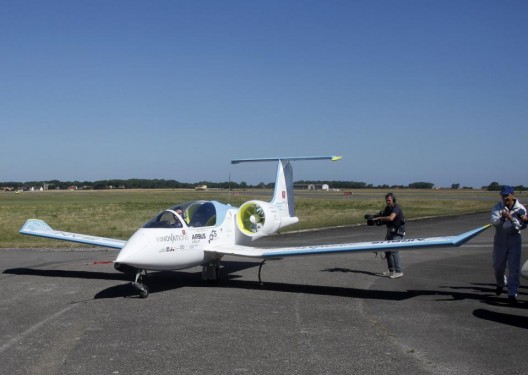 Their press release carefully avoids mentioning Hugues Duval’s flight the day before, apparently done to upstage the e-Fan’s trip.  It does claim credit for making the first cross-channel flight in a “twin-engine electric plane,” even though Duval’s Cri-Cri was powered by twin Electravia motors.

“At 11am on a calm, sunny summer morning, the Airbus E-Fan touched down in Calais to enter its name in the record books. The all-electric plane became the first twin-engine electric plane taking off by its own power to negotiate the English Channel, more than 100 years after Louis Blériot had first made the intrepid journey.

“Travelling in the opposite direction to the pioneering Frenchman and powered by lithium-ion batteries, the E-Fan took off from Lydd on the English south coast, completing the 74 kilometre flight east to Calais, France, in around 37 minutes. Flown by test pilot Didier Esteyne, the all-electric plane weighs around 600 kilogrammes and travelled at an altitude of about 1000 metres [3500 feet].”

Bleriot’s three-cylinder Anzani clattered out about 25 kilowatts (33.5 horsepower) to its 2.08-meter (6.82-foot) diameter propeller.  Top speed of the Bleriot was 75.6 kilometers per hour (40.8 mph), which accounted for the 36 minute flight required to cross the 22-mile channel.

A bit sleeker and speedier than the best aeronautical science could manage a century ago, the e-Fan’s twin electric motors put out 60 kilowatts (80.4 hp.) through its ducted fans.  Its maximum speed of 220 km/hr. (119 mph) will enable a shorter flight time and its sleekly faired cockpit will provide a comfort level Louis Bleriot would envy. 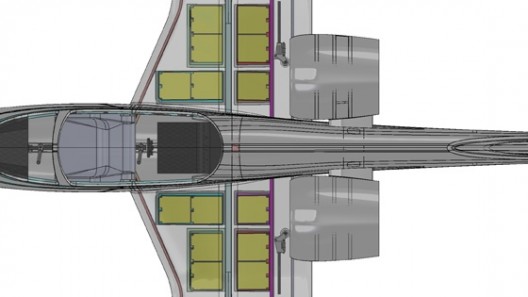 To ensure sufficient energy levels for the flight, Airbus has created a heavier, but more energy-dense battery package.  They’ve compensated for the added battery weight by reducing aircraft structural weight and using much lighter electrical components in some instances.  The airplane’s original battery package weighed 137 kilograms (301.4 pounds), while the new system adds 30 kilograms (66 pounds) for a new total of 367.4 pounds.

The original pack was good for 30 minutes of flight, while the new extends that to 53 minutes, more than enough for the jump from Lydd, a few miles south of Dover, Bleriot’s original destination from Calais.  The southerly location required the e-Fan to fly due east to Calais, where Bleriot’s route had been more north by northwest.

Francis Deborde is CEO of Aero Composites Saintonge, builders of the e-Fan prototype.  He reports E-Fan’s total weight has been reduced by some 38 kilograms (83.6 pounds) in countering the increased battery weight.  Part of that came from removing the electric motor system that drove the landing gear for taxiing.  A significant amount came from redesigning the motor controllers, originally industrial units totaling 12 kilograms (26.4 pounds) and dropping their weight to 1.5 kilograms (3.3 pounds) each.  The original controllers sat behind the pilot, requiring heavy cabling to the motors: the new units “are integrated into each of the E-Fan electrical engines’ shrouds, with an aerodynamic fairing on the exterior and a heat-dissipating radiator on the interior.”

To appreciate the heavy hitters involved with Airbus projects like this, consider that the battery array came from a collaboration between CEA Tech (the French Atomic Energy and Alternative Energy Commission’s technology research unit), Airbus Defense and Space, and Airbus Group Innovations.

Airbus Airbus Group has begun development of the E-Fan’s Pau, France assembly site, which it will lease to its wholly-owned Voltair subsidiary responsible for the electric aircraft’s development, production, sales, delivery and customer support.

Plant construction is expected to begin in 2016, and the swoopy-looking facility will begin aircraft production the following year, expected to be only 10 e-Fans per year initially.  This small initial offering will enable Airbus to evaluate interest in the machine and plan future production of the 2.0 two-seater and 4.0 four-seater.