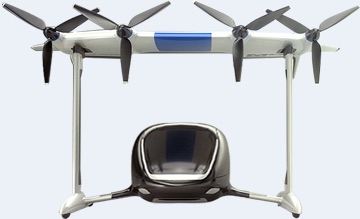 Airspace X decries the thought that “Traffic is taking over our lives.”  It lists three concerns: the 42 hours urban commuters sit in traffic per year; the 1.9 billion gallons of fuel wasted due to road congestion; and the $1,400 wasted per driver per year due to traffic.  Its solution, an electrically-powered four-seat commuter vehicle called MOBI.  The e-VTOL (electric vertical takeoff and landing) machine, introduced at the Uber Elevate Summit on April 27, lays claim to being able to fly its passenger at rates equal to an Uber Black ride.

According to NBC News, Uber Black “town car” style trips are usually longer than “standard” rides, in a shortlist of approved vehicles – the Audi Q7, BMW X5, Cadillac XTS, Porsche Panamera, or any Bentley or Rolls Royce that is “black on black” – black exterior with a black leather interior.  Riders pay a high premium, though – $3.55 per mile, compared to the next level, Uber X, at $0.90 per mile.  Your editor has experienced two Uber rides in Priuses at much lower prices, but significantly nicer than his daily driver, a 1995 Subaru with 273,000 miles on it.  Luxury truly is a comparative thing.

Airspace X is an outgrowth of Detroit Aircraft Corp. and is an air mobility company “that will deliver affordable, on-demand air travel, connecting cities, suburbs, and surrounding airports around the world.  Detroit has grown from a company that tried to bring aircraft manufacturing to the city, developed a series of drones for first responders and commercial users, and has now brought forth a different aerial mobility (MOBi) solution. 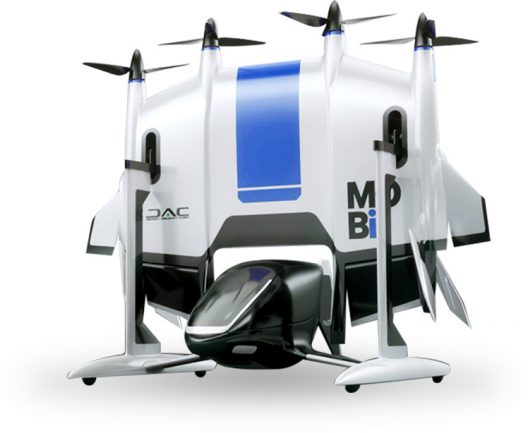 Jon Rimanelli, founder and CEO of AirspaceX, explains,“With MOBi, we will deliver a new experience in air transit and point-to-point air mobility. It will be a clean, quiet, stabilized flight experience that is accessible and affordable to the masses.”

Somewhat like the Airbus Pop.Up!, MOBi consists of three modules: flight, payload, and ground.  Like Pop.Up!, MOBi’s passengers ride in an unpowered payload module, which can either ride around on a separately powered ground module when fighting it out with city traffic.  An electric motor-powered flight module twirls four propellers to allow VTOL flight – but notice the singular power plant.  It will have to be powerful enough to lift the weight of the flight vehicle including the 400 kilogram (880 pound) payload. 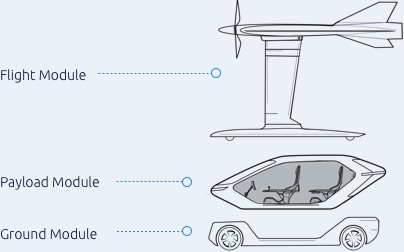 The company claims the single electric motor will produce zero carbon emissions and be “significantly quieter” than helicopters and airplanes.  That will doubtless require the four propellers to turn at reasonably low rpms.

By taking advantage of uncluttered skyways and straight-line flight, MOBi can cut an hour off that for an equivalent ground trip. People who can afford an Uber Black ride tend to value their time highly, and will see such trips as real bargains.  At the rates promised, even those of more humble means might take an occasional sky taxi.