Your editor took a trip to Tehachapi, once home of the infamous California Women’s’ Correctional Institution, mentioned in no less than three 1940’s films noirs.  (It’s now a gray-bar hotel for bad boys, not bad girls.)   Lesser offenses were in mind, though, since Labor Day weekend has been the time for 31 meetings of the Experimental Soaring Association’s Western Workshop.  The group, devoted to improving sailplanes and testing the limits of soaring technology, has been in the forefront of many significant developments, and its members include many record holders and aerodynamics experts.

This year’s convocation included talks on birds, dragonflies (the Libelle sailplane), and even a demonstration of Aerovironment’s spy hummingbird, a camera-toting drone no larger than a 90-percentile member of the Trochilidae family. 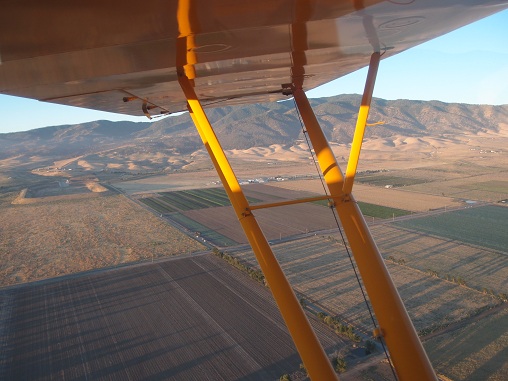 Mountain Valley Airport, site of the ESA Western Workshop, from the back seat of Jeff Byard’s Legend Cub

Phil Barnes kicked off the Saturday talks, showing his incredible computer simulations of the dynamic soaring flight of the Albatross, which included an impassioned plea to help preserve this magnificent bird.  He noted that “gyres” of plastic slurry distributed in oceans throughout the world pollute the food sources for the Albatross and its offspring, leading to widespread species destruction.  He followed up with other highlights from his web site, finishing with a detailed and improved version of his presentation on regenerative flight, which includes some rather astonishing conclusions on the efficiency such machines can achieve.  The blog will have a longer follow up on this exiting presentation.

In a presentation that complements Barnes’ theories, Al Bowers spoke on bird flight and the lift distribution of wings.  Some inking of his talk can be enjoyed in this TED video (Technology Entertainment Design – an amalgam of science and Hollywood production values).  Bowers is director of the NASA Dryden Flight Test Center at Edwards Air Force Base, so can speak authoritatively on aerodynamics.

Cam Martin, an archivist at NASA Dryden, extolled the history, virtues and beauty of the Glasflugel Libelle (German for Dragonfly) sailplane, including the unique designation approach, which makes a 301 an earlier model than a 201.  Michael Reid combined a slide show of his methodical improvements to his Libelle with an outdoor show-and-tell of the actual craft, which demonstrated the care and attention he has lavished on making his craft a competitive racing sailplane.  His Libelle 201b has taken Reid on multiple flights over 500 kilometers and above 20,000 feet.   He has earned his diamond badge in the airplane and currently holds two California State soaring records for the sports class. 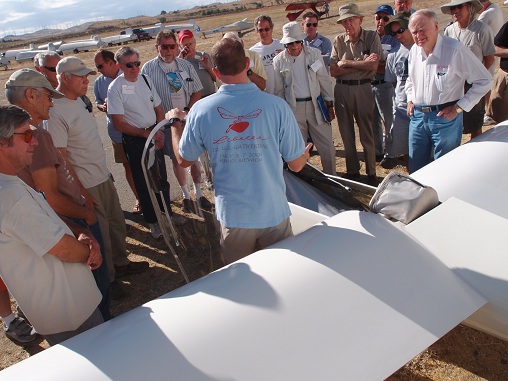 Two high fliers were highlighted, one by a friend and one speaking in person on some amazing flights.  Bob Harris was represented by a friend who told of Harris’ topping the world altitude record for sailplanes in his February 17, 1986 flight to 49,009 feet in an unpressurized sailplane without a pressure suit.  Unfortunately, the record did not become “official” because of possible jurisdictional jealousy between Harris (who flew with permission over Edwards Air Force Base} and those who oversee nearby federal airspace. Harris had to fight the FAA for several years for not abiding by Federal Air Regulations.  The story was one of  literally high adventure followed by that sinking feeling one gets when having to contend with a government official seeking compliance with all rules at all times.

ESA was originally the Homebuilt Sailplane Association, and two members kept the tradition alive.  Les King asked, “How Far Will Watts Take Us?” and proceeded to answer that with a look at available options for homebuilders who want an electric sailplane.  His review of motors, controllers, and batteries showed the promise and limitations of current technology.   Murry Rozansky, also treasurer for the ESA, gave his ideas for a “plank” sailplane, showing the differences between straight wing and swept wing tailless airplanes, and previewing a standard-class or bigger sailplane with minimal tail surfaces and self-launching capabilities.  He even alluded tothe possibilities for extruding wing panels, something he talked about at last year’s workshop.

“Pure” sailplanes need towplanes for launches, and John Ashford showed efforts to develop liquid-cooled automobile engines, including V-6 Fords and LZ-1 Corvette engines for such operations.  Liquid cooling prevents the shock cooling that sometimes occurs in an air-cooled engine that first runs at full throttle dragging a glider into the air, then pretty immediately goes to full idle for a rapid descent back to the field.  These American engines on Piper Pawnees give excellent performance and a better fuel burn than their aircraft engine equivalents.  He ended with a Subaru-powered, high-wing craft with Polish Wilga-like gear for towing lighter craft.

On the historical side, Jeff Byard, whose hangar houses the meetings every year, talked about early kit sailplanes, such as the Schweizer 1-26, and homebuilt sailplanes that could compete with professionally built craft until the advent of fiberglass craft.  He noted the simplicity of instrumentation in earlier sailplanes and the increasing sophistication which has become the norm for competition today.

On the historically literate side, Simine Short discussed her new book, Locomotive to Aeromotive: Octave Chanute and the Transportation Revolution.  Her presentation gave an overview of Chanute’s engineering genius, including early railway innovations and wood preservation methods to make railway ties last longer.  His enthusiasm for aircraft led him to design his own hang glider and to become a mentor to the Wright Brothers.  Ms. Short noted that the hang glider design was stable enough to allow modern versions to be built and flown.  From my reading so far, I can highly recommend this book, with its clear depiction of 19th century engineering techniques and early approaches to aeronautics.

Jack Norris, mission director for the Voyager flight, talked about the theories that he expands on in his book, Propellers: The First and Final Explanation.  He sold me a copy four years ago, and its extreme typography and design may look like a ransom note gone awry at first, but the ideas become clearer with every reading, and one gains some valuable insights into what makes a propeller work, and why we’ve been doing them wrong for many years.  Several designers, following his precepts, have been achieving considerable gains in efficiency over “traditional” approaches.

Greg Cole, head of Windward Performance, told of progress on Perlan 2, the airplane at the heart of the Perlan Project, destined to attempt a world altitude record of 90,000 feet in 2013, if current plans can be maintained.  Greg is also working on the Goshawk, a Light Sport Aircraft motorglider powered by an HKS-700 two-cylinder engine and capable of Green Flight Challenge fuel economy.  His Duckhawk, a 15-meter (49.2 feet) sailplane uses a Sparrowhawk fuselage and promises to be the highest performing standard-class sailplane in the world – if Greg has his way about it.  Windward is producing the prototype of Joe Ben Bevirt’s Monarch, a vertical takeoff and landing commuter to be powered by eight Joby JM-1 motors.

The Sunday session ended with a hum.  Karl Klingbiel and Matt Keenon of AeroVironment showed off their highly sophisticated nano hummingbird drone, something that encapsulated the theories Phil Barnes and Al Bowers had discussed on Saturday in a small, highly maneuverable device (creature?).  Following the designers’ explication of what it took to gain simple hovering flight and to move as necessary to guide a sternum-mounted camera to its optimum viewing spot, the sight of the realistic-looking bird hovering over the audience and zooming from one person to another was a revelation not easily experienced in mere videos of the creation.  The fact that such a “creature” can video and audio record while in flight, or leave a “bug” to eavesdrop on a likely suspect makes it a potentially useful tool for national security, but also has the cloud of potential misuse that such inventions invariably seem to have hovering over them.

A tragedy on Sunday morning, the crash of a Cessna T210 in the high density altitude above the airport, started a fire that prevented flying that afternoon as a temporary flight restriction (TFR) took effect.  As the fire grew (it was only contained Wednesday), it forced not only the evacuation of 600 families, but the early closure of the evening’s potluck dinner and the cancellation of Gary Osaba’s presentation on his many record flights. 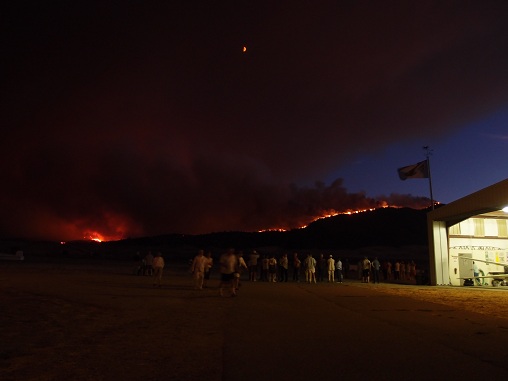 The efforts of 2,000 firefighters, a veritable air force of spotter planes, Sikorsky Skycranes, and even a borate-dropping DC-10 showed both the enormity of the fire and the diligence of the brave souls who fought what grew to a 17,000 acre blaze.   With the half moon glowing softly through the billowing smoke, it was a memorable but sad end to a memorable and inspirational gathering.

(Note: Thank you to Colin Rush for correcting your editor’s incorrect French plurals in the first paragraph.)

(Note: Amended on July 26, 2015 to clarify part of the story about Bob Harris and his altitude “record.”)