Alta Devices has been trading places with the National Renewable Energy Laboratories (NREL) in holding world record efficiencies for single- and dual-junction solar cells at one sun (not concentrated).  Their gallium-arsenide technology includes a layer of indium gallium phosphide (InGaPh), which the firm says utilizes photons more efficiently.

According to Alta Devices, “Alta has achieved this breakthrough by modifying its basic ‘single-junction’ gallium arsenide (GaAs) material. The company’s dual junction technology builds on the basic GaAs approach, but implements a second junction (or layer) with Indium Gallium Phosphide (InGaP). Because InGaP uses high-energy photons more efficiently, the new dual-junction cell generates more electricity from the same amount of light than a single-junction device. With this breakthrough, Alta currently holds both the dual-junction and single-junction records at 31.6% and 28.8%, respectively.” 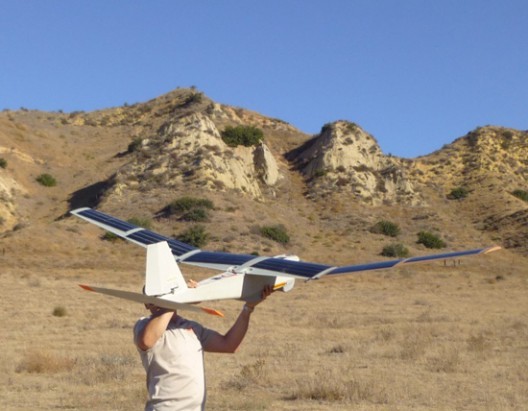 Alta claims, that for a typical HALE (high altitude long endurance) UAV aircraft, their solar material requires less than half of the surface area and weighs one-fourth as much while providing the same amount of power as competing thin film technologies.  Alta explains this greater “payload functionality” can be used to obtain higher aircraft speeds or longer range.  (These numbers seem a bit optimistic to your editor, as the 31-percent efficiency is 43 to 31 percent greater than the 22 or 24 percent for the cells used on Solar Impulse or Eric Raymond’s SunSeekers.

Regardless, these numbers work well in unpiloted aerial vehicles (UAVs), with the company showing an Aerovironment RQ-12A Puma decked out in Alta Devices thin-film solar cells.

Roy Minson, AeroVironment senior vice president and general manager, Unmanned Aircraft Systems (UAS), reported following the first successful tests in 2013 that past solar solutions for powering small UAS were either too heavy or did not produce enough power for long-range flight – or both.  “However, the solar Puma AE technology can produce enough power, while adding negligible weight, so that endurance is no longer an issue for most customer missions.”  Initial tests extended the endurance of the Puma from about 2-1/2 hours on batteries alone to a demonstrated nine hours, 11 minutes and 45 seconds. 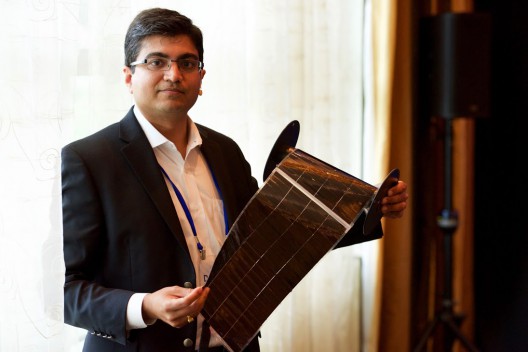 Aarohi Vijh presented this material to the First Annual Sustainable Aviation Symposium in May.  He works on application analysis and product development for aerospace markets at Alta Devices.  His dissertation on his EE/PhD. resulted in the development of lightweight solar cells and modules for the Air Force Research Lab, Kirtland.  He’s since experimented with radio-controlled aircraft carrying cameras and amateur radio equipment “well before drones became popular.”  A private pilot, he currently flies out of the Reid-Hillview Airport.

He demonstrated the flexibility of Alta’s solar cells, able to conform to a 2 centimeter (0.8 inch) radius of curvature, useful in covering airfoils or on automobile bodies, as noted below.

Part of the Hanergy Holding Group, Ltd., a Chinese company, Alta Devices shares its solar film on a series of four solar-powered cars being developed in China.  From Hanergy’s press release:

“According to Dr. Gao Weimin, Vice President of Hanergy Holding Group and CEO of its Solar Vehicle Business Division, the four full solar power vehicles are integrated with flexible GaAs thin-film solar cells, covering 3.5 to 7.5 square meters respectively. With five to six hours of sunlight, the thin-film solar cells on the vehicle are able to generate eight to ten kilowatt-hours of power a day, allowing it to travel about 80 km, equivalent to over 20,000 km annually, which satisfies the need of driving in a city under normal circumstances. With this disruptive innovation, the full solar power vehicles no longer need to rely on charging posts like traditional electric vehicles. 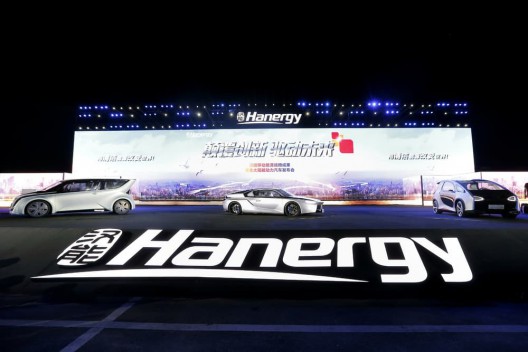 “Under the mode of routine-day use, the vehicles are able to charge themselves with clean solar energy while traveling, making “zero charging” possible. It alters our inherent concept of ‘distance per charge’ of an electric vehicle. In the cases of weak sunlight or long-distance travel, the lithium batteries equipped in the vehicles can also get power from charging posts, enabling them to travel a maximum of 350 km per charge.”

The practical applications of this technology could be significant in developing longer-range electric aircraft.  The larger-scale automotive use gives hope that the economies of scale will bring costs down for all users.  The possibilities seem boundless.