Stephen Boutenko, founder of Alternair, LLC and Karl Young, founder of Extreme Capacitors have found common cause in analyzing how best to make an electric Light Sport Aircraft (LSA) a possibility.   Alternair’s Amp LSA was featured in a blog entry last year, and Karl Young’s work with ultracapacitors was the subject of his presentation at this year’s Electric Aircraft Symposium.

Alternair has recently established a temporary design department in Prescott, Arizona (in association with Embry Riddle Aeronautical University) and is moving his manufacturing facility to Ashland, Oregon, where he hopes to begin production of the highly-sophisticated Amp. 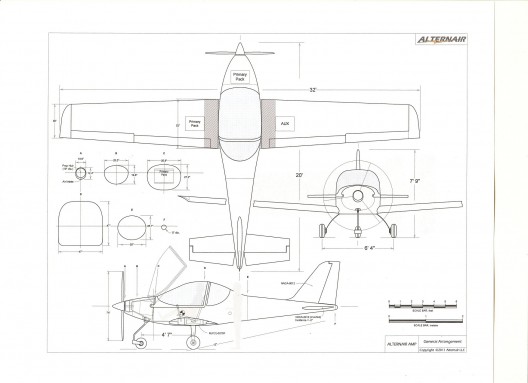 Although Amp will be developed around existing lithium-polymer battery technology, Young reports that his creation of high power/high energy ultracapacitors has demonstrated, “Around 0.9 mega Joules (250 Watt-hours per kilogram) in the lab,” with a goal of, “5 mega Joules (1,400 Wh/kg) for sport aviation.”  Funding will spur further progress.  Young explains, “We’ve already found ways to
improve our existing design,” and he predicts success in reaching his energy storage goals.

For comparison, commercially-available lithium-polymer batteries are capable of 130-200 Wh/kg.

Beyond that, he and Stephan, “Are planning an electric vehicle (EV) charging infrastructure for airports with paved runways (> 5,000) using the X-Caps™.  It’d be for electric airplanes, utility vehicles, energy trucks (fuel trucks) and EVs in the parking lot.”  Applying for funding from the U. S. Department of Energy, they found they were up against significant competition, and are turning to private investors on the OnGreen.com web site, a place for entrepreneurs with promising technological concepts to seek venture capital.

Young sees a larger role for his technology.  “It’ll help to minimize stress to the grid, and become part of the smart grid in distributed energy storage for national security.”  This would be similar to his vision for using X-Caps in, “Electric vehicle charging stations that would help utilities to level loads and shave the power demand peaks that would come with widespread EV adoption.  With enough power density in a super capacitor, a driver could go 200 to 300 miles, and recharge in less than five minutes by tapping into a large super capacitor in a parking garage.

When questioned about the possible use of Young’s super capacitors in the Amp, Boutenko replied, “Supercaps may be possible, but which one comes first -the electric airplane or the batteries? I don’t know if anyone can truly answer that!  Karl has been helping us as one of the Alternair team members. He might be what we need to get new investors, as well as make progress in both the electrical and the mechanical areas.”

Alternair’s Amp has the look and feel of an LSA, but a series of electronic technologies that take it out of the mainstream.  Its lithium-polymer batteries would be monitored through an IMAS (Integrated Modular Avionics Server – much like that used on modern airliners) which will host the AHM (Aircraft Health Management) application.  Such systems allow “e-enabling” or monitoring and prognostication of aircraft and systems’ needs.  Pilots and mechanics would have history and trends for everything on the plane, and could plan maintenance and replacement based on that data.  There is even some capability for rerouting signals though a neural-like network to “repair” at least temporarily a non-functioning system.

The airplane will be sold with a portable charger that will be CHAdemMO compatible, allowing it to be charged at any standard120, 220 or 480 Volt outlet or J17772 charging station with its standard plug-in receptacle.

(According to the association’s web site, “CHAdeMO” is an abbreviation of “CHArge de MOve”, equivalent to “charge for moving”, and is a pun for “O cha demo ikaga desuka” in Japanese, meaning “Let’s have a tea while charging” in English.  CHAdeMO is prevalent in Japan and parts of Europe now, with charging stations being installed on the U. S. west coast.)

If Karl Young’s X-Caps and Stephan Boutenko’s Amp were being charged from solar or wind power, so much the better!