Ampaire, a tech startup based in California, announces, “Our mission is to be the world’s most trusted developer of practical, compelling electric aircraft from short-haul cargo to supersonic passenger transport.”  They also claim to have demonstrated the “highest-capacity electric aircraft ever flown” last Thursday, June 5th at Camarillo, California.  The company hopes to “have regular commercial service for passengers and cargo as soon as 2021.”

Using a Cessna 337 Skymaster was a canny move for the young firm, giving them ample weight-carrying ability to have a petrol engine in the nose and a dual-Emrax motor system behind the cabin and between the twin tail booms. The push-pull arrangement adds to engine-out safety with no assymetrical thrust as on a conventional light twin.  The Skymaster’s six-passenger cabin will enable profitable flights for charter work.  A standard 337 has an empty weight of 2,655 pounds and a payload of 1,745 pounds for a gross weight of 4,400 pounds.

With four to six passengers, including a pilot, there should be ample ability to carry a “small battery pack” noted by Ampaire, although it looks fairly substantial in the company’s rendering.  The hybrid configuration will enable fairly long flights and ample reserves, especially comforting over water routes. 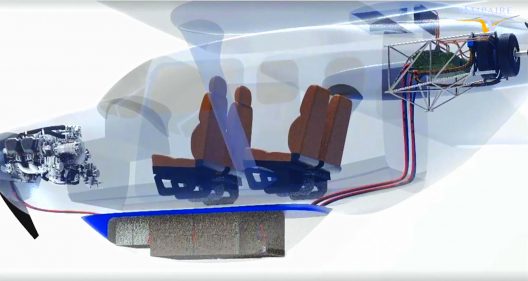 And that’s what Ampaire is counting on in Hawaii, Puerto Rico, and Scotland and other locales, among no less than 14 small airlines signed up to use Ampaire’s hybrid drive system.  Mokulele Airlines in Hawaii will start with Cessna 337 test flights and eventually expand to Cessna Caravan conversions. A Scottish airline based on the Isle of Skye (how appropriate) will work with Ampaire conversions of its DeHavilland Twin Otters, and  will collaborate with Vieques Air Link, a regional airline in Puerto Rico.  AIN online reports that, “Combined, Ampaire has signed 16 letters of interest with 15 other airlines across the world.”

Kevin Noertker, CEO of Ampaire, sees a bright future.  “Imagine that in just a few years you will be able to buy a ticket for a flight that is clean, quiet and inexpensive. Ampaire is proud to lead the aviation industry in transportation electrification, and we recognize the importance of electric aviation for climate change and community connectivity.”

Accelerators are funding operations encouraging new technology, and two of the many accelerators are enthused about last week’s first flight.  Matt Petersen, CEO of the Los Angeles Cleantech Incubator (LACI), says, “Ampaire and their Ampaire 337 flight test program further proves that Los Angeles is a cleantech hub that attracts investment and game-changing innovation for climate solutions.” Van Espahbodi, Co-Founder and Managing Director of Starburst Accelerator adds, “Aircraft are a significant contributor to both local and global emissions. Electric and hybrid-electric aircraft will reduce GHG emissions and air pollution even as more and more goods and people fly.”

With so many small airlines to work with and so many potential testbeds, Ampaire will be well prepared by the time it flies its own design, the sleek Headwind.