Chip Yates, already famous for his high-speed motorcycle racing with eight world records, four national records, and a world record for the Pikes Peak International Hill Climb among others, wants to make aviation history with a flight across the Atlantic, emulating Charles Lindbergh’s 1927 crossing – but this time with an electric airplane.  Even more exciting, the voyage is planned to include inflight recharging of the airplane.

For starters, Yates’ team, composed of aerospace engineers and energy specialists, has purchased a Rutan Long-EZ, removed its gas-burning powerplant, and is converting the airplane to electric power, which they might adapt from Yates’ racing motorcycle, claimed to be the world’s most powerful road-racing electric superbike.  That unit puts out 258 horsepower and 400 foot-pounds of torque.

In its new configuration, the EZ will become the Long-ESA for the Electric Speed and Altitude records it will attempt later in 2012.

Just notching the records for electric flight is just the beginning for Chip’s ambitious ideas for electric flight.  He wants to match Lindbergh’s 1927 Orteig Prize winning trip from New York to Paris, but recognizes that battery power doesn’t allow for that range yet.

He notes that his racing bike’s $40,000 battery pack was “cutting edge,” and that the 108 pouch cells held 453.6 Volts and could sustain 600 Amp current draws – 12.4 killowatt hours in 200 pounds.  He explains that’s nearly three times the stored energy of a Prius, but laments that this is nothing compared to gasoline’s energy density of 12,000 Watt-hours per kilogram.  His cells were 140 Wh/Kg, 86 times less than gasoline.

The batteries got results, but not at a desired level.  Chip explains, “While they allowed us to captivate the world with our gasoline bike equaling performance demonstrations, we could only match the gassers for 6-7 laps (12 with our patented front wheel KERS system) around a typical racetrack. The performance matching was great, the range was terrible, and this was a no-holds-barred $250,000 motorcycle built by aerospace engineers.” 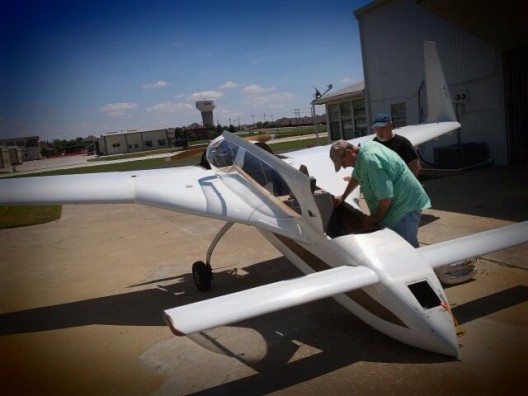 Long-EZ N158TG gets a thorough inspection prior to its purchase. Photo, Flight of the Century

He’s happier with his electric motor, which was 92.5-percent efficient in the bike’s operating ranges – “the radiators on our superbike never even got warm.”  Considering the most exotic Formula 1 racing engines are 35-percent efficient, the motor gets a little back for electric power, making electric power only 32 times worse than their gas-powered equivalents at the system level. 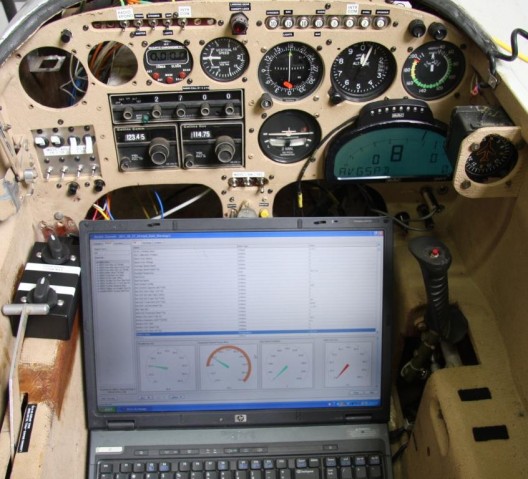 Monitoring gear added to Long-ESA cockpit. Photo, The Flight of the Century

Looking at current battery technology, Chip finds many disadvantages, but has decided to press on regardless.  “Advancements in battery technology are happening daily and at an impressive rate. Panasonic claims 245 Wh/Kg from their NCR18650A cell; start-ups like Envia have claimed up to 400 Wh/Kg (although only at lower power levels) and primary lithium cells (non-rechargeable, also low output amperages) can be found at 500 Wh/Kg and even higher for military use (if you don’t mind spontaneous fires and ITAR (intenational Traffic in Arms Regulations) inspections, 1000 Wh/Kg is possible but not rechargeable and not suitable for vehicle use due to very low current outputs). We have ongoing discussions directly with the laboratories of top lithium-ion battery companies and they report 300 Wh/Kg is working in the lab but currently doesn’t allow enough recharge cycles to be acceptable to consumers, while densities over 400 Wh/Kg are also possible but unconscionably expensive and can only be recharged a few times. So we’re not waiting around for batteries to catch up with fossil fuels. We’re working around the issue with a creative and exciting solution that is going to change the face of aviation by making it green and exciting…and soon!” 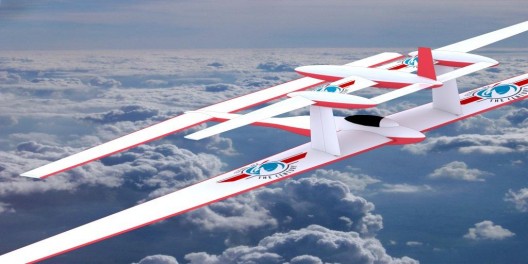 Docking of battery-carrying UAV with piloted record-attempt airplane. Illustration, The Flight of the Century

Taxi tests will start soon, with first flights of the Long-ESA slated for July.  The airplane will use a novel battery ejection system to increase its range. ” This all-electric plane will also serve as our flying testbed for our UAV battery pack tethering and docking technology as well as our Jettison & Balance System (“JBS”) battery pack shuttling technology and software development, which is where we have a number of battery packs in a pod below the plane, and as each is depleted, it is jettisoned from the pod and lands at a ground-based collection station via GPS guided parachute – this technique basically doubles the range of an electric airplane through continuous weight reduction as packs are depleted and dropped. The Long-ESA will help us rapidly develop these critical pieces to long-range flight.” 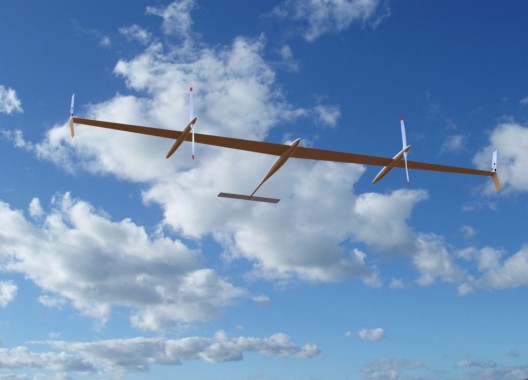 Projected image of Chip Yates' trans-Atlantic cruiser. Illustration, The Flight of the Century

The Atlantic Flight, planned for 2014, has a further enhancement, inflight battery pack swapping by unmanned aerial vehicles (UAVs) that will piggyback onto the host airplane and provide power for up to five stages of the journey.  This patent-pending Infinite Range Electric Flight (IREF) “refueling” technique will require a dexterous touch to coordinate linkups, and intense planning and coordination to pull off.

The team is working on the logistics of that process, using NASA’s OTIS Trajectory Optimization System for navigation, and evaluating the benefits and disadvantages of carrying different-sized battery packs.  Facing certification, aerodynamic, and systems issues will probably stress the Yates team for the runup to their planned adventure.  Chip’s web site and blog reflect on the many questions to be answered, and include the ingenious way in which UAVs will be launched to support the trans-Atlantic attempt.

One of the more wonderful challenges may be for Yates himself – obtaining a pilot’s license so he can be the one to fly the Atlantic!

(Editor’s Note: Thank you to Francois Besse, the editor and publisher of Piloter Magazine, for the heads up on this story.  Piloter is a monthly compilation of great and well-researched material on private flight.)