Gizmag apparently beat everybody to this story, with even Popular Science quoting from the online gadget hunter’s web site.

They report that in mid-August 2011, Pascal Chretien piloted his creation, a coaxial rotor, twin Lynch-motored helicopter that he built for Solution F, a Swiss racing engine development firm.  He performed the flight “in the presence of a court appointed witness,” according to a press release from Lithium Balance, the firm that supplied the battery management system (BMS) for and acted as consultants to the project.  The “first” Chretien claims is a carefully parsed one, an “untethered, fully electric manned helicopter flight in a prototype machine.”  The fact that he designed and built a unique machine and flew it in a 12 month span makes the two minute, 10 second flight all the more remarkable.  Solution F asked for a 10 to 12 minute flight, so more news will be coming, undoubtedly. 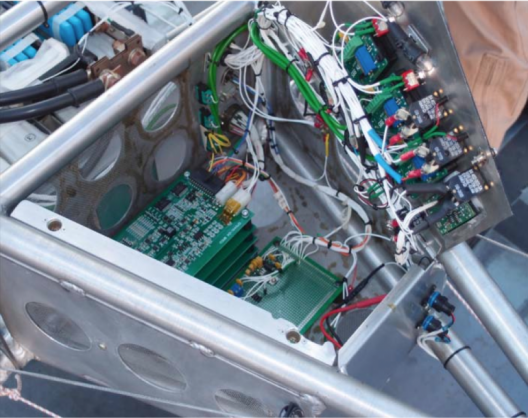 Battery management system - the most complex part of the helicopter

As Lithium Balance notes, “With degrees in Electronics and Aeronautical Engineering along with a commercial pilot’s license, Pascal had all the ingredients except one – battery systems expertise,” which the firm was happy to supply.  They used Kokam pouch-type lithium-polymer batteries with their BMS monitoring and controlling charging and discharging.

The mechanical parts were more to Chretien’s liking, with his use of welded 7020 aluminum tubing for the frame (a choice over the longer development time for composites), coaxial blades to simplify controls and eliminate the need for a tail rotor (which would have drained power from the main rotors), and a combination of varying the speed of the two rotors to give yaw control, and using weight shift by the pilot for pitch and roll controls.  The designer even built a “pendular” simulator on which he could practice control movement and body control before actually attempting flight on his machine.

“Ultra-lightweight inverters” from Kruspan control the Lynch brushed motors and a simple pulley system supplies power to the rotors.  The light weight and simplicity of the design undoubtedly helped Chretien achieve his initial goal.

As Lithium Balance explains, “As much as possible was simulated and tested using CAE (computer aided engineering) before being built and Kokam had to supply video evidence of the pack running at 5C continuously without overheating, after all as Pascal said ‘I don’t want to be a barbecued frog!’” 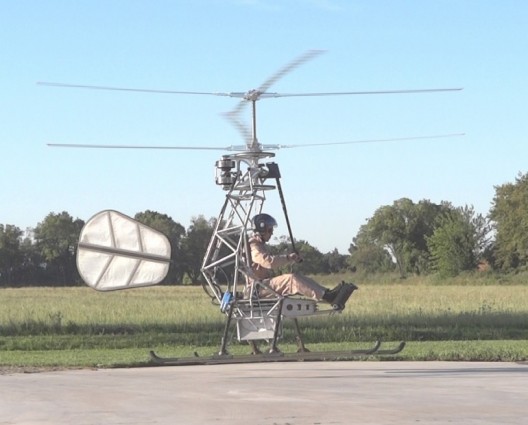 Gizmag expanded on the exothermic exigencies of the power source.  “The rechargeable battery cells are Lithium ion polymer pouch cells, with an energy density of 160 Watt-hours per kg. Although reasonably lightweight, these cells presented probably the biggest danger to Chretien in the test flight phase. As he puts it: ‘The infamous thermal instability of lithium/cobalt chemistry does not leave room for error… It is important to take it slowly, if I don’t want to wreck tens of thousands of Euros worth of hardware; but also, in case of crash I stand good chances to end up in kebab form, as LiPo batteries are notoriously infamous for bursting to flames once distorted. The chemical reaction is violently exothermic. This machine looks like a toy, and flies like a toy, but there is a raging tiger under the seat, waiting to bite at the first mistake.’”

Luckily, Chretien has not ended up as a barbequed frog kebab, and we can only wish him continued good fortune in his endeavors.