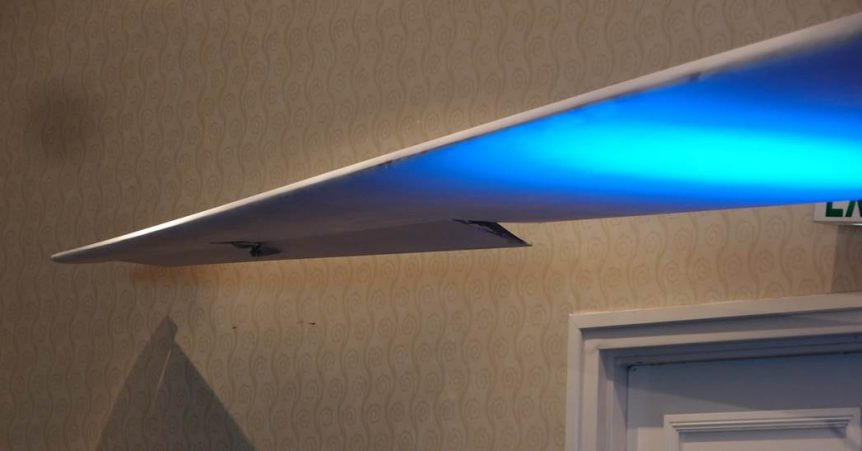 The Seeleys and SA board members did themselves proud for this year’s Sustainable Aviation Symposium.  Your editor visited the grand ballroom in the San Francisco Bay Pullman Hotel the night before the meeting was to take place.  All the tables, chairs and stage were in place, but the room was otherwise bare.  Early next morning, your editor trudged downstairs again, to be met with an astonishing sight.  At the back of the ballroom, a pair of exotic geometric shapes glowed in blue and green lighting.  Somehow, a 50-foot wing and substantial streamlined shape had materialized overnight.  Already, attendees were peering up at the extremely twisted tips of the wings and trying to analyze what they saw before them.

These elements comprise a pairing of what may be the two lowest-drag objects in aviaton.  Their goemetic purity evoke those kind of aspirational feelings reportedly felt by attendees at the 1939 World’s Fair when they saw the Trylon and Perisphere – two massive symbols of the future.  The 610-foot-tall Trylon (triangular pylon) and 180-foot diameter Perisphere (from the Greek meaning all around, or enclosure) guided fair goers to “The World of Tomorrow,” the show’s grand theme. 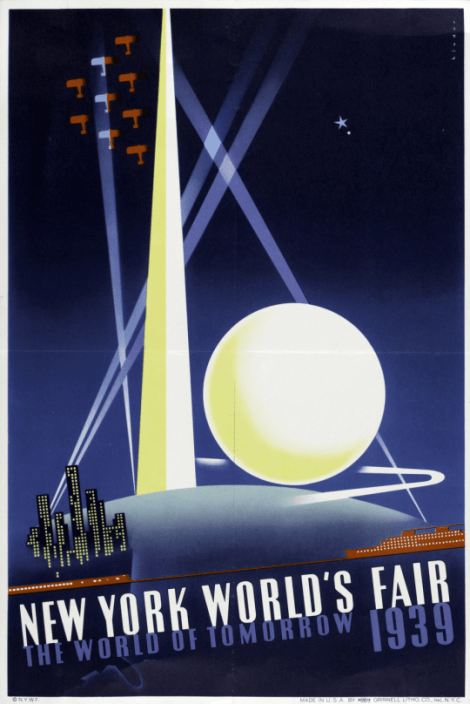 Perhaps our symposium will help guide aeronautical hopefuls to our World of Tomorrow.

The wing designed by Al Bowers, Chief Scientist at NASA Armstrong Flight Research Center, and built by Erich Chase, a master boat builder from Petaluma, represents Al’s persistent attempts to gain recognition for a different approach to wing lift distribution espoused by Ludwig Prandtl, a NACA aerodynamicist in the 1920’s and ‘30’s.  Prandtl thought lift should rise in the center of the wing span, then gracefully fall away by about 2/3 of the way toward the wing tip, tapering to nothing at the tip itself.  This describes a bell-shaped lift distribution curve, considerably different from the elliptical lift distribution almost all aerodynamic texts describe as most ideal. 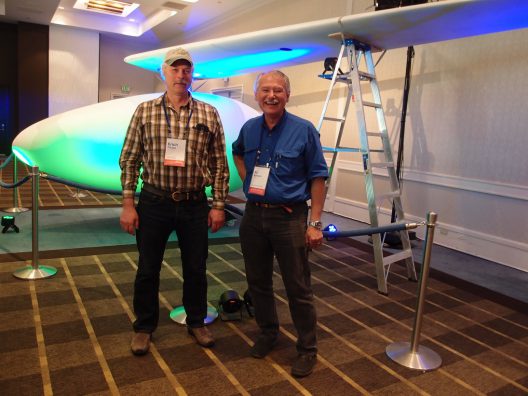 Al studied Prandtl and determined that following his theories led to extreme twist at the wingtip, 12 degrees or more.  A conventional wing can have from no to about five degrees.  This added twist, according to Al, provides proverse yaw – the wing wants to turn in the direction of bank.   Pilots flying conventional airplanes tussle with adverse yaw, the tendency of the outside wing to pull the airplane out of the turn.  Al says this is why birds don’t need vertical tails – evidence that Prandtl was right.  Al guided NASA interns who built several flying wings of up to 25-foot span and demonstrated their ability to fly as predicted.

Chase built a 50-foot version of the wing and brought it to the Western Workshop of the Experimental Soaring Association last Labor Day at Tehachapi, California.  The wing, at that point, had no structure to accommodate a pilot.  Erich fixed that with a rudimentary seat arrangement, which was test flown for eight flights by Steve Davey.  According to Chase and the video shown during Al’s presentation, the wing is extremely stable in pitch and yaw.  With a reasonable fairing to streamline the pilot, similar to a Swift, the L/D might be over 30:1.

The (NOT a) Goldschmied Fuselage*

With the type of fairing shown at the SAS, a seemingly incongruous, bulbous teardrop, the performance would be even higher.  Brien Seeley, President of the Sustainable Aviation Foundation, somehow talked his wife Anne, sons Damon and Tim, Tim’s girlfriend Cheryl Jenkins, and board members Wayne Cook and his wife Liz, into constructing a superbly streamlined fuselage that would seat two side-by-side.  The team worked six weeks, day and night to finish by symposium time.  Crafting a huge female mold in halves, with plywood formers and long foam strips cut from 4×8-foot blocks of foam that were then attached to the formers, the crew applied fiberglass cloth and resin to the molds to get the proper shape.  The pulled sides were assembled with some interior structure to help stabilize the form for display purposes. 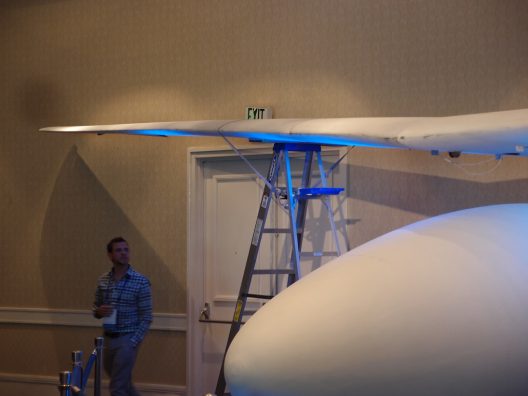 In actual use, according to a talk given by Wayne Cook, the fuselage would be attached to the wing by a single pylon, very much like the pylon that holds the wing above Erick Raymond’s Sunseeker Duo.  Two large multi-blade propellers would turn slowly and quietly for propulsion on this electric commuter – or cargo ship.  The combination of a low-drag wing and revolutionary low-drag fuselage would mean economical transport.

Going full tilt on laminar flow, the fuselage would have no openings forward of the first two-thirds of its length.  Passengers would be seated on a cart-like carriage that would be rolled into the forward part of the plane, with the rear fairing closed behind them.  That would place them before a panoramic windscreen.  When they landed, the cart on which they are seated could power them to the nearby ground destination, avoiding the trouble of having to call a cab or Uber. 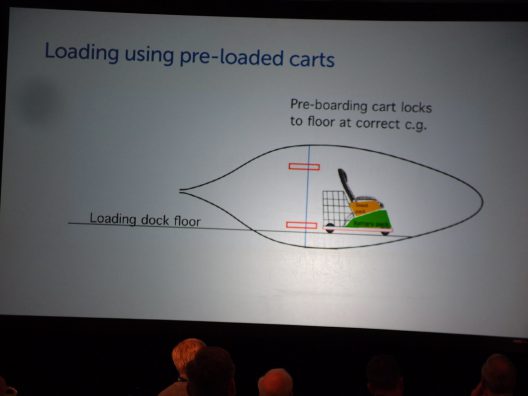 Wayne Cook explained how rear of fuselage opens to preserve laminar flow on nose. Pre-loaded carts roll in with passengers or cargo

This highly creative combination of academic and physical discipline resulted in a stunning display that set attendees’ minds in a properly aspirational direction.  Like those stunning geometries at the World’s Fair, these shapes evoke an aspiration for the efficiency that will make sustainable aviation a reality.

*(Editor’s Note: The fuselage was incorrectly identified as a Goldschmied form by this editor.  Dr. Seeley has provided a correction on this that will be shared in a longer form soon.)