Stephan Boutenko, Alternair President and founder, seeks a Light Sport Aircraft alternative, an airplane looking like an LSA, but loaded with features that will allow it to keep pace with the rapidly changing options coming to electric flight.

Inspired by Yuneec’s E-430 but disappointed by its slow cruising speed, Boutenko was determined to create something more in line with LSA performance criteria. He also wanted to take advantage of the knowledge he had gained from years of experience with heavier aviation to create an integrated system that would allow flexibility and expandability in the development of his airplane. Unabashedly conventional in appearance, the low-wing, tricycle geared monoplane is conceived to make a pilot transitioning from an internal combustion powered machine feel right at home. The motor control electronics (MCE), for instance, are redundant, and the key-operated switch on the instrument panel has an OFF/ L(EFT MCE)/R(IGHT MCE)/BOTH function, matching the ignition switch for dual magnetos. 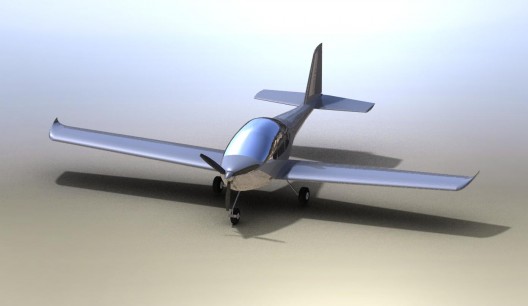 Beyond that bow to tradition, the inner workings of the Alternair Amp are anything but traditional. Its batteries, for instance, are carbon nanotube (CNT) lithium polymer packs, able to power the 50 kW (68 horsepower) electric motor for two hours, enough for local flying, or an excursion to the traditional $100 hamburger. Boutenko has considered the effects of weather and other unplanned elements in flight, so the airplane has a range of 200 miles at 90 knots (103.5 mph) with a 30-minute VFR reserve, or enough for one “go-around” at the destination airport. This projected performance is based on the need to use all 50 kW for takeoff, 11 kW to cruise at 90 knots, and a total battery capacity of 34 kilowatt hours (kWh), distributed among a 10 kWh pack in each wing root and a configurable 14 kWh pack behind the passenger compartment. An aerolastic propeller flattens in pitch during full-power takeoff and takes on a coarser pitch at the 11 kW cruise power, giving the effect of a constant speed unit and helping allow the efficiency necessary for electric flight. 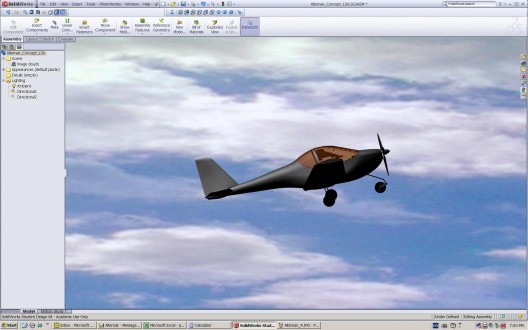 Further tracing the electrical heart of the craft, flight and non-flight related components connect to a Common Core System (CCS), based on ARINC 664 AFDX (Avionics Full Duplex Switched Ethernet) architecture, which hosts functions required to operate the airplane’s various modules, while monitoring electrical, mechanical and software systems and recording faults. It’s the same software package used on Airbus, Boeing, and now Bombardier airplanes. These records are stored in the Aircraft Health Management Function (AHMF) and can be uploaded to the maintenance laptop for review. The system alerts the pilot of any flight-critical faults through a10-inch display, one of two that can be mounted on the panel, along with a VHF radio, Mode S transponder, or GPS receiver. Optionally, the panel can hold an iPhone or Touch to display an electronic checklist. The display function (DF) can also display and accept entries on the aircraft and maintenance logbooks.

All this electronic wizardry will be transparent to the pilot, who will see a carbon-fiber aircraft with a gross weight of 1,320 pounds, payload of 440 pounds, and performance that emulates the LSA ideal.  Able to lift off in 450 feet and land in 500, the Amp is designed for at least a 600 feet per minute climb (with refinements – 800 fpm), a 43 knot (49.5 mph) clean stall speed, and 39 knot (45 mph) stall with flaps, making the 37-foot wingspan craft easily managed by the average pilot. Batteries comprise 550 pounds of the total aircraft gross, the structure and motor 330 pounds.

Attention to detail and carefully thought out power management and flight profiles are essential to the development of successful electric aircraft, and it’s clear that Stephan Boutenko and his talented crew have thought things through with depth and precision. Like all startups, Alternair is looking for funding and sponsorship for its possible participation in the Green Flight Challenge and the Lindbergh Electric Aircraft Prize (L. E. A. P.) This practical, user-friendly airplane, with an operating cost that Boutenko estimates at 20-percent of its gas-powered competition, will undoubtedly win friends when it shows up at the local airport.