Dr. Andrew Frank of the University of California at Davis and Greg Stevenson of GSE, Inc. discussed Efficient Drive Trains at the fourth annual Electric Aircraft Symposium on April 23, 2010.  Their detailed look at a 75-kilogram (165 pound), 36 kilowatt (48 horsepower) power system for a high-performance sailplane gave attendees a clear look at what can be accomplished with off-the-shelf components, especially if the shelf is in either presenter’s warehouse.

Dr. Frank, teaching and mentoring in the University’s Mechanical and Aeronautical Engineering Department, has been dubbed the father of the plug-in hybrid vehicle (PHEV), and has fielded winning teams for the Shell Eco-Marathon, with lightweight cars that obtained up to 3,500 miles per gallon.  The base two-horsepower Briggs and Stratton engine is modified with fuel injection and a higher compression piston, and the 150-pound, supine driver  accelerates the pencil-thin vehicle to 21 miles per hour and allows the car to coast down to 11 mph before accelerating again, to achieve an average of about 15 mph.  The mass of the car acts as the energy storage device for the bicycle technology vehicle.  This “pulse and glide” approach seems to approximate what happens in motorglider flight, and may be instructive for squeezing some range records from aircraft.  Dr. Frank is currently involved in devising larger fuel-efficient vehicles, such as plug-in hybrid city buses that would achieve high passenger-miles-per-gallon.  His vision includes using electric vehicles to store energy and feed it back into the grid on demand, balancing the grid’s load and reducing the need to over-buy energy in advance to meet anticipated peak demands.

Greg Stevenson has been designing and manufacturing gem-like internal combustion engines for years, ranging from half-horsepower miniatures to 12-cylinder, horizontally opposed Diesels that generate up to 450 horsepower.  His 15,500 square-foot shop in Lake Tahoe, Nevada is equipped to prototype just about any imaginable engine configuration, and based on the company overview, has.

He notes that Diesel has a 40 percent advantage in fuel use over gasoline engines, and that with the “imminent” loss of low-lead aviation gas, will become the default leader in light aircraft power.  Using bio-Diesel, with its high cetane rating, will bring further economies, and combining his IC engines with electric motors in a hybrid combinations will enable even greater power and range. 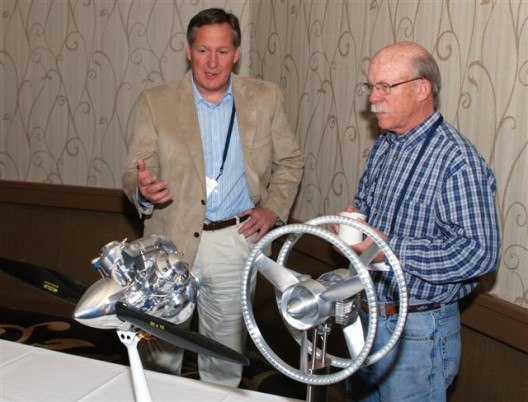 The pair envision an aircraft capable of meeting Green Flight Challenge requirements for obtaining 200 passenger miles per gallon at 100 miles per hour with a 600 kilogram (1320 pounds – within Light Sport Aircraft criteria) motorglider capable of taking off on the parallel hybrid* power package’s full 36 kW and cruising on 12 kW.  It would have a healthy rate of climb, enabling the craft to reach 1,000 feet in only 3,000 feet following brake release.

This U2-type climb would be topped only by the fuel economy possible with the package, which would sip 200 grams per kilowatt hour, or 2.4 liters per hour at its 12 kW cruise setting.  The engine has a specific fuel consumption about two-thirds that of more conventional Diesels, partly due to its thumb-sized turbocharger, capable of 100,000 to 200,000 rpm and of providing sufficient boost to provide sea level air pressure to the engine at any altitude.

A 15 kg, UQM-350 motor provides 21-24 kW, but draws from a small, two-kilowatt hour battery pack that adds only five kg to overall weight.  This reliance on coupling the IC engine and motor reduces the need for battery assist, and the clutch mechanism allows combining the power of the two power sources as needed. 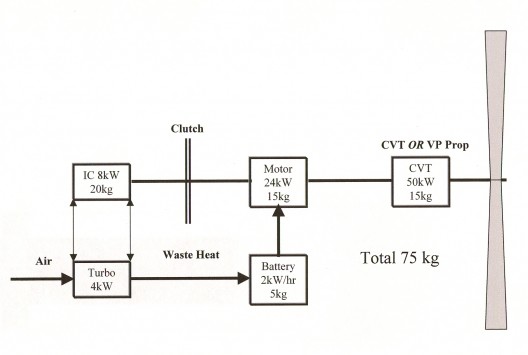 At the output of all this power, a continuously variable transmission or a variable-pitch propeller will allow the motor to turn at its most advantageous speed, conserving energy that would otherwise be wasted on an inefficient overdriving of the motor or in spinning thrust away with an inefficient prop.

Combining these off-the-shelf components in a creative way enables tremendous economy of operation.  Dr. Frank estimates that the proposed motorglider, cruising at 100 mph on 2.4 liters an hour, could make it around the globe on a mere 125 gallons of fuel.  Until Solar Impulse does it on sunshine alone, such a bird would be the fuel mileage champion, besting even a motor scooter’s fuel burn for the same distance.

*Dr. Frank explains that a parallel hybrid system combines the power output of both the IC engine and electric motor to provide power – to the propeller in this case.  This is similar to the systems used in the Toyota Prius or Ford Fusion hybrids.   In a serial hybrid system, the engine powers a generator which recharges the batteries to run the motor or motors which provide the motive force.