A Japanese entrepreneur and Salesian Polytechnic, a school near Tokyo, Japan are testing an ultralight glider with hopes of achieving solar-powered flight by early next year.

He has crafted several airplanes, including a Graham Lee Circa Reproductions WW-I Nieuport-11 replica for which he provided technical assistance, but go on to include an anime-inspired bird-like creation to two electric aircraft, one of which may become Japan’s first solar-powered airplane.

Yon-Ko’s work with The OpenSky M-02 jet-powered glider was inspired, as explained in Wikipedia, ”by the Möwe aircraft flown by the protagonist in the Hayao Miyazaki anime, Nausicaä of the Valley of the Wind.”

It’s shown below in jet mode, attempting high-speed taxis, but seemingly a bit unstable. As Yon-Ko explains, “Currently, the work of Mr. Kazuhiko Hachiya, [the] M-02 is housed in the 21st Century Museum of Contemporary Art,” appropriate for an airplane inspired by a work of art. Equipped with a jet engine and modified landing gear, the M-02J suffered engine damage during testing and the project was suspended, although there are hopes that it will be resurrected.

The OEX-01 is a canard test bed for electric power, aiming for light weight and low resistance, “To avoid overburdening the power.” OEX-01 is made of fiber-glass reinforced plastic and wooden semi-monocoque construction. 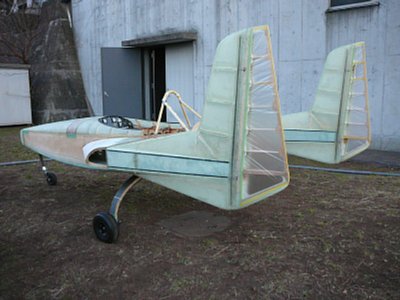 OEX-01 on the gear and ready for its electric motor

Salesio-1, the current project, is a product of Olympos and Salesian Polytechnic, and is being tested as a glider, with emphasis on gaining stability and then fitting the airplane with an electric and controller supplied by Mitsuba, Inc.  The airplane resembles an ultralight version of Burt Rutan’s 1982 Solitaire self-launching sailplane.

Note the unique form of bungee-cord launching, which the company is happy to describe to those interested.

The 01 looks a great deal like a light version of Burt Rutan’s Solitaire motorglider, but is larger.  Olympos and polytechnic students are working on the power system, with the goal of flying Japan’s first solar plane, “and good luck to all of us next spring.”

As noted above, the project receives help from Mitsuba, a manufacturer of electric automobile accessories and motors for solar-powered vehicles. As part of a team of students and professionals, they assisted the Tokai University solar racing team in winning the trans-Austalia solar car race in 2009, transiting the 3,000 kilometers (1,860 miles) in 29 hours, 49 minutes, averaging over 100 kilometers per hour (62 mph). 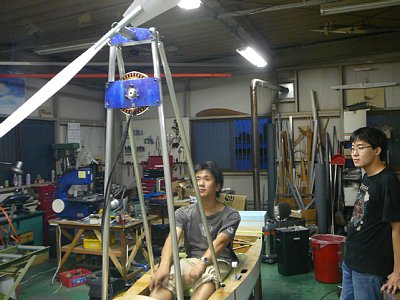 Olympos makes plans available for 49,000 yen (about $640) for a complete set, although different segments of the plans can be purchased separately. These highlight the ultralight construction, with fuselage parts looking a great deal like the lightweight rowing shells used in competition. Yon-Ko has also written a book showing ultralight aircraft construction techniques, although it looks as though it is available only in Japanese.

The designer, as with so many of these projects, is looking for investors to help supply solar cells to make the planned ambitions a reality.