Or at least an approach to provide angst-free cross-country flying, as Michael Friend explained in his Electric Aircraft Symposium presentation last April at Rohnert Park, California.  Friend, a Boeing engineer closely tied to the company’s early fuel cell work, is the owner and pilot of N787M, one of the earliest production kit Silence Twisters.  The Twister is a Spitfire-like, retractable-gear light aircraft capable of cruising 146 on its Jabiru 80-horsepower engine.  It’s capable of full aerobatic flight, and was converted to electric power in Germany for possible airshow demonstrations.  The Twister’s designers also plan a lengthened wing that would make motor gliding possible. 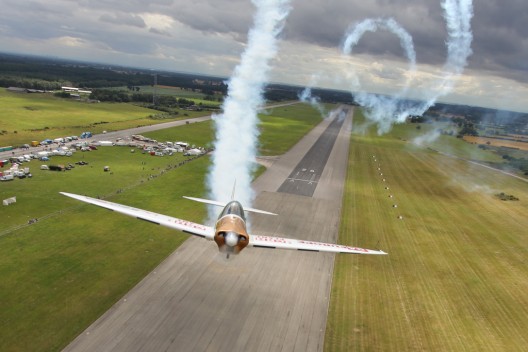 Silence Twister living up to its name

Friend noted the difference in energy density between available batteries and gasoline, explaining that 10 kilograms of gasoline (22 pounds – or about 3.75 gallons) had the energy of 450 kilograms (990 pounds) of lithium batteries.  The gasoline cost $10 (April prices) while the battery pack cost $36,000.  Despite the fact that the batteries will run through at least 1,000 cycles and the gasoline is totally consumed, there is still a significant energy density gap.

Friend applies his solution to a long-winged Twister, and has designed a serial hybrid system that puts an engine/generator/extended-range gas tank in a range extender pod under the airplane.  The pod does look like a World War II drop tank, adding a rakish look to an already rakish airplane.  But it adds a utility to the electric motor that would spin the propeller.  Friend planned for a Yuneec motor and six Yuneec battery packs in his electric version (about 1.5 hours total endurance), and the pod would allow long cross country trips in either soaring mode or in high cruise mode. 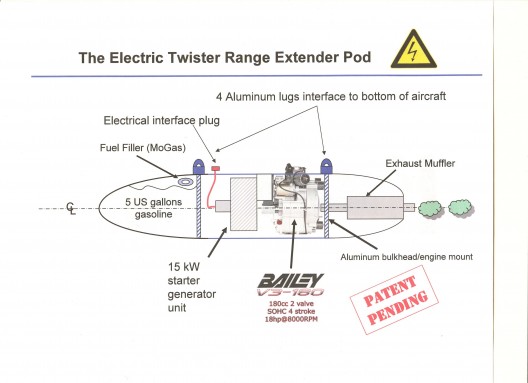 As a motorglider, for instance, the airplane would climb for 10 minutes, reach 3,000 feet on about five kilowatt-hours of electricity (30 kW for 10 minutes), and cruise with occasional thermal help on only 15 kW for one hour at about 80 miles per hour.  During its descent on this hypothetical mission, the motor would use only 5 kW for 10 minutes – and might even recharge batteries through regeneration.  The total flight would consume 20 kilowatt hours of electricity.

As shown in the chart for long-range flight, a three-hour cruise at 5,000 feet would require a combination of battery and gasoline powered energy input to the primary motor.  The flight would consume 50 kilowatt-hours (20 from batteries and 30 from the range extender pod) of energy, but would give a high fuel mileage while giving the airplane a high degree of utility. 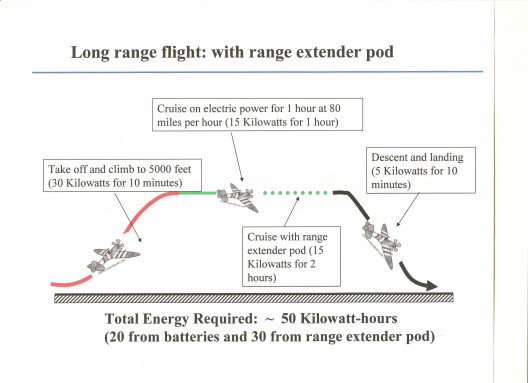 Friend concluded his talk noting the current state of battery development and his potential expansion of electric aircraft range.

“Battery technology available to the public at an affordable price will not allow an electric aircraft the range required for practical cross-country flight in the near future.

“The use of a removable range extender pod might allow angst-free cross country flying while retaining the wonderful benefits of an electric propulsion system.”

Besides, his solution looks too cool to ignore.