A recent news item on National Public Radio caught this blogger’s ear, and showed the increasing number of companies attempting to control an otherwise uncontrollable growth of plastic waste. 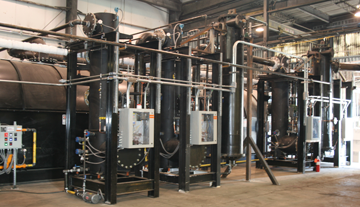 JBI’s process uses consumer waste plastic bags (the so-called “T-shirt” bags in which shoppers carry groceries to their cars, Number 5 automotive plastic, food containers and even plastic gas tanks and wine bags.  These are fed onto a conveyer system in JBI’s Niagara Falls, New York plant, where they are loaded into a hopper that can accommodate 4,000 pounds per hour of waste plastic.  The material flows through an apparatus, 120 feet long, 10 feet wide and 20 feet high, which first preheats and liquefies it.  Semisolid materials are separated, and the liquid goes to a reactor, where up to 86-percent hydrocarbons are removed to further processing.

At this point, light gases such as methane ethane, butane and propane (about 12 percent of the output, according to the company) are fed to the furnaces for fueling the process.   Fuel oil and Diesel are condensed and sent to temporary fuel tanks.  Further refining takes place and produces high-quality fuels that emulate those produced through normal refining processes.

A final two-to-four percent comes out as a “petcoke” carbon black residue, which cannot be safely put into landfills.  It does have a heating value of 10,600 BTUs per pound, though, and can be used by steel mills to fuel blast furnaces.

JBI claims, “The emissions documented by CRA from the P2O stack test were lower than what would be produced by the same test on a natural gas furnace of similar size,” and put almost 16 percent oxygen back into the air.

John Bordynuik, head of his self-named company, says that it costs $10 to produce a barrel of Number 6 fuel oil from plastic waste, oil which can sell for $100 a barrel.  This is enticing to investors, with the company recently starting a second production line.  It’s also brought the unwelcome attention of the Securities and Exchange Commission, who cited the company for over-valuing its assets to raise additional investment funding.  Even their highly productive line, which squeezes 90 percent oil from every pound of otherwise unrecyclable plastic, is sometimes mischaracterized as “synthetic,” leading to some buyer resistance.

How well the company weathers these tempests will help determine how JBI, Inc. and other innovative startups in the energy field fare in the long term.  We wish them all well.